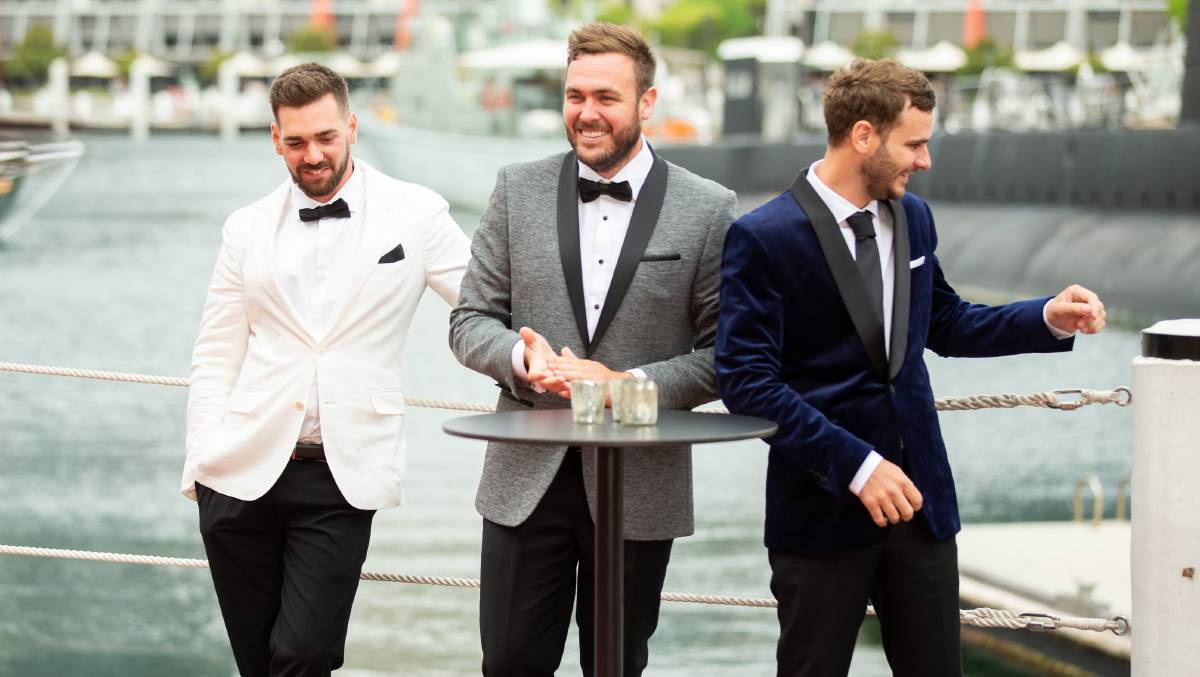 FWFWW 8: Ep 11: Andrew and Sam dig holes for themselves the size of Darling Harbour.

TUESDAY night's episode of Farmer Wants A Wife is all about honesty and fun times in the "big smoke".

Except if you are "Farmer" Sam or Farmer Andrew.

They don't know if they're Arthur or Martha by the end of the whole shambolic evening.

As the 2021 finale looms, all the farmers and their last two women head to Sydney for a night out on the town.

Just to keep you updated, Farmer Will has narrowed his team down to Canadian Jaimee and Kristina, Farmer Andrew can't decide between Ash and Jess, Farmer Matt has (somewhat controversially) chosen Runaway Tara and Alex, "Farmer" Sam thinks either Mackenzie or Allanah might be the one for him, while after an exhaustive search on Nat's part, Farmer Rob has brought along Vici and Kate.

The terms "big smoke" and "glad rags" are given an absolute flogging throughout, while honesty is undoubtedly the theme of this episode.

Oddly, Michael Buble serenades us in the opening scenes where everyone is being super optimistic on the final day of the farmstays.

Over at Will's place everything is rosy with the girls.

However, the show seems to have taken its toll on his pig, which hobbles out at the break of dawn and looks like me after a massive night on the turps - bloated, crotchety and stumbling up the driveway squinting into the light.

In the Snowy Mountains, Rob is again galloping his horse across the paddock for no particular reason, which after so many of these scenes is surely fit enough for the spring racing carnival. 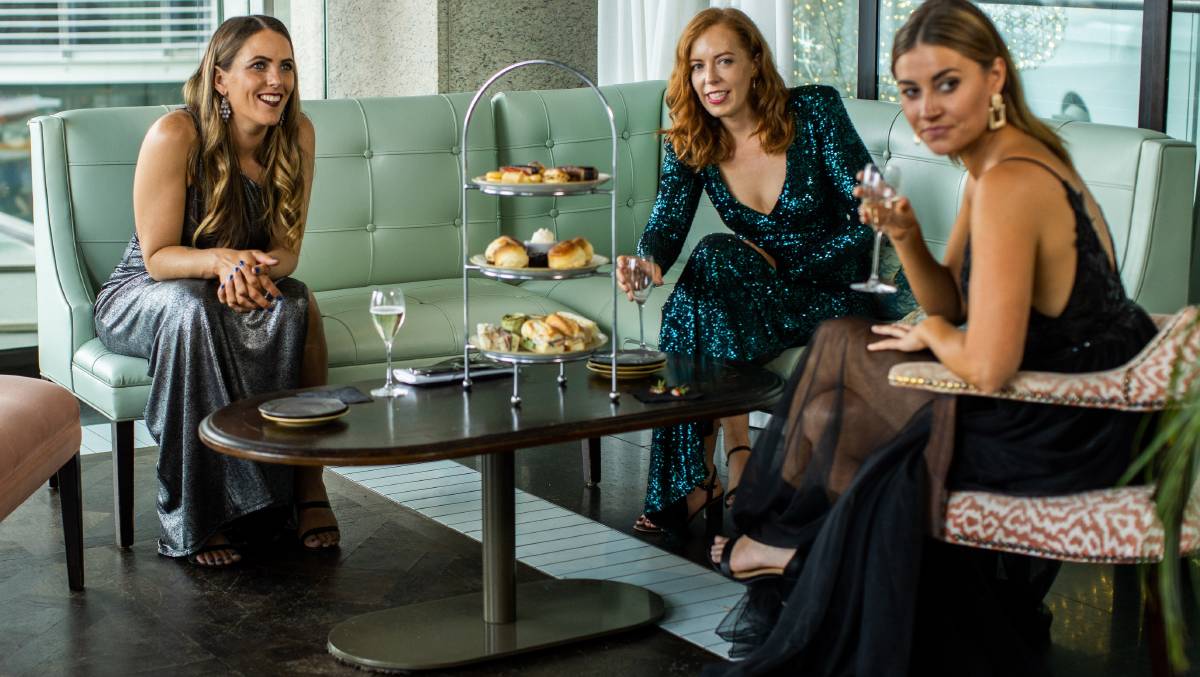 Vici rides Robert. I should clarify this is the horse's name, and not to be confused with her farmer.

She then proceeds to suggestively liken the comfort of her saddle to the same comfort associated with not wearing underwear.

"Crikey," Rob exclaims. We all agree.

We are then treated to a replay of Andrew achieving the new land speed record while fetching firewood the night before, after Jessica dropped the "L" word.

"Wood......I need wood," he babbled before disappearing into the dark and attempts to block the kiss he shared only minutes earlier with Ash from his living memory.

Jess' ability to get that sort of speed out of a virtual track and field unknown would be the envy of many athletics coaches in Tokyo right now.

Over at Canowindra, "Farmer" Sam and Allanah are doubling on the motorbike.

Allanah is wearing what is arguably the largest, white safety helmet ever manufactured.

What. A. Night. 😱 The Farmers took the city by storm with their ladies... now it's time for them to make their big decision! Who will find real love? 🤠❤️ #FarmerAU Final is tomorrow. 7.30 on @Channel7! pic.twitter.com/B0AgsB3pbq

She looks set to orbit the earth.

I normally get edgy when Rob gathers the masses, but there's no need for that tonight.

It's quickly becoming apparent that Sam is the one we need to be wary of.

The time has come to leave the farms.

They all trundle out the front door and awkwardly drag their rolling suitcases across the lawn and gravel.

Will one of them just pick the thing up and carry it?

Sam chauffeurs the terrified Matt and Andrew into the city, where he fails to indicate while changing lanes and runs a pedestrian crossing.

He tells us it's a "whole different ball game here; you don't get this in Orange". 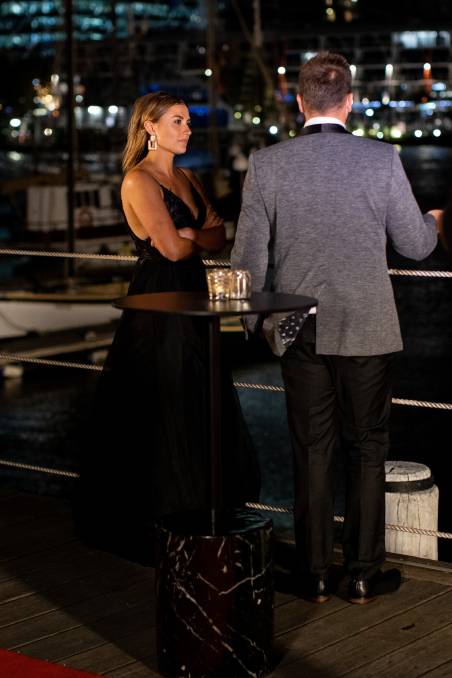 SNOG ENVY: Jess gets crabby because Andrew didn't tell her he pashed someone else. Does anyone recall a pash pact, or is that just me? Photo: Channel 7.

I dunno? It must still be horse and cart in Orange.

White knuckled Matt and Andrew should have grabbed Allanah's helmet before getting in.

All the valet staff are sent running for cover as Sam pulls up at the motel.

Then the fellas settle in for a beer and pre-game pep talk.

Andrew tells them all about the pickle he's found himself in with Ash and Jess and the kiss, and the firewood and how he really should be in Tokyo right now.

The boys lap up the goss (remember this for later).

Meanwhile, the remaining clutch of women are paraded out in their glad rags.

Runaway Tara takes the opportunity to stick her nose in Jess' business and tells her that Andrew and Ash kissed again.

Jess doesn't take this well. Just like the first time she heard about them locking lips.

Cut to the farmers marching in donning some questionable outfits.

Nat assembles them all for pre-dinner drinks and I wish someone would fetch Allanah a step ladder to stand on. I can barely see the little poppet over the high table.

Nat tells them the time is nearly nigh to choose the winner and she really emphasises the importance of honesty.

While Andrew sniffs the air. He has a nose for drama.

Nat asks Andrew about his take on honesty, to which he replies: "It is the building block of a relationship".

Jess looks like she wants to knock his building block off.

We arrive at dinner and plonk ourselves down at the tables. Or the final supper if you will.

Farmer Andrew picks up the menu, which of course is not a menu but instead a series of pre-prepared questions.

Farmer Andrew looks like he might just pole vault over the restaurant balustrade and into Darling Harbour.

A producer really should remove all the sharp objects from Jess' reach.

Rob, who rounds out his vowels beautifully, asks the women to recall their favourite moments from their time on the farm. They become nostalgic and cast their minds back three days to when they first ran out for the reserve team.

It's all "fun times" over at Rob's table, which is in stark contrast to Andrew's, where Jess looks ready to flip the table.

We bounce from table to table listening in on the ominous QandA session.

Farmer Andrew is working his way through the list, when Jess calls out his dishonesty.

It dawns on him what this is about.

After leaving the table, Andrew tells us "water is wet, the sky is blue and girls talk".

Might we remind you Andrew, that you also spilled your guts about the whole debacle to your mates earlier today!

They have a chat outside, where all the details of the kiss are revealed.

She asks why he didn't tell her and Andrew apologises and tells her he should have.

In Andrew's defence, he did tell her about the initial kiss with Ash and it was not exactly met with applause.

Everyone at Sam's table is having a terrible time.

Allanah asks him if he is ready for a relationship and he nearly rolls off his chair.

"Next question," he demands.

The next question is not much better.

She eggs him on to be honest; it is after all tonight's theme.

With that, Farmer Sam walks out, but not before grabbing his empty wine glass.

There's nothing much to report from Matt's table.

Except for a strange exchange where Runaway Tara sings Alex's praises, to the point where it appears she is trying to convince Matt to choose Alex.

Their responses are as icy as that water that Farmer Rob was baptised in last night.

Matt throws her what is undoubtedly the most suspicious look of this series.

He discreetly shuffles his chair a little closer to Alex.

We skip through yet more Lady Shake ads, before returning to the restaurant where by now half the group has up and left for private conversations between themselves, the film crew and the rest of the nation.

There are hearts breaking left, right and centre.

Several people are left in tears with the film crew hastily chasing all the bolters around Darling Harbour.

Sam decides to lay his cards out on the table, and after much mumbling, fumbling and stammering, tells Allanah and Mackenzie that he only sees a friendship with them.

Their responses are as icy as that water that Farmer Rob was baptised in last night.

Friendship is not on the cards my friend.

We return to Andrew's table where he is sitting alone.

Ash tells us she is "p*&^%$ off" twice; she returns and it is now obvious that he has both girls offside.

He reminds us for the hundredth time how hard this whole exercise has been.

And let that be a warning to any farmer, or non farmer, out there considering applying for this program, that while a brood of women all vying for your attention may sound appealing, you may just end up a dithering mess like Will's pig.