Cattle from the South West region showed the benefit of the longer growing season in weight and quality, while stock from out of this region trucked to the sale did not have the same weight or bloom, but appealed to graziers.

Following the red hot pre-June 30 sales, values overall did ease a little but still saw vendors pleased with their returns.

Beef steers selling liveweight topped at $2510, actually $2 above the June result, but lower in cents per kilogram with lightweights topping at 580c/kg, indicating being heavier animals. Beef heifers were in low numbers, selling to $2044, well down but reaching 554c/kg which was 30c/kg up, showing lower weights.

Appraisal Friesian steers sold to $1390, while dairy poddies took the major drop when selling to $1100, with these of lesser quality when compared with other sales.

Just a single cow and calf were offered and this sold for $2750. 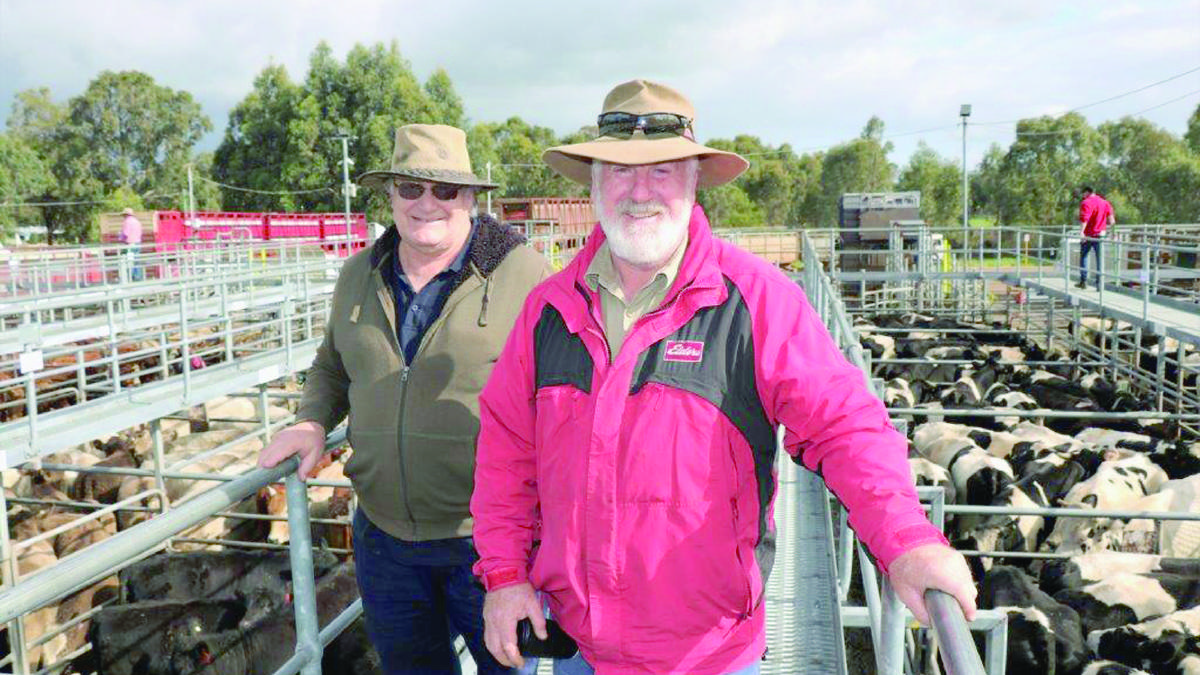 Neil Gilbert (left), Ludlow, caught up with Robert Gibbings, Elders Capel, before the sale at Boyanup.

The beef steers topped early when 10 Angus cross from Sunsure Pty Ltd sold to Kookabrook Livestock for $2510 when the 603kg steers sold at 416c/kg.

In the higher prices were three steers from L & M DellaSale that went to Harvey Beef for $2400 which quickly added a single grey steer from GS Brown for $2450, bidding to 490c/kg for the 500kg steer.

Steers from A & K Bashford, Busselton, attracted strong support when 10 Limousin cross steers made $2296, going to Harvey Beef which added the next five Bashford steers that cost $2357. 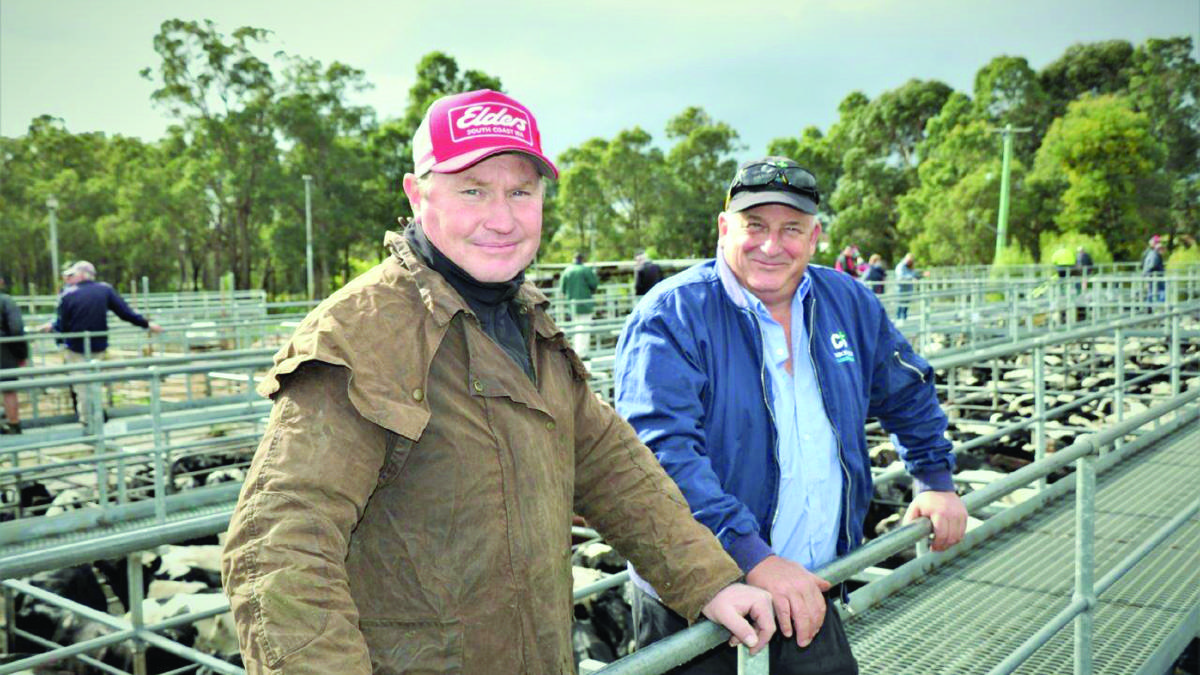 David Lindberg (left), Elders Albany, attended the sale at Boyanup and was pictured while talking with Steve Italiano, Brunswick.

In the lightweight steers a pen of 17 Red Angus from Cityshine Holdings weighing 176kg sold at 730c/kg to Elders Busselton to return $1288.

Following their success with steers, G & M Ferraro topped the heifers at $2044 when the eight weighing 444kg sold at 460c/kg to Galati Family Trust. 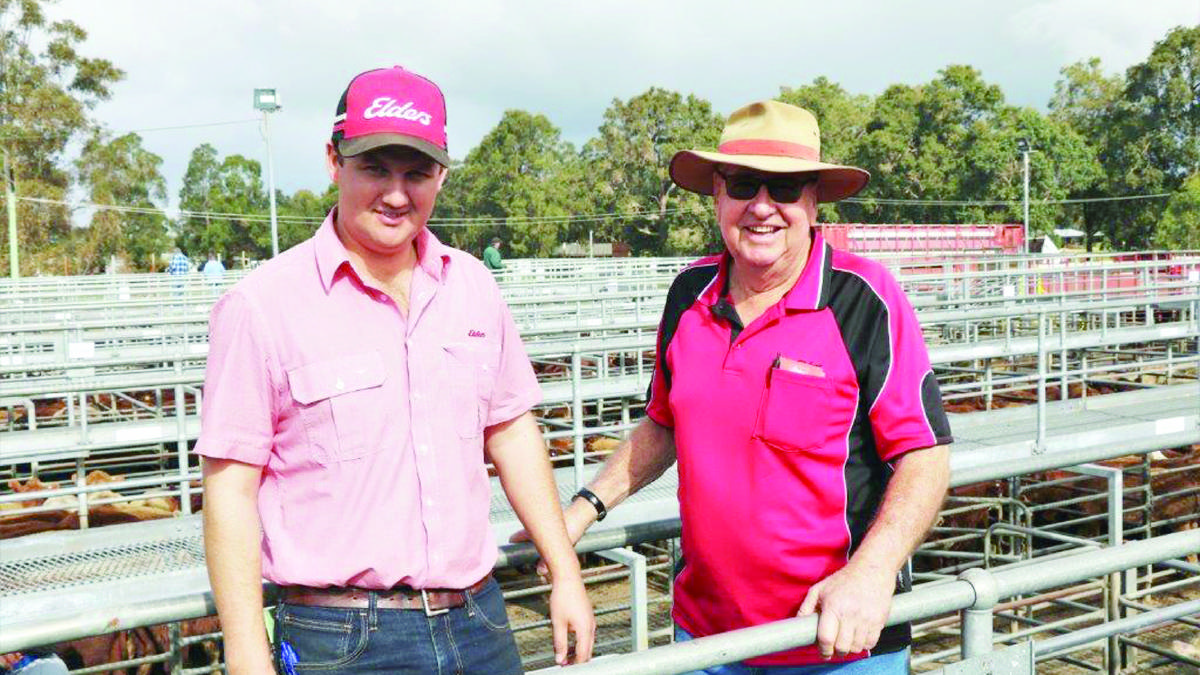 Next best were six Murray grey cross from DA & AE Thompson, Boyup Brook, that sold to Harvey Beef for $1903 at 470c/kg.

Two heavy Angus cross steers weighing 6456kg from L Pfitzner were snapped up by Kookabrook Livestock at 378c/kg to return $2438.

This duo teamed with another nine that made $2384.

Elders, Capel representative Rob Gibbings paid the top of 570c/kg for seven steers from TJ & RD Garstone to spend $1437 for the 252kg steers.

Dudinalup Pastoral, Nannup, had several pens of heavier Friesian steers and it sold two lines to VA & MP Wright, Dunsborough, for $2040 and $2019 at 370c/kg.

Mr Jones was busy, buying 12 pens for his client at this point of the sale, topping at $1824 for nine from Wirring Farm, Cowaramup.

Several pens of seven steers in each from M Tosano topped at $1805 when joining the load for Mr Jones' client.

Steers from Clive Elson were not far behind when they sold at 464c/kg to Elders, Brunswick representative Craig Martin to cost $1461.

The appraisal dairy steers saw a line of 16 from Jessmond Dairy take the top price honours at $1390 when bought by Nutrien Livestock, Donnybrook representative Dean Taaffe.

The lone cow and calf unit, from TJ & RD Garstone sold to Cameron Harris, Elders Manjimup, for $2750 to finish a sound sale.

ELDERS Margaret River agent and sale auctioneer Alec Williams said once again a good quality yarding of 1590 head was offered in the sale.

"Most categories throughout the sale eased in value, in comparison to June's frenzied buyer enquiry, with the exception of mediumweight Friesian steers which were slightly firmer.

"Heavy beef steers met with solid local and interstate enquiry to be equal to last sale too.

"Overall it was a good solid result, but not to the unprecedented levels seen in June.