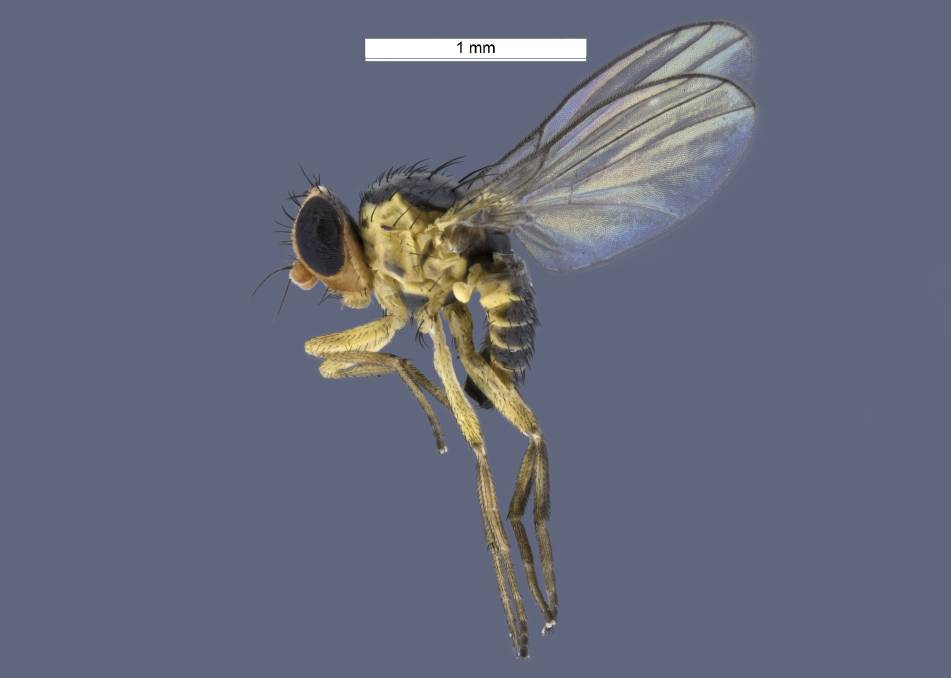 American serpentine leafminer adult flies are one to two millimetres in size, grey-black in colour and distinguished by a prominent yellow area at the base of the wings. Damage from the pest can be identified by twisting white patterns on the leaf surface.

It is a tiny fly whose larvae damage plants by tunnelling through leaf tissue.

ASLM is a tiny fly whose larvae damage plants by tunnelling through leaf tissue.

Leaf damage occurs through puncture wounds from the adult feeding and depositing eggs, as well as the larvae tunnel, or mine, within the leaf tissue.

The Department of Primary Industries and Regional Development (DPIRD) confirmed the pest's presence in WA from a sample collected near Kununurra last Thursday, as part of the Commonwealth's Northern Australia Quarantine Strategy surveillance program.

DPIRD is working with industry stakeholders and State and Commonwealth Governments to minimise the impact of the pest fly and its larvae on WA's primary industries.

The plant pest is wind borne and eggs, larvae and pupae can be spread through the movement of plant material, soil, clothing and equipment.

"This is the first time this species of leafminer has been found on the Australian mainland," Ms Broughton said.

"American serpentine leafminer, so called because the larvae tunnel in leaves creating snake-like mines, is known to feed on more than 400 species from 29 plant families, including most vegetable and legume crops, as well as ornamental plants.

"We are working with growers as we survey production areas in the northern half of the State to determine the presence and spread of the pest."

Grain Producers Australia (GPA) deputy chairman and national biosecurity spokesman Barry Large said grain producers needed to be alert about the recent detection of the pest and proactive with their monitoring onfarm.

"State and Federal biosecurity agencies are continuing to conduct surveillance and tracing activities, in order to determine the full spread of the pest - and grain farmers should also keep an eye out for any potential incursions in their legume crops," Mr Large said.

"Although the threat to the grains industry and cereal crops from this tropical incursion may be limited at this early stage, grain producers need to be aware of the potential risks and take necessary preventative actions.

"Growers are being urged to check and monitor their crops regularly for any signs of this plant pest which is regarded as a severe economic threat to our national plant industries."

The national technical committee, the Consultative Committee on Emergency Plant Pests, has concluded that while eradication may not be technically feasible, due to the pest's biology, current distribution and wide range of host plants, more surveillance and data was required to make a determination.

The committee agreed that there may be measures that could be undertaken to limit the spread of ASLM to other areas of Australia.

More information on the agreed course of action will be provided as soon as possible.

"The insect is known to develop resistance so insecticide treatments should be used that incorporate resistance management strategies to minimise that risk," Ms Broughton said.

"Overseas, management of leafminers, such as the American serpentine leafminer, include the use of natural enemies, such as parasitoids that attack larvae, so good management practices should consider the use of pesticides that favour beneficial insects."

Growers and gardeners are encouraged to monitor plants and to report any tunnelling leaf damage and suspect flies to the department to help demonstrate the absence and presence of the pest.

"American serpentine leafminer adult flies are one to two millimetres in size, grey-black in colour and distinguished by a prominent yellow area at the base of the wings," Ms Broughton said.

"Damage from the pest can be identified by twisting white patterns on the leaf surface, caused by the tunnelling activity within the leaf of the white-yellow larvae, however, this is indistinguishable from other leaf mining flies.

ASLM is widespread overseas, being present in North and South America, Asia, Africa, Europe and some Pacific islands.