An incredible consistency of bids drove Booroomooka Angus stud to an impressive average of $17,262 over an army of 232 bulls at their annual sale on Friday.

THE Bingara based Booroomooka Angus stud surpassed expectations on Friday, knocking down a full clearance of 232 bulls for a top of $48,000, an impressive average of $17,262 and a gross of over $4 million during their annual sale.

As two-year-old he weighed 836 kilograms and was sired by Landfall Keystone K132 out of the EF Complement 8088 daughter in Booroomooka Sarca N147.

Exhibiting a credible data set, he had eight traits in the top one per cent of the breed, including all selection indexes, 200-, 400- and 600-day weights and carcase weights, and was top 5pc or above for gestation length, days to calving and mature cow weight.

Dr Denham plans to use the leading sire over heifers.

Queensland based Yarrawonga Partnership and Buringal Grazing paid the second top price of $40,000 for Booroomooka Quilpie Q12, a son of Rennylea L519 that weighed 884kg and had 11 traits in the top 10pc of the breed. 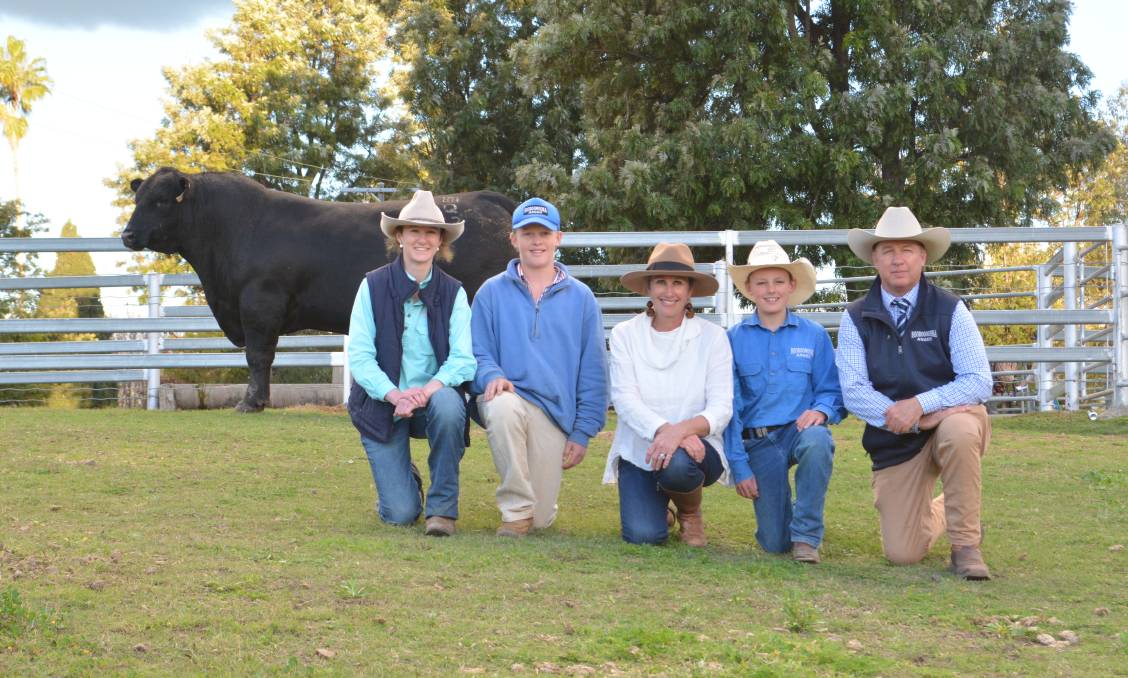 AuctionsPlus had a lot of the action with a total of 776 bids placed across 189 lots. There were 39 active bidders, of which 28 were successful in purchasing 66 lots of the sale. In total the 66 lots sold via the platform averaged $16,985 and grossed $1.12 million.

Two yearling sons of Rennylea L519 were bought to the front of the sale, a move that proved positive with both selling for $34,000 each.

Unskila Pty Ltd at Mihi via Uralla paid $36,000 for Booroomooka Beast Mode Q81 by the popular sire in Baldridge Beast Mode B074. Overall they took home three bulls for a $28,333 average.

Studs were active among the list of buyers, including Sprys Angus, Wagga Wagga, who paid $34,000 for Booroomooka Quadrant Q19, by Rennylea L519, and Tivoli Angus, Merriwa and Curracabark Angus, Gloucester which teamed up to buy Booroomooka Beast Mode Q264 for $32,000.

The most prolific buyer of the day was SC Nivison and Co, Walcha which bought 12 bulls for an $18,000 average. Phil (right) and Di Johnston and their manager Jeff Abott (left) of Maderty, Coonabarabran put together a draft of 10 bulls for their self-replacing purebred commercial Angus operation that consists of 800 breeders.

Phil and Di Johnston and their manager Jeff Abott of Maderty, Coonabarabran put together a draft of 10 bulls for their self-replacing purebred commercial Angus operation that consists of 800 breeders.

"We had bought from Booroomooka for a long time, then had a break for five years but the quality and number on offer drew us back in," the Johnston's said.

"We are in a rebuilding phase and because we are self-replacing we put a lot of emphasis on the maternal characteristics, good to moderate growth and we picked up a mix of heifer bulls, so low birthweight, and cow bulls.

"We were chasing a type rather than certain bloodlines or sire lines."

Running the farm in partnership with their son Scott, the Johnston's calf around three-quarters of their herd in spring and the remaining in the autumn.

"Our premium steers are sold into the feedlot market around the high 400 kilogram mark... they usually go to Mort & Co or Whyalla Feedlot," Mr Johnston said. "Surplus heifers are sold via AuctionsPlus." Luke Scicluna of selling agents Davidson Cameron and Co said the bids rolled through thick and fast with plenty activity from lot one through to lot 250.

Committed to breeding high quality cattle, Booroomooka principal Sinclair Munro said they were very pleased with the result and it was great to see support from local buyers right through to Tasmania, central Queensland and the Northern Territory.

"We are proud of the bulls, proud of the day, and proud of our staff and the people that bought bulls and made this day possible," Mr Munro said.

"The commercial support drove the average, but there was support right through with leading studs operating.

"It is rewarding to see legends of the cattle industry come and see the bulls, people I have looked up to growing up came back to see the Boorooomooka cattle. It makes me proud."

The sale was conducted by Davidson Cameron and Co with Luke Scicluna and Tom Tanner sharing the auctioneering duties across the draft.

Mr Scicluna said the bids rolled through thick and fast with plenty activity from lot one through to lot 250.

The story Stunning $17,262 average across 232 bulls at Booroomooka Angus first appeared on The Land.