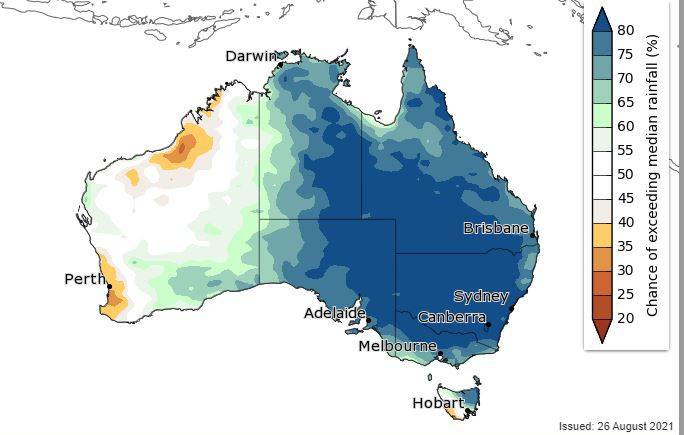 The BOM outlook for September to November has a very high likelihood of above median rainfall for eastern Australia.

Farmers were buoyed by good news in the BOM spring outlook this week.

FARMERS across Australia got the forecast they wanted to hear when the Bureau of Meteorology released its spring outlook this week.

The BOM has predicted a wetter spring across much of the country, music to the ears of grain growers.

And in a further happy coincidence the only major agricultural area set to be drier than average through spring is south-west Western Australia, where farmers have endured a sopping wet winter and are looking for warmer and drier conditions to ease the risk of waterlogging damage.

The BOM remains exceedingly confident of the above median rainfall, giving most of inland southern Queensland, NSW, Victoria and eastern SA a whopping 80 per cent chance of exceeding median rainfall over the three months of spring.

In the south of eastern and central Australia this is a very significant as spring is the wettest time of the year and critical for crop development.

While NSW is largely looking good there are some spots now looking for a drink while north-west Victoria and the SA Mallee things are very dry and farmers are looking for a good fall in a system predicted at the end of next week to maintain yield potential.

"Nationally, we've seen the wettest winter since 2016," he said.

"Australia's average winter temperature is also expected to be one of the ten warmest on record, particularly in the tropical north."

Dr Watkins said the main reason behind the Bureau's prediction for a wetter than average spring was a climate driver called the Indian Ocean Dipole (IOD).

"We've currently got a negative IOD - a phenomenon which typically brings an increased chance of rainfall to southern and eastern Australia," he said.

"This negative IOD is expected to persist throughout spring but is currently weaker than the last negative IOD event we saw in 2016, which brought Australia's wettest May-October period on record."

Another relevant climate driver, known as the El Nio-Southern Oscillation (or ENSO), is likely to remain neutral with no declaration of a La Nia event expected in the coming months, although some climatologists in the US are talking up the potential of a La Nina forming in coming months.

The BOM confirmed there had been some cooling in the tropical Pacific, but said a fully fledged La Nina was unlikely to form at this stage.

Maximum temperatures for September to November are likely to be above median for the northern tropics and far south-east Australia. Below median daytime temperatures are more likely for other areas of southern Australia extending up into southern Queensland.