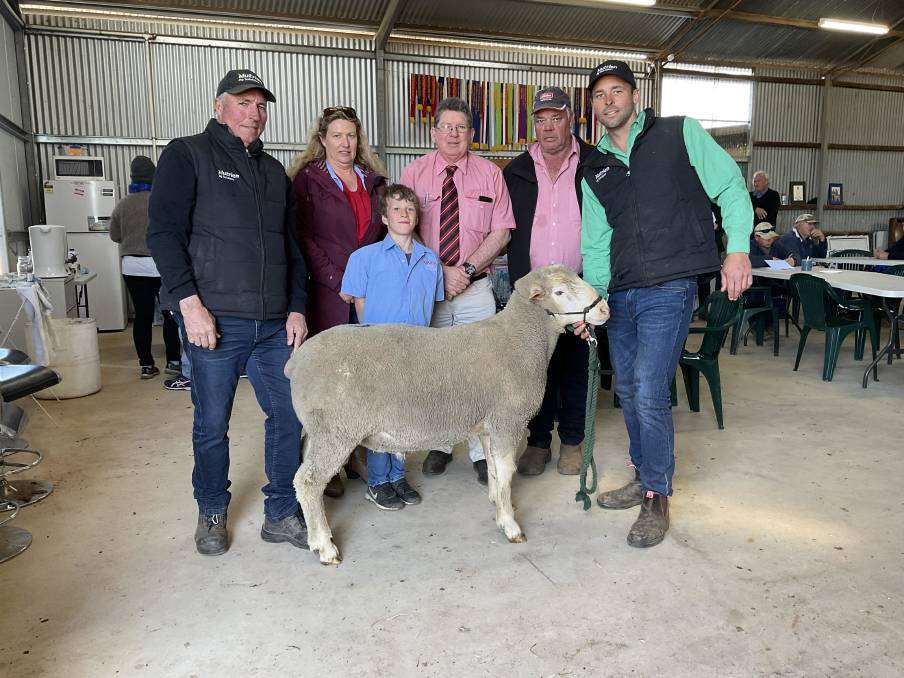 "The rams again displayed the carcase traits the stud is renowned for, while the wools were also very good."

THIS year's commercial ram selling season got off to a flying start at the Tiarri/Uralla on-property ram sale at Lake Grace last week where prices hit a high of $3300 and all the important sale indicators rose.

The stud again presented a quality line-up of well-grown, Prime SAMM rams displaying excellent carcase and wool traits and with a better season locally and further afield, the buyers weren't afraid to bid up on their preferred rams.

With the strong buying support, in the main from long-standing clients, right through the catalogue the joint Elders and Nutrien Livestock team had very little trouble clearing the offering of 140 rams.

When the final ram was knocked down by Elders auctioneer Preston Clarke, the 25 registered buyers, from not only the local area but also from as far north as Walkaway and south to Boxwood Hill, had cleared 133 of the 140 rams under the hammer at an average of $1356.

Elders stud stock manager Tim Spicer said it was a very strong sale for the Tiarri stud and well up on expectations.

"The stud offered a quality line-up of rams from start to finish and they were a credit to the Tiarri team and as a result prices followed suit and were strong throughout," Mr Spicer said.

"The rams again displayed the carcase traits the stud is renowned for, while the wools were also very good.

"The sale was again supported in the main by return buyers but there were a couple of new buyers operating, who had previously bought privately and this helped to maintain the solid competition.

"Rams that met the buyers' criteria and had better carcase traits and wool quality certainly met with strong competition and while there were strong prices throughout, there was still a chance towards the end of the sale for buyers to meet their budget as the competition dropped off as buyers filled orders."

Equally as happy with the sale result was stud principal Kelly-Anne Gooch who said it was great to see all their return buyers at the sale.

"We are really thrilled with the sale results," Ms Gooch said.

"It was extremely pleasing to hear positive feedback from the clients on their Prime SAMM lambing percentages and new season's lamb prices and results.

"Throughout the previous dry seasons, stock and pasture rotations have been an important and reliable part of many of our clients' management systems.

"This year's improved seasonal conditions have contributed to increased positivity among our buyers.

"Dams are finally full and producers are looking forward to not having to cart water over summer."

The tone for the sale was set early when the day's $3300 top price was recorded when a replacement ram went under the hammer in pen seven.

After a spirited bidding melee on the young ram it was knocked down to repeat top price buyers the Cobley family, R & R Cobley & Son, Walkaway, which has been buying from the stud for 10 years.

The 110 kilogram ram was sold with wool tests of 21.1 micron and 98.4 per cent comfort factor (CF), while its scan figures from August were 45mm eye muscle depth and 3.6mm fat.

The Cobleys also secured the sale's third highest price ram of $2700 when they bid to this value for the second ram offered in the catalogue.

Buyer Darren Cobley said he liked both rams as they were both well-structured, well-muscled rams.

"They are both good, thick, medium style rams and the type of rams we chase," Mr Cobley said.

"We like the Tiarri rams because they are very well-muscled sheep.

"They have good, wide, deep bodies and are not too leggy."

The family will use the rams in its 200-head nucleus flock to breed rams for its 2500-head pure commercial ewe flock.

Mr Cobley said they made the switch to using Prime SAMM rams in the early 2000s over Merino ewes and upgraded to a pure Prime SAMM flock from there.

"They are good, strong doers and they handle the tough conditions really well.

"They are also very fertile, this year we achieved a 130pc lambing to ewes joined and that included joining our 2020-drop ewe lambs.

The second top in the sale was $2800 and it was achieved twice.

The first to pay this value was repeat buyer IF & KM Walker, Newdegate, securing the ram in lot 48.

The second ram to sell at $2800 was catalogued in lot 78 and was purchased by return buyers DM & AL Major, Muntadgin.

Other buyers who were strong at the top end included repeat buyer Limeric Enterprises, Hyden, which averaged $1733 across a team of six sires which included a ram at $2600, while return buyer Tim Lloyd & Co, Newdegate, put together a team of eight to a top of $2500 and an average of $1750.

Kulin operation RA & SJ Dall was also not afraid to bid up on the rams it wanted, finishing the sale with a team of eight to a top of $2000 and an average of $1563.

There were four buyers, which put together double figure teams.

The biggest of these buyers were return clients of nine years Rod and Lisa Jackson, Rodenway Trust, Moorine Rock, who purchased 18 rams to a top of $1600 and an average of $1144.

Mr Jackson said they liked the Tiarri stud's rams because they were good, big-framed easy-care sheep.

"We like the Prime SAMM breed because they are hardy and can handle the tougher conditions of the eastern Wheatbelt," Mr Jackson said.

"You can also turn off their lambs quicker, which is something we are always trying to achieve as we don't want to carry them through if we don't have to and another bonus is they don't run to fat."

Last year the Jacksons made the move to mating all their 3000 Merino ewes to Prime SAMM rams for the first time and this year they will do the same.

"In the past we used to mate 50pc to Merinos and 50pc to Prime SAMMs but we decided to join all our ewes to Prime SAMM rams, because where we are we need to move the lambs off quicker as a result of the seasons getting shorter," Mr Jackson said.

"We achieved a 100pc lambing this year across the flock and we are hoping to this week turn-off our first line of lambs for the season.

In 2020 Mr Jackson said they sold 50pc of their lambs as suckers and the remainder were shorn and taken through on stubbles and sold in February, as they couldn't get the booking space in the spring.