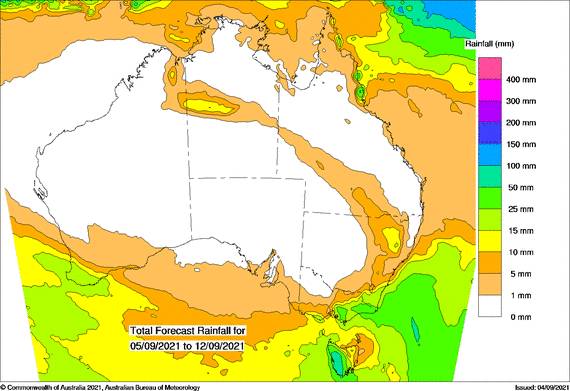 The Bureau of Meteorology's eight day rainfall forecast from September 5.

Frost is forecast for Eucla on Monday morning but high fire dangers are on the cards for the Kimberley later this week.

Frost was the word of the day with Bureau of Meteorology senior forecaster Miriam Bradbury on Sunday, with some areas of Western Australia and western South Australia set to wake up to chilly conditions on Monday.

Ms Bradbury said there will be frosty patches on the eastern New South Wales coast Monday morning as well, but that was anticipated to be "quite patchy".

On Tuesday and Wednesday a high pressure system will contract the frost to the south east - with the east coast of New South Wales and eastern Victoria in the firing line.

"We're not talking about a widespread, severe frost - it will be pretty patchy," Ms Bradbury said.

Ms Bradbury said for the most part, most of Australia will see cooler and dryer conditions than last week.

"Today the maximum temperatures are broadly four to eight degrees below September average across Australia," she said.

"And in parts of the central Northern Territory more than 10 degrees below average, so much, much, cooler than average conditions."

Because of the cooler and drier conditions, Ms Bradbury said increased fire dangers would be present across the Kimberley and the north west of Western Australia towards the end of the week.

A mix of records were broken in Australia last week, with warmer-than-average temperatures in the first few days of spring.

In Mildura, Victoria, on Thursday the temperature hit 33 degrees - the earliest 33 day after the end of winter on record.

In terms of September records, Victor Harbour in South Australia got to 31.2 degrees, and Naracoorte hit 30.3 degrees.

Ms Bradbury said in most cases those records only went back about 10 years and were beaten by about 0.5 of a degree.

There were some warm nights around Melbourne on Thursday night, with the temperature at Moorabbin only dropping to 21.7 degrees on Thursday, breaking a 51 year record (20.1 degrees).

"Over the past couple of days, we have had some pretty decent rainfall totals, particularly across eastern Victoria and south eastern New South Wales, especially about those elevated parts," Ms Bradbury said.

"And that has triggered some minor to moderate flooding across large parts of eastern Victoria and also southern New South Wales.

"That's kind of going to be the focus for those days over the next couple of days now that that low pressure system and its front is moving offshore."

The good news for Queensland this week is that below average maximum temperatures are expected this week.

"So while that still means reasonably warm in the 20s or so it is technically below average," Ms Bradbury said.

"So it will be a bit milder, I guess you could say."

Ms Bradbury said big swells will be expected off the coast in the south east of Queensland this week.

Some shower activity will also be seen on the tropical north coast this week.

The story The week ahead in weather: National forecast first appeared on Farm Online.