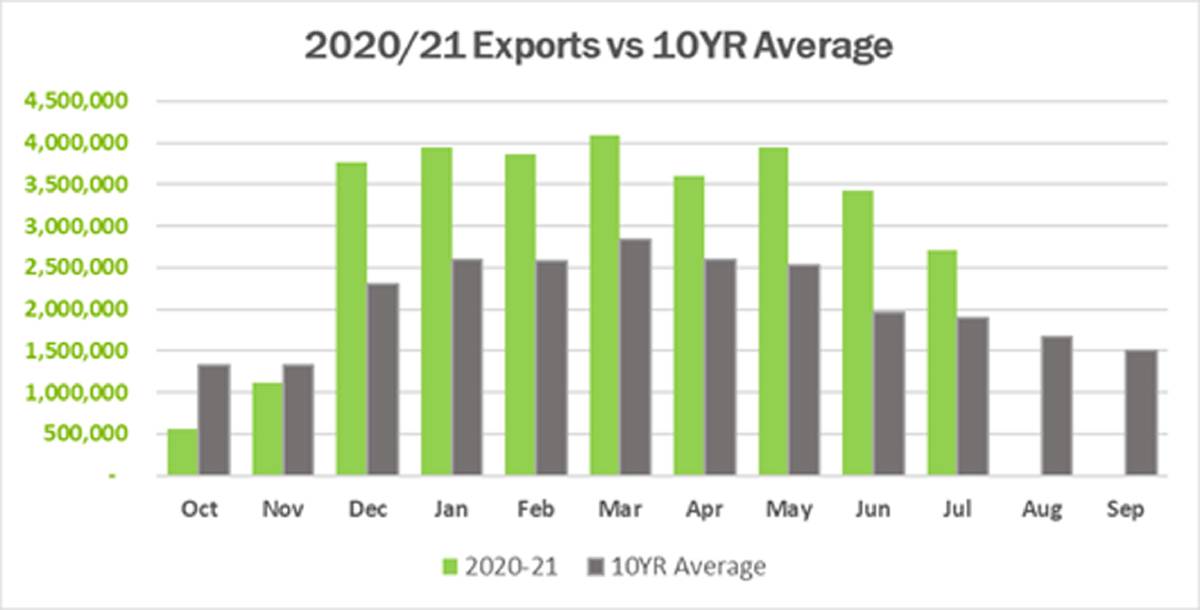 Australian grain is flying out the door into off-shore markets.

For most tonnes that found their way through our supply chains and onto a boat, a handsome margin was earned by the bulk handler/trader.

THE export task in 2021 has been nothing short of historic.

This is especially the case when you consider that 2021 was following a long and brutal drought.

This is relevant as most of the east coast port infrastructure had either been collecting dust for the past few years or reconfigured to accommodate imports given the feed deficit in New South Wales/Queensland.

Not only that, but investment into our supply chain was also negligible, as a multi-year drought tighten the belts industry wide, while trucking investment was low given the poor margins available for the past few years.

If we look at the chart opposite, we can see just how big our export program has been this year (looking at wheat, barley and canola).

The much bigger volumes obviously go hand-in-hand with a much bigger crop, as our exportable surplus of grains and oilseeds exploded in 2020/21, as the country harvested record crops.

These sorts of volumes though were only achieved with a special ingredient, one that is unfortunately rare in the Australian grain market, positive export margins.

For most tonnes that found their way through our supply chains and onto a boat, a handsome margin was earned by the bulk handler/trader.

These positive margins, which in some cases were as good as they've ever been, incentivised both existing infrastructures to be pushed to the brink, but also new investment into port loading capacity to capitalise on the opportunity at hand.

This new investment took many shapes, for example mobile ship loaders, which were primarily utilised in Victoria and South Australia allowing for greater monthly volumes than otherwise would have been achievable.

It wasn't all fun and games though, with margins on paper looking much healthier than they were in reality given the numerous execution risks this year such as demurrage, freight rates, COVID, container availability and others.

After it's all said and done, the 2020/21 season will go down as the biggest export year in terms of volumes since before 2000 when our data starts.

It has been a season that we desperately needed to breathe life into the industry at all levels.

As we step into the first couple of weeks of spring, we get a clearer sense of what the next 12 months might bring when it comes to export volumes and supply chain utilisation.

Assuming an average spring of weather, it's clear we have another year of pushing our export infrastructures to the limit, especially in WA if the weather plays ball.

Luckily, this year-round the supply chain is a well-oiled machine which will be much more accustomed to handling big volumes.

That's not to say there won't be breakdowns here and there, but the industry has proven, where there's a margin, there's a way.