With a long list of return buyers and a couple of new ones in the lanes, competition on the line-up was strong from beginning to end as buyers chased the proven Manunda genetics to a high of $7500 three times.

AS the temperatures rose across the Wheatbelt at the beginning of the week, so too did the prices at the Manunda on-property Poll Merino ram sale at Tammin on Monday with the sale average rising $455 on last year.

With a long list of return buyers and a couple of new ones in the lanes, competition on the line-up was strong from beginning to end as buyers chased the proven Manunda genetics to a high of $7500 three times.

When Nutrien Livestock auctioneer Michael Altus bowled over the 270th ram penned after just short of three hours of selling and the figures were tallied, it all pointed to another extremely strong sale result for the Button family.

All 270 rams offered were sold under the hammer to 40 different buyers for an average of $1881.

In comparison, in last year's sale when the wool market was back and the season was certainly nowhere what it is this year, the stud sold 268 rams from 280 offered for an average of $1426.

Nutrien Livestock Breeding representative Mitchell Crosby said it was a very strong sale for the Button family and certainly stronger than expected with a complete clearance achieved and the average up by more than $450.

"The final result was no doubt due to the great season being experienced in the Wheatbelt," Mr Crosby said.

"The sale started on a positive note with a line of ewe hoggets from clients Caffell & Son, Tammin, which is dispersing its flock, selling to $308 to the Eastern States.

"When we moved into the rams the first run was very strong on the back of stud interest and commercial breeders which run nucleus flocks and from there it was backed up by long term and new volume buyers.

"This year was the first year the stud offered the rams with Australian Sheep Breeding Values (ASBVs) and they were well received by clients."

When it came to the line-up of rams presented by the Button family, Mr Crosby said it was a fantastic line-up and a credit to the them.

"It was a very even team from beginning to end which all showed the traits Manunda is known for - good long, white, soft-handling medium wools on good bodies," Mr Crosby said.

"The family's large investments in genetics in recent years could certainly be seen in the team of rams offered."

The sale got off to a flying start with an offering of 19 March shorn, shed-prepared rams selling for an average of $4250 and it was in these pens that the three equal $7500 top-priced rams were found.

The first time the $7500 price was achieved was when Mr Altus stood over the opening lot - a deep-bodied, stylish-crimped ram and after some quick bidding it was Norm Beech, buying on behalf of his son Jarrad, Rothbury stud, Tenterden, who had the final bid.

Mr Beech said the ram had stylish rich wool on a balanced frame.

"Jarrad purchased a semen share in the $30,000 Manunda ram which sold at the recent Rabobank WA Sheep Expo & Ram Sale at Katanning and he will use this ram as a back-up to the AI program," Mr Beech said.

"He only started his Poll flock last year when he purchased some Poll ewes and joined them last year to Banavie 333 genetics."

The next ram to hit $7500, which was catalogued in lot 10, also had a number of interested parties operating on it until it was knocked down to Ben and Jackie Simkin, Lyndale stud, Binnu. 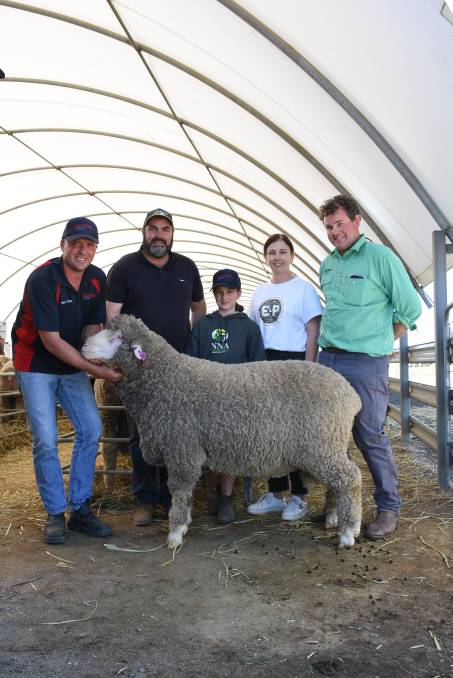 Mr Simkin said it was the ram's staple length and structure which caught his eye.

"He has a lovely long staple, beautiful make and shape and a very good head," Mr Simkin said.

"We had a ram from Manunda about 15 years ago and it suited us, so we look forward to seeing what this new bloodline will do for our flock."

The final ram to sell at $7500 was an upstanding, long-stapled, bright, white woolled Poll Boonoke Bobcat son offered in lot 14.

After some spirited bidding on the ram it was pencilled down to return buyers Paddy, Henry and Sam Hooper, CJ & AR Hooper, Merredin.

The next best price in the sale was $7250 and this was recorded twice again among the March shorn rams.

Return buyer of more than 10 years Neil Schorer, Schorer Nominees, West Pingelly, was the first to go to $7250 when he secured a heavy cutting Bobcat son in lot two.

Mr Schorer said the ram had a good constitution, style in its wool and a long staple.

"We will use him in our nucleus flock of 170 ewes to breed rams for our own use," Mr Schorer said.

The ram had a good set of ASBVs ranking in the top 5pc for YWT, YCFW and the MP+ index as well as top 10pc for YGFW and the DP+ index.

The second ram to sell at $7250 was penned in lot four and was purchased by return buyer Greg Barrett-Lennard, Belhus stud, Beverley.

Mr Barrett-Lennard said the ram would be a new bloodline for his stud and it was the ram's squareness, good free growing skin and staple length which he liked the most.

While these five buyers took home the top-priced rams there were a number of other buyers which weren't afraid to bid up strongly on their selections and the strongest of these was return buyer RS & JA Della Bosca, Bodallin, which secured a team of seven rams at an average of $3043 and to a top of $4000 paid for a 20.7 micron, 99.5pc CF March shorn ram.

Clients of more than 30 years, the Innes family, Innes & Co, Kellerberrin, were also in this category pushing prices along on many of the top rams.

"They are really productive wool sheep and cut a heap of wool," Mr Innes said.

Also bidding up strongly and averaging more than $2300 for larger sized teams (more than five) were E Giles & Co, Doodlakine, averaging $2350 for six, while RD & TJ Menzies, New Norcia, averaged $2388 over a team of eight.

While there were a number of buyers which purchased small teams at the top end of the market the result was set up by an extensive list of volume buyers.

The biggest of these was Nutrien Livestock, Merredin agent Aaron Caldwell, Livestock & Land, who purchased a team of 24 sires at an average of $905 and to a top of $1500 for a new undisclosed Southern Cross client.

Mr Caldwell also carried a volume order for an undisclosed return buyer from the Yilgarn area and for this client he secured 12 sires to a top of $2100 and an average of $1458.

There were another four buyers to secure double figure teams and repeat buyers KJ & RP Siegert, Wongan Hills, was the most influential of these, purchasing a team of 15 to a top of $2700 and an average of $1947, while return clients R & K Day, Burracoppin, averaged $1617 across a team of 12 that topped at $2200.

The other two buyers to purchase double figure teams were KL Tippet & Co, Shackleton, which averaged $2190 across a ute load of 10, while CB & CA Whitfield & Son, Wongan Hills, finished with 10 at an average of $1870.

(Under the hammer results)