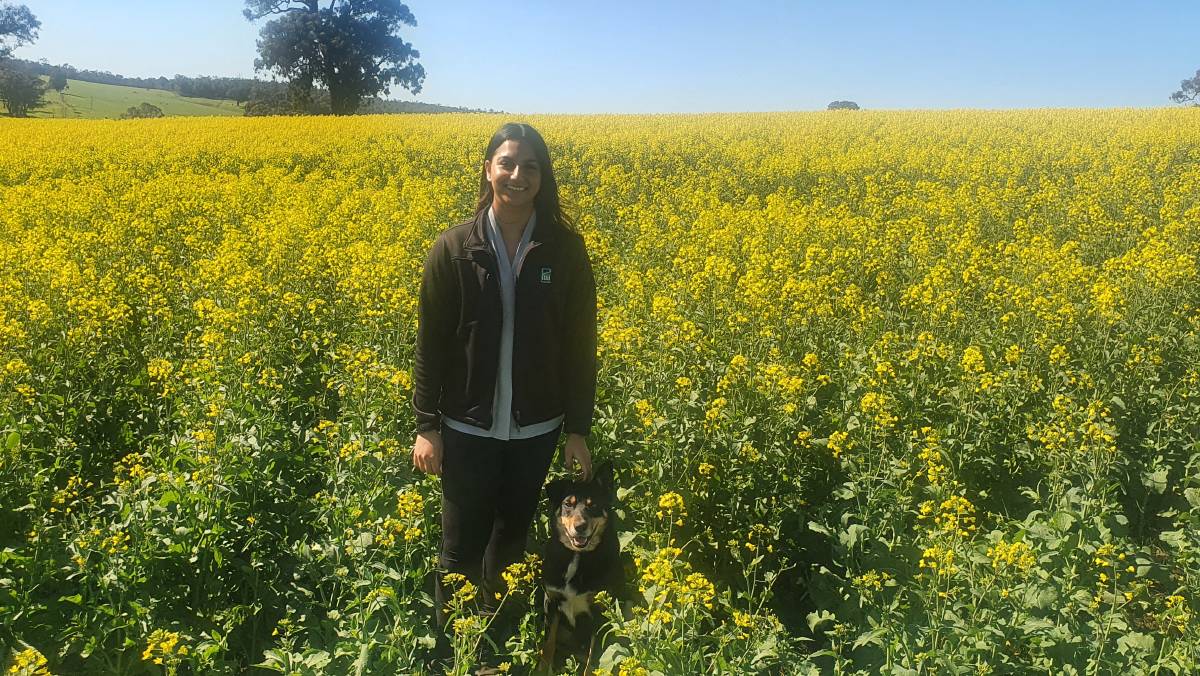 Sang Ravindran is a graduate farm consultant at Planfarm, Manjimup. She is with pup Mike, in a canola field next door to her partner's family farm at Manjimup.

SINCE following her heart to the country to be with her farmer partner and now fiance, city girl Sang Ravindran hasn't looked back.

Ms Ravindran, 25, said she never thought she would live in the country, but after meeting her partner Jake Ryan, when they were both studying their agribusiness degrees at Curtin University, she decided to take the opportunity to move to Manjimup and live on Mr Ryan's family farm.

The 200 hectare property is a mixed horticulture, livestock and cropping enterprise and is one of the biggest cabbage producers in the State, holding the Australian record for the biggest red and green cabbage grown.

As well as producing cauliflower, broccoli and kale, the farm runs sheep and cows and has laying hens.

Ms Ravindran acts as a casual helper on the farm every second weekend, contributing to the family's laying hens business, which is owned by Mr Ryan and his sister.

With no jobs lined up when she first moved to Manjimup, Ms Ravindran worked at the Bendotti chip factory as a lab technician where she was in charge of quality control of the potato chips.

"I had to do a quality check on lab equipment, water and the chips - so I basically ate hot chips for the job which was pretty cool," Ms Ravindran said.

However a few months later, she successfully applied for a role at Planfarm as a graduate farm consultant.

Born in Malaysia, Ms Ravindran's family moved to Australia when she was just five-years-old.

With her dad a finance broker and her mum a nurse, Ms Ravindran had no farming background or experience in agriculture prior to undertaking her bachelor of agribusiness in 2014.

However an industry placement scholarship she won in year 12, through the national Primary Industry Centre for Science Education (PICSE) and partly sponsored by Curtin University, piqued her interest in the industry by exposing her to the multiple opportunities in the sector.

"I won the PICSE scholarship and although I applied through my biology class, it was actually geared more towards the agricultural industry," Ms Ravindran said.

"Through that scholarship I visited CBH, the Department of Primary Industries and Regional Development (DPRID), various labs and the Muresk Institute and heard from professionals in the industry.

"I also did some work experience in the lab at CBH's metro grain centre which was super interesting, as I was already thinking of doing biological sciences at university and wanted to work in a lab."

While studying for her degree, Ms Ravindran worked as a harvest casual at CBH in her summer holidays and as a casual research officer at DPIRD, where she formed part of a frost research trials team that investigated the impact of frost on grain weight in both barley and wheat varieties.

"Length and weights of the subsamples collected from the field were taken and the samples were then grain mapped," Ms Ravindran said.

"Other duties include field work when harvesting the trials, threshing, head counts, grain mapping and vernalisation of next season's seed."

However Ms Ravindran's university studies were interrupted when she had to have surgery to correct her scoliosis in December 2016, which resulted in her studying the last year of her degree part time.

"As it was major spinal surgery, I was obviously out of action for a while and it took me about six months to fully regain my strength," Ms Ravindran said.

Reflecting on the impact of enduring the health condition growing up, Ms Ravindran said the whole experience had made her a stronger person.

"I had to wear a break brace in high school for about two years, which was quite hard as I was in it for about 22 hours a day, except for showering and sports," Ms Ravindran said.

"It was an awkward hard bit of plastic that started under my armpits and went down to my waist so I kind of felt like a robot.

"Then I was told it hadn't really worked and I had to have surgery to correct it - so that was a hard pill to swallow."

In order to save herself a lot of pain in the future, Ms Ravindran decided to put herself on the waiting list to have spinal surgery while she was young and fit and as a result of the surgery she is now able to live a normal life and has no expected health complications for the future.

As a graduate farm consultant at Planfarm, Ms Ravindran does preparation work for Planfarm's client files, which are then analysed by the team to help identify key areas for improvement and profitability.

In the role Ms Ravindran also sets up budgets for Planfarm clients for the upcoming year to ensure optimum performance.

"Our busy time is straight after harvest where we sit down with clients, analyse the year that has just been and make a plan going forward," Ms Ravindran said.

"We then do a budget update halfway through the year and farm visits to check on the progress and ensure everything is going to plan."

She is also involved in putting together Planfarm's industry recognised annual report, which combines and analyses all of the company's client's datasets.

With Planfarm recently having a revamp in terms of its logo, website, newsletters and app, Ms Ravindran is on an internal committee focussed on the promotion of the services offered by the company, particularly through social media.

Ms Ravindran said while she appreciated the analytic aspect of her role, she particularly enjoyed getting out and about in the industry and hearing from growers about what they were doing on their farms.

The regenerative agriculture space has also sparked her interest, after being introduced to the concept by her partner who uses some of the sustainability practices on his family's farm.

"It's becoming more talked about in the broadacre space and I've written a few articles in our Planfarm Landlines (newsletters) which have piqued a few people's interest and helped get the conversation started," Ms Ravindran said.

Looking forward, Ms Ravindran hopes to build on her knowledge and experience at Planfarm so she can have her own portfolio of clients in the next year or so.

"Once COVID calms down and we can travel again, I would also love to visit farmers in the United States and South America," Ms Ravindran said.