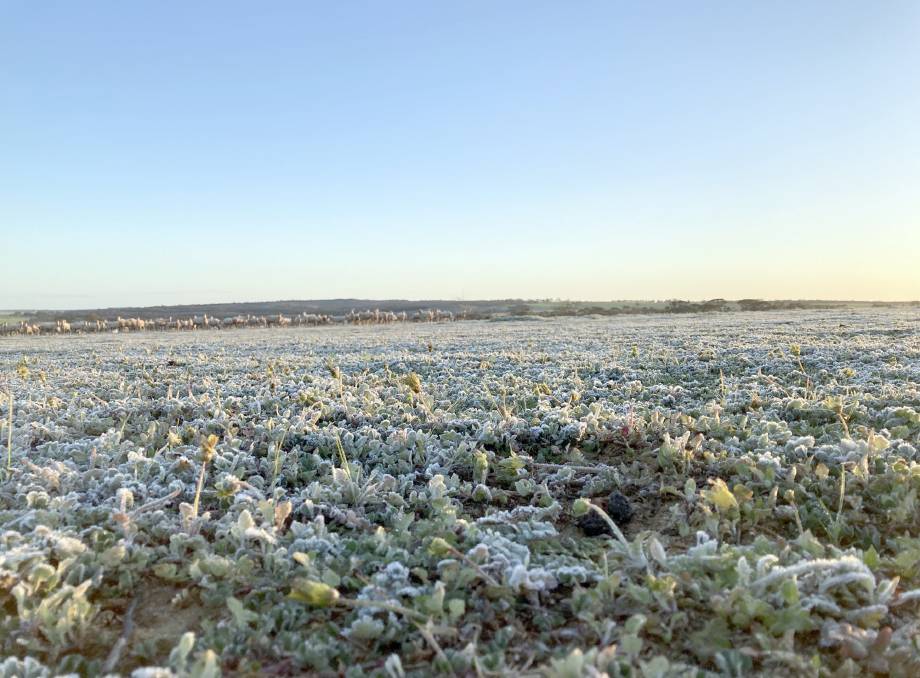 Corrigin farmer Simon Wallwork said it got to about -0.5, which actually isn't too severe for them, but there was still a bit of frost in some valleys and susceptible areas.

CHILLY mornings over three days created conditions ideal for 'Jack' to swoop in and take his bit from WA growers, with those in the eastern Wheatbelt worst hit by the frost event.

Farmers within a 50 to 100 kilometre radius of Westonia would have felt the brunt of the frost effect, but the impact of the cold temperatures stretched for hundreds of kilometres both north and south.

Independent agronomist Michael Lamond said there was no denying that the damage would likely be significant in the worst hit areas in the eastern lower rainfall zone.

"Many farmers had three days of below -1, which is going to have a big impact and those that got to -3 or lower are really going to feel it," Mr Lamond said.

"What's most devastating is that the event was way worse than we expected and before that we were looking at a well above average harvest, so we've gone from looking at something beyond all expectations, to knowing it won't be quite as high.

"The estimate for harvest in August was just over 20 million tonnes, which was conservative considering the condition of the crop and it had been made factoring in some frost events, however that estimate is definitely going to be reduced." 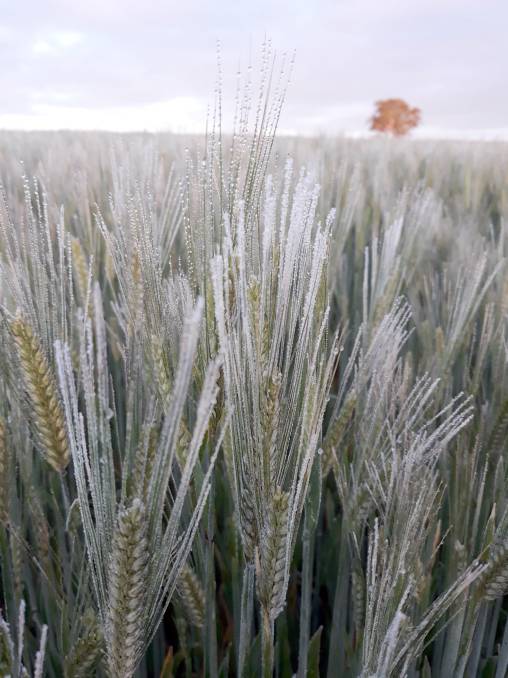 Temperatures dropped as low as -5.1 degrees early last Friday morning, with the majority of growers in the eastern Wheatbelt being hit by frost. Photo by Phil Veitch, Balkuling, Twitter.

Bencubbin farmer Tony Sachse was worst hit on Friday morning when it got down to -3.5o at the bottom of the valley on the farm, with Saturday morning not much better and the frost lingering on Sunday morning as well.

He said the most worrying thing was that it was below zero for eight hours on Thursday night and Friday morning, which is a really long time for it to be that cold.

"It's too early to say what the impact will be as it normally takes about 10 days for it to show up, but there is warmer weather forecasted for this week, so that will probably bring the effect out a bit earlier," Mr Sachse said.

"There will be significant damage and there are so many factors at play - it's hard to determine how some of the canola and lupin crops in particular will be affected, but some of the cereals that were stem elongated will be at a higher risk.

"Up to this point it had been a fantastic year and a lot of inputs had gone into the crops, so it is really disappointing to have had such wonderful potential and then have some of that taken away." 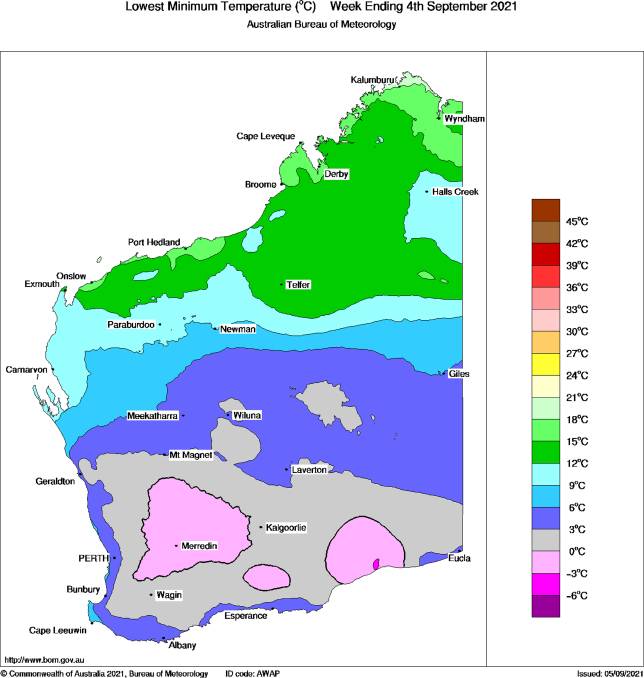 Graingrowers whose crops were exposed to the recent cold temperatures are being reminded to check for signs of frost damage.

Department of Primary Industries and Regional Development (DPIRD) research scientist Ben Biddulph said the early season break and mild winter had brought forward crop development, so crops in susceptible parts of the landscape in areas that typically experience frost may have been damaged.

"It is important for growers in affected areas to get into their crops and inspect plants for frost damage on heads, stems, flowers and developing grains over the coming weeks," Dr Biddulph said.

"Wheat and barley crops are most susceptible to frost after head emergence, although cereal crops can also be at risk during the early booting and grain filling stages, while canola and pulses are most at risk during pod formation and seed fill."

While the full impact of the frost event won't be known until the weekend, or even next week, Mr Lamond said there were a few positives that could still be taken away - mainly that there is still good subsoil moisture around.

"If it was later in September and there was a drier profile, the impact would be a lot more severe, but a lot of the subsoil moisture that is there will be available to produce secondary growth and some grain," he said.

"On top of that, while we may have some warmer days coming up, we're not going straight from frost to really hot weather, which is good news."

Corrigin farmer Simon Wallwork was also choosing to look at the positives, counting his blessings that the temperature didn't dip quite as low in his area.

"It got to about -0.5, which actually isn't too severe for us, however there was still a bit of frost in some valleys and susceptible areas," Mr Wallwork said.

"That's par for the course for us, Corrigin is frost central and we allow for it every year - I'm not sure what percentage we will have lost at this stage, but there will be some.

"However, because the soil is still wet and the crops are still pretty green, there is an ability for the crops to compensate."

Growers have been advised to wait until the full extent of frost damage is apparent before making crop management decisions.

Dr Biddulph encouraged growers to assess paddocks with their consultants over coming weeks and to discuss management options.

"A few warm days often make the frost damage much more apparent and easier to see," he said.

"It is important to wait until all forecast frosts have occurred and then determine if crops are damaged by frost or not.

"Once the situation is clarified, informed decisions can be made about how best to manage that crop going forward."

When it comes to forecasted frost, the Bureau of Meteorology has forecasted that it is unlikely to be cold temperatures again until the weekend, but even then it doesn't look like they'll be heading back into the negatives.

"In saying that, we're not out of the colder part of spring just yet, so we can't rule it out entirely," forecaster Steve Mcinerney said.

"Over the next couple of weeks, we're looking at an average chance of getting colder than normal temperatures.

"It doesn't look like there is anything that's showing really cold air coming up like there was last week, so at least until the middle of next week it's looking like fairly typical weather for this time of year."

While the frost event from September 3-5 was the most widespread of the season, it was not the first to hit some growers in the southern areas. Towards the end of August, Salmon Gums farmer Tim Starcevich copped three days in a row of frost with -3 degrees, -2.7 and -2.5. From that event, the top three or four inches of his canola crop has gone as it's turned all of the flowers white and caused them to fall off.

Towards the end of August, Salmon Gums farmer Tim Starcevich copped three days in a row of frost with -3, -2.7 and -2.5.

He was then hit again with the event that hit most of the Wheatbelt recently, with it getting down to -2.2.

"From the original frost event at the end of August, the top three or four inches of canola has gone as it's turned all of the flowers white and caused them to fall off," Mr Starcevich said.

"The barley is really hit and miss, anything that was still in the boot is alright, but there are heads gone, so it's taken bits and pieces everywhere.

"In the more recent event, there was ice around on the Friday, Saturday and Sunday, but I'm hoping the impact won't be as severe because it wasn't as cold for as long."

DPIRD has a one-stop-shop of information, advice, tools and maps available on its season 2021 webpages to support growers to identify and manage frosted crops.