The cold blustery conditions failed to dampen the spirits of buyers in attendance with one of the best widespread seasons seen in some time and buoyant sheep and lamb values giving everyone plenty to smile about.

But with the buying register missing the trading names of a few regulars at the sale, who unfortunately have left the sheep industry, clearance could have been an issue, but a few new buyers and return buyers prepared to stock up on numbers helped fill the void and ensured all rams found a new home at auction.

Warmed up from the Davies family's generous hospitality, buyers bid actively on selected lots through to the final pen and at the completion of selling, the Elders selling team led by auctioneers Nathan King and Steele Hathway had recorded a complete clearance of the sale team for an overall average of $1538.

Clearance improved from last year's sale where 103 of 120 rams (86 per cent) sold at auction, however some absent competition, particularly on the line-up of Poll Merinos, saw the combined average dip by a minimal $91 from last year to $1538.

With values ranging from $4000 to $800, buyers of all budgets were catered for to fill their requirements.

It was the Davies family's third on-property ram sale since transitioning to an onfarm sale in 2019 following 29 years of selling rams at the Wyalkatchem Merino Breeders ram sale and Cardiff stud classer Kevin Broad, Elders stud stock, said it was a pleasing result given the reduced buyer numbers.

"A total clearance with 23 registered buyers was an excellent result with a lot of volume buyers and some new clients from the eastern Wheatbelt."

A line of seven April-blade shorn rams got the sale underway on a strong note which included the sale's $4000 top-priced ram penned in lot three which was knocked down to return nucleus buyers of six years Wayne and Glenn Smith, Wongamine Grazing, Northam.

The Smiths also purchased another Gov son catalogued as sale team leader for $2500.

Glenn Smith said they first saw the Cardiff rams at the Narrogin Long Wool Day and again at the Dowerin GWN7 Machinery Field Days and said they were big upstanding rams with very good quality, white and bright wools.

The rams will join the 600-700 nucleus ewes in late December to produce replacements and their own flock rams for their 4000 head total ewe mating.

Long-time buyer of more than 20 years the Cosgrove family, Roylans Farming, Shackleton, was prepared to operate at the top of the market on the way to building a team of 14 Merino and Poll Merino rams. 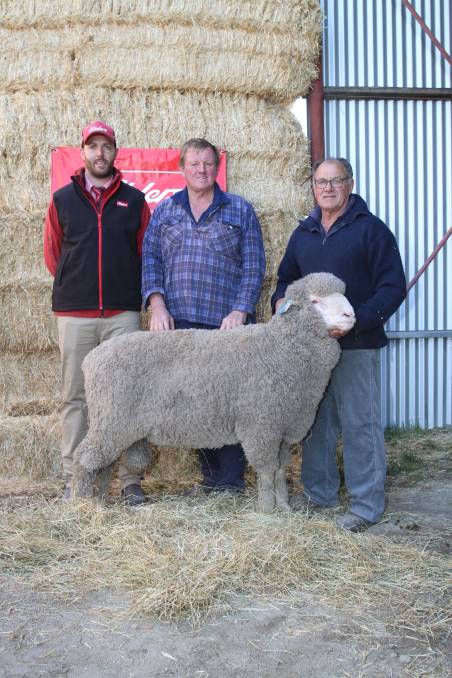 The Cosgroves also paid to the sale's $2200 top price for their four Poll Merinos with the top bid going to the team leader.

Trevor Cosgrove said they have slightly increased their mating numbers of the late August shorn sheep operation to 1900 ewes this year with the rams set to go in early November.

"I saw the Poll ram at Dowerin and was surprised to get him at that price," Mr Cosgrove said.

"We managed to buy 14 new rams to replenish the stocks, the season is magnificent and we sold cast for age ewes for $200, so they don't owe you anything."

Other buyers to pay $3000 and beyond for their selections included Andrew Smith, Richard Smith & Sons, Goomalling, who tallied seven Merino rams costing to a $3300 top price reserved for a 112kg Banavie sired ram in lot 18 displaying tests of 19.6 micron, 3.8 SD and 98.7pc CF and 6.1kg GFW.

Armed with a significant order from annual volume buyer Barry Large, Moorara Farms, Miling, who was unable to attend in person, Mr Broad was kept busy to finish the sale with 16 rams for this account costing from $800 to $1500.