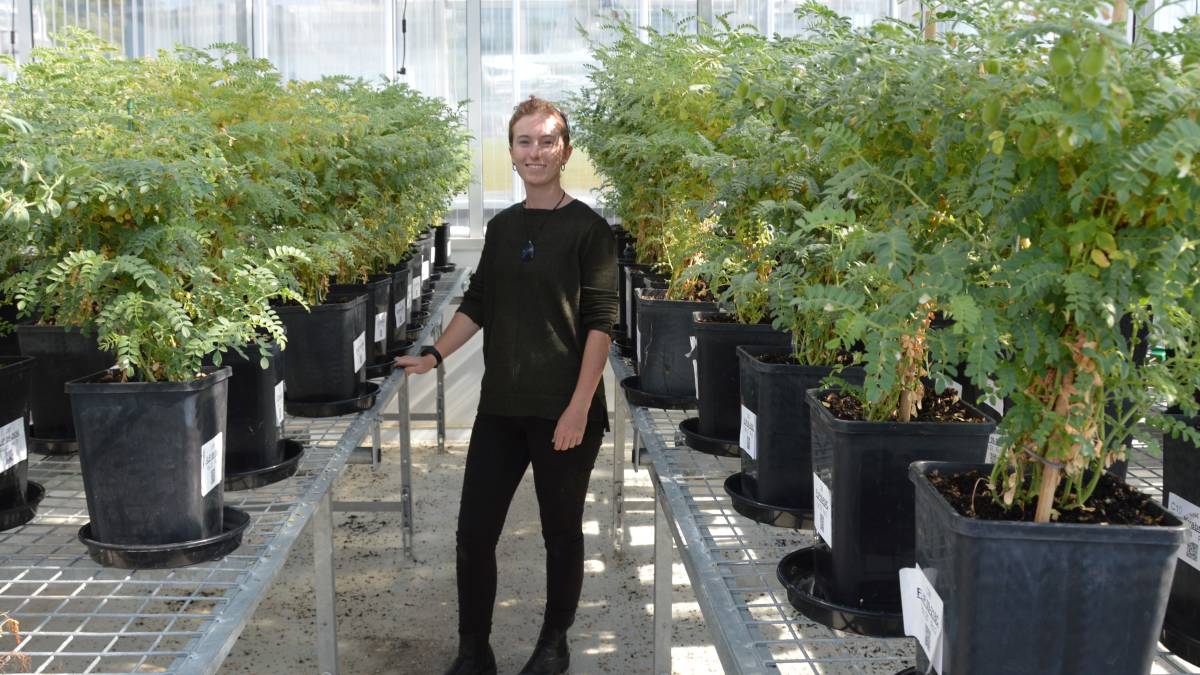 PhD student Cara Jeffrey has been selected as one of four Australian nominees selected out of 100 delegates aged 18 to 25 from around the world to attend the biennial 2021 Bayer Youth Ag Summit in November.

A former marine biology student has pivoted to now be involved in large-scale chickpea trials.

Now that research has earned her selection as one of four Australian nominees selected out of 100 delegates aged 18 to 25 from around the world to attend the biennial 2021 Bayer Youth Ag Summit in November.

Ms Jeffrey originally studied marine biology before going on to complete her honours at James Cook University, where she worked with the pearl farming industry to develop a method to extract pearl oysters' tissue in a way that didn't harm them for genetic analysis and selective breeding.

Needing a change in direction, she began to consider a career in agriculture and started a PhD which involves research to identify the breeds and sections of DNA from chickpeas that breeders should target to produce a more heat tolerant and resilient crop.

That research involved two large-scale chickpeas trials - one in Kununurra and the other in Narrabri, New South Wales - in which she was looking at certain traits, taking measurements on different breeds and genotypes and looking at how they grow in different environments.

"We have an environment in Kununurra which is hot but there is the ability to give the plant enough water and nutrients to grow as big and healthy as they possibly could, so there was no environmental impact in their growth," Ms Jeffrey said.

"Whereas in Narrabri we had more typical Australian growth conditions for chickpeas, the crops are only watered by the rain and have no external nutrients.

"The idea was to compare how the crops grew in those different environments and whether we could find any seriously impressive performers in terms of growth under heat stress."

In both Kununurra and Narrabri the crops were maturing in summer, with the trial investigating if there was a yield difference, what the trends were among the species and if any of them stood out as being very reliable.

The ultimate aim was to find something that could tolerate a lot of heat and not have any detriment to the farmer, meaning it still gave the same number of seeds and high tonnages so farmers could rely on them for future growing years.

Ms Jeffrey said that while chickpeas were grown in the Ord region in WA, there was not a lot of research on the agronomy of growing them under heat stress and not much was known about how much heat they're tolerant to.

"A lot of breeding in the past has been done for things like disease and drought tolerance, but if we can get a crop that is very resilient to heat and very reliable, it increases the breeding effort and adds the next puzzle piece," she said.

"That means we can release more specific cultivars for farmers that want to grow up north, later in the season when it's a bit warmer or make sure that if we have specific years when conditions are hotter and drier, that we can market to those farmers and those needs."

Underlying Ms Jeffrey's research is a passion for sustainable food production, particularly improving sustainability and reliability through genetic methods, with her PhD mainly based around genetic mapping to improve breeding efforts for the future.

Her research forms a sort of pilot study, where they would give the results to breeders who would take it from there to start producing cultivars.

"For me personally, this project really stood out to me because chickpeas are such a crucial crop in many countries," Ms Jeffrey said.

"It's such a big export for Australia and it's something that people in countries such as India and Pakistan have as a staple in their diet.

"For places that don't have a whole lot of food security it would be really great to be able to offer cultivars that have the ability to grow with more stability in such a rapidly changing climate."

Considering her background was not in agriculture, Ms Jeffrey was both shocked and honoured when she was selected as one of the four Australian representatives for the Bayer Youth Ag Summit

This year's delegates were selected from 2000 applicants representing nearly 100 countries, with the summit bringing together a community of young global leaders who are championing sustainable agriculture and food security, as well as working to bridge the understanding gap between those who produce and consume food.

Ms Jeffrey said it was phenomenal to see the projects the other delegates were working on and the vast differences in what everyone is doing.

"There's some aquaculture and hydroponic researchers, as well the more traditional cropping stuff," she said.

"It's a great way to get everyone together to look at this from lots of different perspectives, but all with the same goal of sustainable food production and safeguarding key crops and elements of food for future generations.

"It's nice to see that there is space for my generation to be given a voice and an opportunity to have their ideas heard so that we can maybe figure out what we're going to do moving forward - in 20 years, we're going to need to have a voice and this is where that starts."