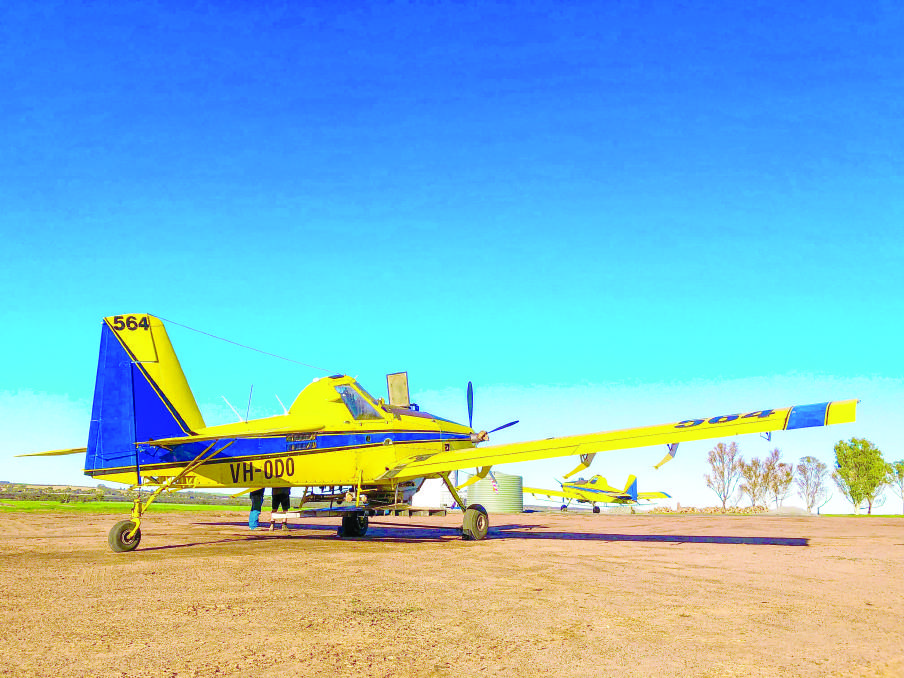 Aerial services have been in hot demand this year with farmers using them to bait for mice when they have been unable to get onto wet paddocks. Photos by Reagan Kau, Sierra Turipa Aviation.

Reports of higher than normal levels of mouse activity have been coming in over the past two months.

PLANES across Western Australia's graingrowing regions have taken to the skies far more than usual, with farmers using them in an attempt to get the growing mouse plague under control via aerial baiting.

Reports of higher than normal levels of mouse activity have been coming in over the past two months, initially from the Geraldton area, however as the season has progressed more and more cases have been noted from further south, including down into the Great Southern.

Woodanilling farmer Tom Patterson said this was the first time he had ever had an issue with mice on his farm and after putting chew cards out, he made the decision to do a small amount of aerial baiting as a trial.

"Midway through August we got Freeman Aerial Services from Wagin in and after the aerial baiting there are less holes in the cards, so it must have worked at least a little," Mr Patterson said.

"It's not something we've ever seen before and I honestly don't know much about it, so we have potentially had some damage but it wasn't conclusive

"We've learnt a bit this year, especially from the farmers up in the northern ag region, so it's something we're more aware of now and we will be keeping an eye on it."

While it's difficult to say exactly what caused the outbreak in WA, it is common on the east coast for populations to increase when a good year immediately follows a few dry ones.

GRDC-supported CSIRO mouse researcher Steve Henry said numbers in northern New South Wales and southern Queensland this year kicked off on the back of great conditions after four or five really dry years.

"That could have been a similar scenario over in the west, but ultimately it's a combination of food and favourable climatic conditions that leads to an outbreak, however it doesn't necessarily lead to an outbreak every time you get a good season," Mr Henry said.

"The other issue in WA this year is that the ground is so wet because of all the rain, so getting access to the crops via vehicle has been problematic, which means the air option does make a lot of sense.

"As long as it's going out at the correct rate of one kilogram per hectare and they're confident about the distribution, aerial baiting should be just as effective as the standard baiting methods."

Ensuring those correct rates was an initial concern for Sierra Turipa Aviation owner and pilot Reagan Kau as he had never been contracted to do aerial baiting before.

It has been a busy two months for the Coorow farmer and business owner, with time spent monitoring his own crops for any potential damage - of which there has been very little - and carrying out jobs from Mingenew to Watheroo, including in throughout Carnamah, Three Springs, Perenjori and Morawa.

"In 2002 I went to Mullewa to help do some, but I have never aerial baited in any form in this area before," Mr Kau said.

"When we first started we weren't sure how effective it would be and how to make sure we got that 1kg/ha rate right, but from every follow-up phone call I've had with my regular clients, it has been extremely effective.

"They have found dead mice and have had no more significant damage occur, which is as good as it gets, and luckily as a farmer I've had very minimal damage personally."

The damage from the mice has been sporadic with no systematic way that the pattern seems to be moving.

While some farmers' whole program has needed to be baited from the sky, their neighbours have often noted little impact.

For Carnamah farmer Scott Walton, mice are not a new problem and he did aerial bait a couple of paddocks a few years ago, however this is the first time the infestation has been so extensive.

He said he initially noticed some damage in the canola and while it was nothing too significant, the vermin were definitely starting to have an impact with pods on the ground that had been stripped.

"We put out chew cards everywhere and while there was no visible damage in the cereals yet, the numbers were there, so we teamed up with a couple of neighbours and decided that we didn't want to risk it," Mr Walton said.

"We've got some very reasonable crops, so while it was a pretty expensive exercise, I would have hated to see significant damage and if we don't control them now, we knew it would be worse over the summer and for seeding next year.

"We acted as soon as we started to see damage and from what we can see, the damage has significantly decreased in the canola, so hopefully any yield losses at the end of the season will be pretty insignificant."

With calls for aerial baiting services having died down as growers turn their heads towards harvest, they are being reminded that because it is such a good crop, extra care needs to be taken to harvest as cleanly as possible.

"The more food growers put into the system now as a result of header losses will sustain mouse populations through the summer and into the following autumn, which means they will be there when they're sowing the crop next year," Mr Henry said.

"It doesn't take a lot of food in the system to feed a lot of mice - they only need three grams per day which is equal to 66 individual grains, so if a grower ends up with 150kg of grain in the paddock after the header has gone through, that equates to 50,000 mouse days."