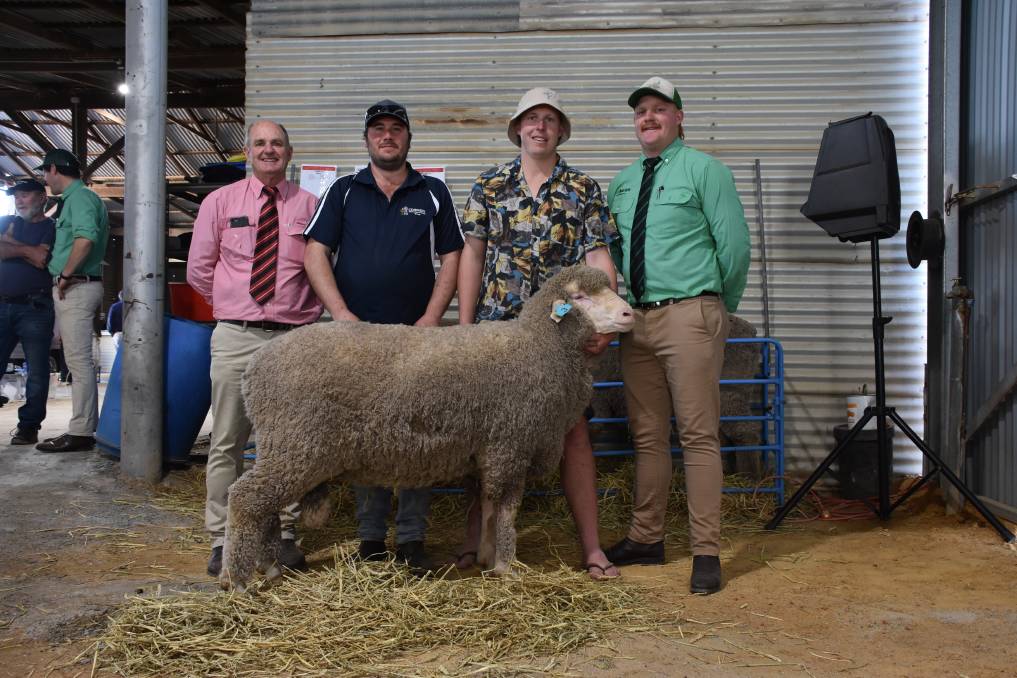 From start to finish the buyers were full of confidence in their bidding on 172 rams offered and this meant all Nutrien Livestock auctioneer Michael Altus had to do was add up the bids.

THE combination of a quality line-up of rams, better than average season conditions and positive market signals for the sheep, wool and grain industries ensured there was plenty of confidence among buyers at the Mackin family's Kamballie Merino and Poll Merino ram sale at Tammin last week.

On the back of this confidence, buyers pushed prices to a sale high of $11,500 and in the process also set a record average of $2264 for the sale.

In its 74th year of breeding Merinos, the Mackin family again presented another top catalogue of well-grown, white wool Wheatbelt Poll Merino and Merino rams, to a long list of return buyers and some new faces, who weren't afraid to bid up strongly on the rams they wanted.

From start to finish the buyers were full of confidence in their bidding on 172 rams offered and this meant all Nutrien Livestock auctioneer Michael Altus had to do was add up the bids.

As a result all 172 rams were headed to 33 new homes and the important sale indicators - average and gross - were well up on last year, to 'blow' the Mackin family away.

When the final ram was knocked down by the joint Nutrien Livestock and Elders selling team, the 172 rams offered had been sold for an average of $2264 and a gross of $389,350.

Mr Crosby said it was a fantastic outcome for the Mackin family that is continually reinvesting in its breeding program.

"The line-up of rams presented extremely well from start to finish and the offering was certainly appreciated by the buyers," Mr Crosby said.

"The results show what the Mackin family is doing in terms of spending money in genetics is working and is being appreciated and recognised by their clients."

Mr Wood said the sale was once again well-supported by a long list of return buyers, who know the performance of the Kamballie bloodline, plus a couple of new buyers.

"The final result was certainly up on expectations and a just reward for the time and effort the Mackin family put into their breeding program."

The sale kicked off with an offering of 15 March shorn rams, eight April shorn rams and one August shorn ram in the first run, getting proceedings off to a flying start averaging $4135 and it was this run, three pens in, the day's top price ram was found.

When Mr Altus stood over the upstanding ram in pen three and took an opening bid of $5000, the buyers clicked into gear and pushed prices quickly passed the five-figure mark in the blink of an eye.

The ram was one of the first sons of Poll Boonoke Bobcat (180137), which was purchased in 2019 for $70,000 by the Mackin family in partnership with the Manunda stud, Tammin, to be offered by the Kamballie stud.

Buyer Callum Nicholls said the ram impressed on all fronts.

"We were also chasing the Bobcat bloodline as it will be a new one for our flock.

"We will use him over about 80 ewes in our nucleus flock."

Along with securing the top-priced ram, the Nicholls family also purchased a second poll at $4500 which had a greasy fleece weight (GFW) at shearing of 9.3kg.

The Nicholls family run a nucleus flock of 300 ewes to breed rams for their own use and will this year join 2200 ewes in the main flock all to Poll Merino rams.

Mr Nicholls said they liked the Kamballie bloodline because they were fast growing and had excellent wool quality.

"The Mackins also provide excellent customer service and we have never been disappointed in a ram we have purchased from the stud," Mr Nicholls said. 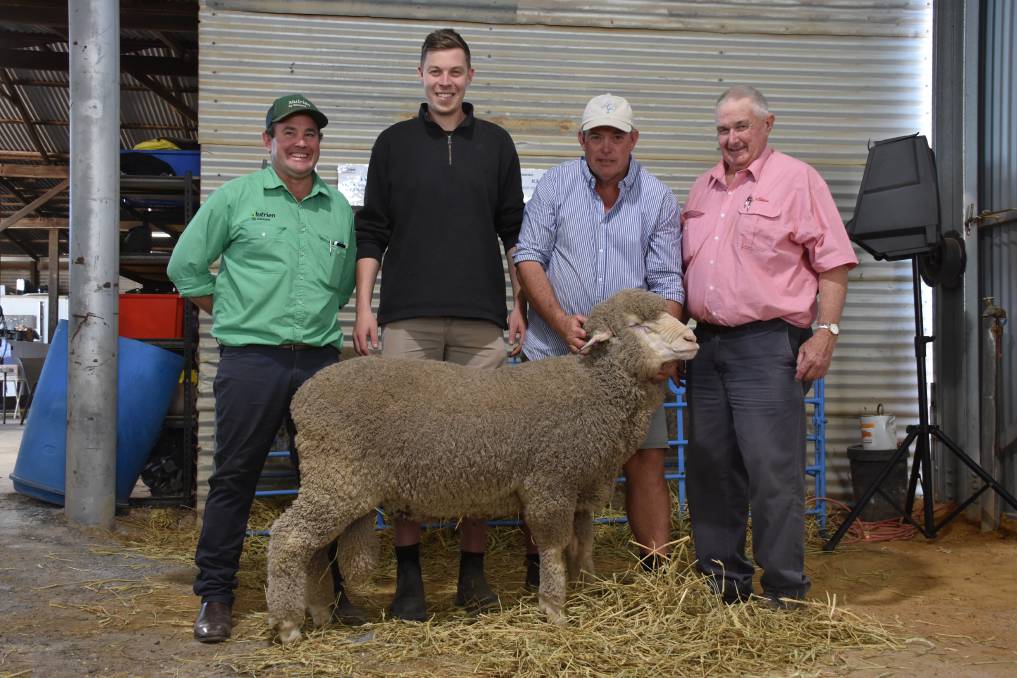 he second top price at last week's Kamballie on-property Merino and Poll Merino ram sale at Tammin was $9250 for this ram when it was knocked down to the Darijon stud, Narrogin. With the ram were Nutrien Livestock Breeding representative Mitchell Crosby (left), who purchased the ram for Darijon, Kamballie's Simon and Shayne Mackin and Elders district wool manager Russell Wood.

This year the Nicholls family recorded a 100pc lambing across all ewes joined of which two-thirds dropped in April and the remainder in July.

Mr Nicholls said their flock averages 20 microns and they aimed to turn off their lambs in March/April to process at about 53kg liveweight.

"The early lambs are weaned in July and the later lambs in October and they are then all shorn in December before they are backgrounded on stubbles," he said.

"We then finish them for sale in a feedlot."

The second top price for the day was $9250 and it was bid by Mr Crosby for a deep Poll ram with a great outlook in lot 20.

When it was knocked down to Mr Crosby he announced the April shorn ram would be heading to the Chadwick family's Darijon stud at Narrogin.

The 113kg ram is sired by Kamballie Rookie, which was sold by the stud in 2018 at the Australian Sheep & Wool Show, Bendigo, Victoria, for $25,000 to the Stud Park South stud, Willaura, Victoria.

Mr Crosby said Darijon had used the ram's sire Kamballie Rookie in an ET-program and it had worked well so they were keen to get some more of the bloodline into the stud.

"He is a ram with a great structure and a lustrous, white wool," Mr Crosby said.

Also during the sale he secured another April shorn Poll sire which was by Kamballie Rookie at $2750 for the Darijon stud.

The Last family, Aylesbury stud, Merredin, also had an influence at the top end of the market, securing the sale's $8500 third top-priced ram when they were the last bidder standing on lot four.

Mr Crosby also carried a buying order for the Polkinghorne family, Banavie stud, Marnoo, Victoria and he executed it on a Bobcat son in lot 21, buying it at $5250.

He said the Polkinghornes had seen pictures of the ram and were impressed by its white wool, soft muzzle and great body.

"They were chasing Bobcat bloodline specifically as it will be a new one for their stud," Mr Crosby said.

The top price for a Merino sire in the sale was $4500 and it was paid for the first Merino ram offered by GC & LR Jefferys & Sons, Merredin.

Along with securing the top-priced Merino ram the Merredin operation also purchased a second Merino sire, which was by White River 49 and had April wool tests of 19.7 micron, 3.3 SD and 99.7pc CF for $2000.

While strong buying support from studs underpinned most of the sale's top prices, it was the support of commercial buyers who weren't afraid to bid up which really underpinned the record breaking sale result

Among these were Bacon Hill, Westonia, which averaged $3367 across a team of three Polls that topped at $4250, while DE & MR Greenham, Koorda, secured four Polls at a $2625 average.

The Saunders family, Mulberry Nominees, Kellerberrin and the Faulkner family, Faulkner Brother Holdings, Beacon, which have both been buying from the stud for 10 years, also had significant influence on the final sale.

There were also a number of volume buyers in the sale and the biggest of these were Trevor and Jim Ryan, Dremdarkin Farms, Tammin, who have been buying from the stud since the mid 1980s when Shayne Mackin took over.

Jim Ryan said they continued to return and buy from Kamballie because they were spoiled for choice and because the rams were raised in a similar climate and topography to where they farmed.

"They have good doing-ability and it is always a good even line-up from start to finish," Mr Ryan said.

The Ryans clip averages 18 to 19 micron across everything and they usually achieve an overall wool cut of about 6kg.

There were another two buyers to collect double figure teams, both having 11 rams clerked to their bidding numbers.

Return buyers of 15 years the Ryan family, VG & EB Ryan, Doodlakine, which likes buying at Kamballie because the offering is always very even, purchased seven Polls at an average of $1357 and four Merinos for a $1925 average.

The other buyer was returning Cunderdin client AL Carter & Co, going home with a ute load of 11 Merinos averaging $1264.