"I was really impressed with the quality of the wools & bodies of the rams & the depth of the catalogue gave buyers plenty of selection." 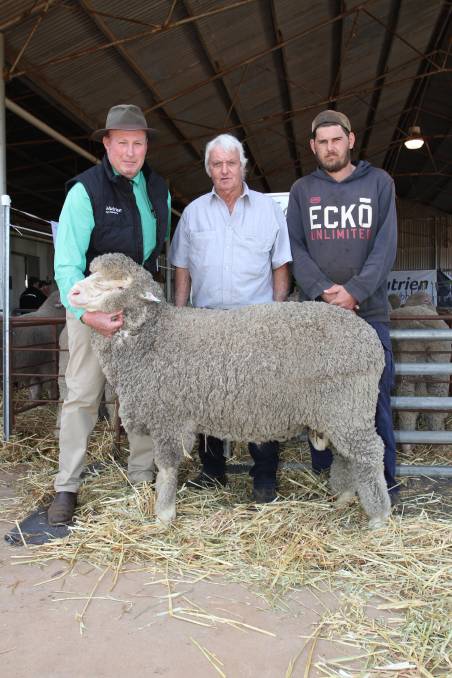 A number of buyers missing from last year's sale, due to challenging seasonal conditions, returned this year to join the studs' loyal band of long-time followers and a couple of fresh faces at the sale.

Commercial buyers competed strongly on their selections through to the final lot, reflecting the depth in the line-up of Poll Merino rams and current confidence in the sheep industry on the back of widespread favourable seasonal conditions and very strong sheep and lamb markets.

This strengthened demand drove all sale indicators northward to deliver the Edmonds family's a pleasing result.

At the completion of selling, the Nutrien Livestock selling team had sold 164 Rhamily and Glen-Byrne Poll Merino rams at auction (94 per cent) for a combined average of $1621.

This showed a $332 jump in the sale's collective average and an additional clearance of 33 rams sold compared to last year's sale where 131 of 160 rams (82pc) sold under the hammer to average $1289.

Nutrien Livestock sale auctioneer and the Edmonds brothers' livestock agent Grant Lupton said it was another excellent even catalogue of rams presented by the Edmonds family that sold to stronger buying support.

"While we didn't reach any great heights, it was a very solid sale from the first to the final pen," Mr Lupton said.

"I was really impressed with the quality of the wools and bodies of the rams and the depth of the catalogue gave buyers plenty of selection.

"We had a number of buyers return to the sale this year due to seasonal conditions, a couple of buyers needed bigger volumes of rams and we picked up a couple of new buyers.

"Congratulations to Bruce and Ray on the excellent presentation of rams and the rewarding results."

The Rhamily stud kicked off proceedings with a team of 85 February and April shorn Poll Merino rams with only the two rams overlooked at auction to post an average of $1801.

Penned in lot two, the 121kg ram by Kamballie Bobcat was part of the 18 February shorn prepared rams that opened the Rhamily run.

Buyer Michael Sudholz said the ram would join a selection of the Lewisdale-Corrigin and Rhamily blood nucleus to produce replacement ewes and flock rams for their 3800 commercial ewe matings.

"He has the wool we are looking for and will go well over what we are producing," Mr Sudholz said.

"Bit longer in the staple and good nourishment in the tip which helps stop the sand and dust getting in."

Original stud clients King Farming Pty Ltd, Calingiri, invested in large numbers annually and always prepared to compete at the top end of the market for their selections.

This proved the case again this year with the King family collecting a team of 11 Rhamily rams costing from $1000 to the sale's equal $3400 second top price paid deep in the catalogue in lot 50.

Long-time buyers the Glass family, Fenwick Farms Suffolk and White Suffolk studs, Calingiri, built a team of 12 Rhamily rams costing from $1200 to $3000 for a strong average of $2350.

They paid their $3000 top price on three occasions for sons of Bobcat, Will and Manunda Jacko.

Return Wubin graziers PG & PM Nankivell was the sale's equal volume buyer with a haul of 14 Rhamily rams operating at all values between $900 and $2900.

The Glen-Byrne stud's team of 85 Poll Merino rams followed the opening run of Rhamily rams and while prices only reached modest highs, buyers were consistent throughout to significantly improve results from last year.

Bruce Edmonds donated the proceeds of what is likely to be the final Merino ram offered at the sale after the phasing out of the Mannalea stud, to the relief efforts of those affected by Cyclone Seroja.

Phil Edmonds continued his strong buying into the Glen-Byrne line-up where he finished with four rams which included the stud's $2800 top and $2700 second top prices.

The top price was paid for lot two, one of 19 February shorn prepared rams to open the Glen-Byrne run.

Mr Edmonds said they would join 1900 Merino ewes to lamb from mid-April to May.

He said the depth of wool quality was even throughout the sale with plenty of selection available for what he looked for.

The most influential buyer of the Glen-Byrne team was Mareeba Farms, Ballidu, with an equal sale high haul of 14 rams costing all values from $1100 to $1900.