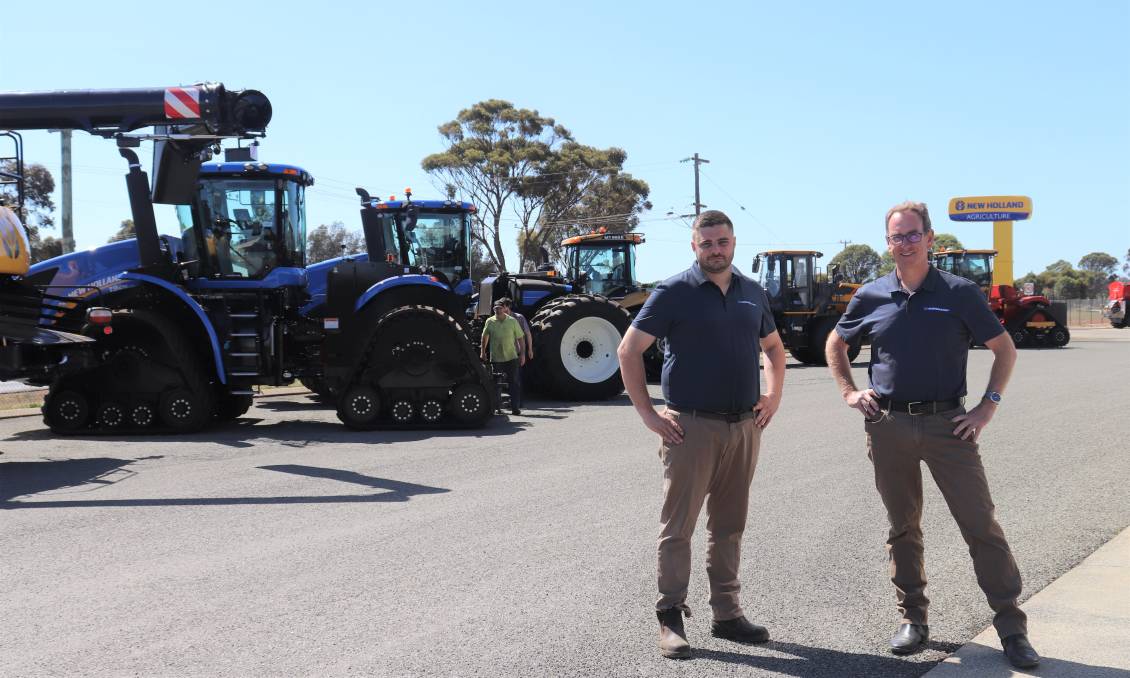 "Industry wide there are supply issues and minimising logistics holdups that could extend the down time of harvest machinery is what we are about."

IN a worst-case scenario, some combine harvesters that break down this year could see out harvest sitting in the paddocks where they stop.

But he is adamant it will not happen to his customers in the Great Southern.

A global move by manufacturers towards just-in-time production, seriously compromised by the COVID-19 global pandemic impact with raw materials shortages and factory shutdowns, topped off by shipping delays and shipping schedule uncertainty, is likely to leave some graingrowers stranded this harvest, Mr Gilmour pointed out last week.

"Industry wide there are supply issues and minimising logistics holdups that could extend the down time of harvest machinery is what we are about," Mr Gilmour said.

"The other problem we have this year, as opposed to any other year in the 16-17 years that I've been here, is there is no new or used stock around - there are no replacement options.

"If your header goes down this year, unless your dealer has good parts support, you will sit in the paddock - there will be headers this year that stay in the paddock.

"When the crop is as good as it hopefully will be this year, you really want your header cranking, you don't want to be down because every minute that crop is out there, it'll be costing you money.

"Service and parts support is going to be the key going forward.

"There is a lot of good product out there of all colours, and different models will come and go, but it will be the servicing of it that will make the difference for the end user - the farmer." Technician Cameron Doak has been with McIntosh & Son for 10 years, starting as an apprentice mechanic.

Improving customer service and parts support - in part to overcome the move by manufacturers to just-in-time production, which does not necessarily fit well with agriculture's seasonal nature with concentrated periods of replacement parts demand - was the rationale behind McIntosh & Son redeveloping its Katanning dealership two and a half years ago.

While the new showroom and offices at the front were glamorous additions, the integrated 46 metre by 35m parts warehouse with 1000 pallets racking capacity was the sensible solution, not just for the Katanning dealership but as back-up for McIntosh & Son's Albany, Esperance and Kulin dealerships, to a potential problem.

But even their best predictions failed to register a global pandemic manifesting for others the problems they had seen coming.

Each unit has 73 shelves each capable of carrying up to 500 kilograms of parts, with the distance between shelves automatically adjusted to suit the height of the tallest item loaded on each shelf, to maximise storage capacity.

Each shelf is divided electronically into 192 identifiable segments and when the units are loaded, the part number, the segments in which they are stored and how many were loaded, is recorded on the computer controlling the Hanel system.

It links to computer screens for five parts interpreters at the front counter.

Once a parts interpreter identifies a part number, the system can tell them how many are in stock and the Hanel unit can locate and retrieve the part within 15 to 20 seconds of the parts interpreter sending an electronic order to the Hanel controller.

The units maximise small parts storage space and free up pallet racking for more of the larger parts - McIntosh & Son, Katanning, will carry at least seven complete engines this harvest, for example - to be kept in stock. According to Mr Nehme, each of the original two Hanel units is equivalent to 150 square metres of pallet racking.

Earlier this month two more Hanel units - slightly shorter to fit under the gable roof - were installed and commissioned and the shelves are currently being loaded with some of a $1.5 million harvest spare parts order placed by McIntosh's southern group with suppliers towards the beginning of the year.

The effective extra storage space will be put to good use, Mr Nehme explained.

"It is not just that it gives us capacity to carry more of the quick-turnover inventory, one of our problems is managing the volume of parts we might normally only sell two or three of in a season," he said.

"Demand fluctuates (with seasonal conditions) and sometimes we'll be called on for five or six of a particular part in the one season, so we can now better accommodate that situation."

Apart from increased inventory capacity, the warehouse and Hanel units have brought significant operating efficiencies - in July McIntosh & Son's southern group employed an inventory manager who is expected to bring further efficiencies to the four dealerships in the group.

"You had parts staff at the front counter who would take the order, then they would leave the counter for anything up to 20 minutes while they went and collected all the parts on the order from the various locations around the dealership where they were stored.

"In the meantime, customers were coming in, phones were ringing but there was no one at the parts counter.

"It was very time consuming and very inefficient.

"Because of the scale of what we are doing here, it was a major problem.

"We've got pallet racking seven metres high and the counter staff would have had to jump on a forklift to get parts down - we had to go to a warehousing system.

"Over time, as we add more Hanel units (the warehouse has footings provision for three more), more and more of the faster-moving parts will be relocated from the pallet racking to the units.

"Apart from freeing up more room for larger parts in the warehouse, the racking will become the back-up store for the Hanel units because the pallet racking section of the warehouse, where you have to go down aisles and use a forklift to retrieve parts, is the inefficient part of keeping spare parts." A line of new combine harvesters being fitted with Harrington Seed Destructors in the McIntosh & Son, Katanning, workshop before being delivered to clients.

He said the Katanning warehouse could hold parts on consignment until sold for smaller manufacturers or franchisees based interstate which might find establishing their own parts warehouse in WA cost prohibitive.

"For example, we're talking to (tillage specialists) Grizzly Engineering about carrying a range of parts, including some that currently have to come from over East," Mr Nehme said.

For McIntosh & Son's southern group, the Boy Scout motto of 'be prepared' is their way of doing business.