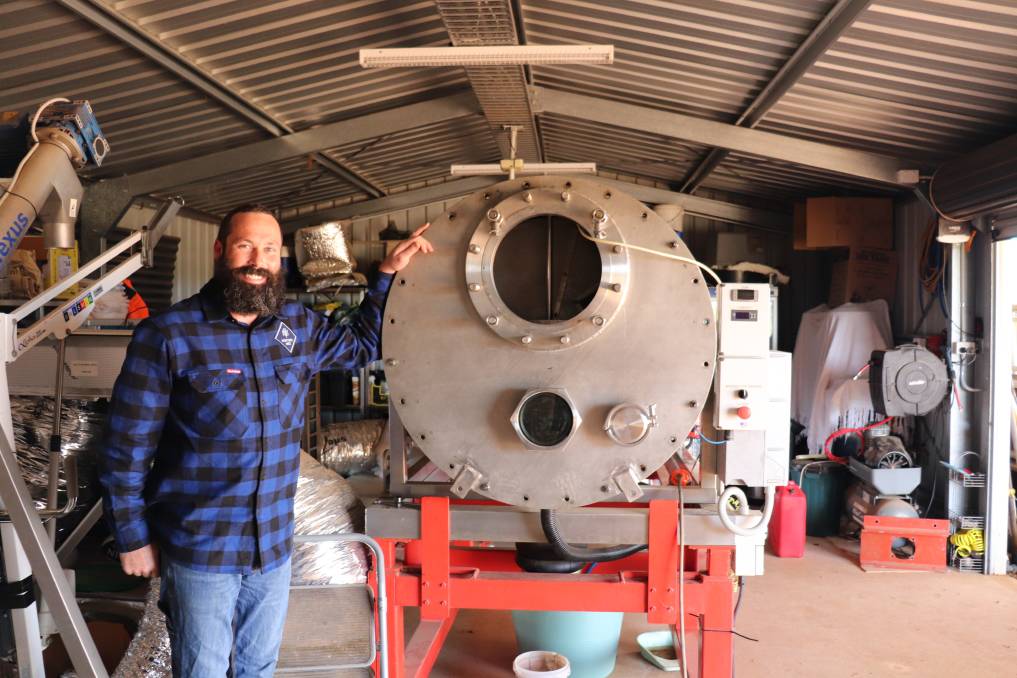 Rex Rowles with his pilot plant on his farm at Goomalling. He is looking forward to expanding it.

"It's going to be amazing for the WA brewing community and WA growers when this all comes together."

ROCKY Ridge Brewing Co, Tolga Farms, Kulin, and a newly-founded WA-based maltser are collaborating on a local beer, scheduled to be released in late October.

The beer will be made from Australian Sustainable Produce (ASP) certified barley from Brendan Savage's Kulin farm and the barley malted by farmer Rex Rowles, who recently built a pilot plant on his farm at Goomalling.

Renowned for their efforts in utilising local and sustainable produce, Rocky Ridge Brewing manager Hamish Coates said Western Australia was lucky to have some of the best quality barley on its doorstep and that it had been "a long time coming" for the business to be able to utilise a local maltser in Mr Rowles' business, Mortlock Malt.

"It's going to be amazing for the WA brewing community and WA growers when this all comes together," Mr Coates said.

"I think it will give them the confidence they need, as there is a little bit of hesitation on behalf of anybody to go ahead and put the processing in required to malt."

With the family behind Rocky Bridge Brewing being farmers themselves, working with local producers and sourcing sustainable produce is a huge part of their business model and the collaboration with Mr Rowles and Mr Savage seemed a perfect fit.

"We love the fact that the barley is ASP certified, we are extremely confident in the product and the collaboration forms part of our goal to exclusively work with local producers and suppliers," Mr Coates said.

"We want to be able to tell the story of Rex and also the suppliers to Rex, because it's really nice to be able to say that there is a single farmer, a single origin and a single family behind a product - that's something we have been pushing for a while."

Mr Coates said another benefit to working with local producers was that it kept food miles down and that they could have their eyes on the entire supply chain.

"It helps us have certainty that the produce is in fact coming from where we think it's coming from and it has the backing of locals behind it," Mr Coates said.

"Unfortunately, the other malting companies are owned by multi-national corporations, so it's nice to have somebody local and small that we can work with."

About 3000 litres of the beer is expected to be brewed later this month, with its name yet to be decided.

Speaking to Farm Weekly on his farm last month, Mr Rowles said he had already sent off a few batches of malted barley to local brewers and distillers from the pilot plant.

He said the past year had been a valuable learning experience for him, as he ironed out any kinks in the pilot plant while going through the government approvals processes to get the main plant up and running.

Acknowledging that the pilot plant was slow and required a lot of hard work to make decent volumes of malted barley, the new plant has been designed to initially have a 10 tonne throughput per week.

"We should produce about 500t per year and I'm putting things in place so we can increase that amount fairly quickly and easily with demand," Mr Rowles said.

"I expect a fairly healthy percentage of that will be contract malting grain from other farmers."

By having the liberty to pick and choose barley providers, Mr Rowles said he would be able to provide malted barley from a specific farm, region or produced under a certain system to meet the specific requirements of his customers.

Having already provided some malted barley to Dandanning Brewery at Mukinbudin, about 500 kilograms to Rocky Ridge Brewing and about 800kg to Whipper Snapper distillery for a single malt whisky, Mr Rowles said he was on track to have the plant up and running and in production early next year.

"Whipper Snapper are very progressive and they've done a lot with other WA farmers so I contacted them about our single origin craft malt and they were really keen to do a whisky with it," Mr Rowles said.

"I sent down a batch from the pilot plant which they did the full mash and distilled and that's in a barrel and needs to age two to five years before it can be called a single malt whisky."

When he was initially approached by Mr Savage to do the malting for the collaboration with Rocky Ridge Brewing, Mr Rowles said he jumped at the chance.

"Tolga Farms are a lot lower input than conventional farms and Rocky Ridge is a brewery that is really pushing their sustainability credentials and has a big push for zero emission beer, so it's definitely an exciting opportunity," Mr Rowles said.

Besides a few smaller orders from over east and internationally, Mr Rowles was fortunate in that he had ordered most of the plant equipment last year from local WA businesses, as it meant he had been able to avoid major cost blowouts and significant delays due to the impact of COVID-19 on supply chains.

"When one rung on the ladder is broken the whole thing can come to a stop, so it can be quite tricky," Mr Rowles said.

"While there are still a few electrical components that need to be imported from overseas from Europe, America and China that are delaying progress, it's still slowly coming together.

"The main equipment is being made by stainless steel fabricators in Perth and once that's in, it will be the first piece of the puzzle and everything else can be built around it.

"I'm hoping to have all of the equipment in before harvest starts and then I'll have tradespeople come in and do the commissioning of the plant."

The cost of the plant is expected to be a little more than the initial estimate of $800,000, mainly due to the fact that Mr Rowles is also building for future expansion due to the large amount of interest shown in the project.

He said the amount of knowledge he had gained in setting up the pilot plant had made the process worthwhile and that he was looking forward to being able to supply a superior, premium malt to local brewers and distillers.