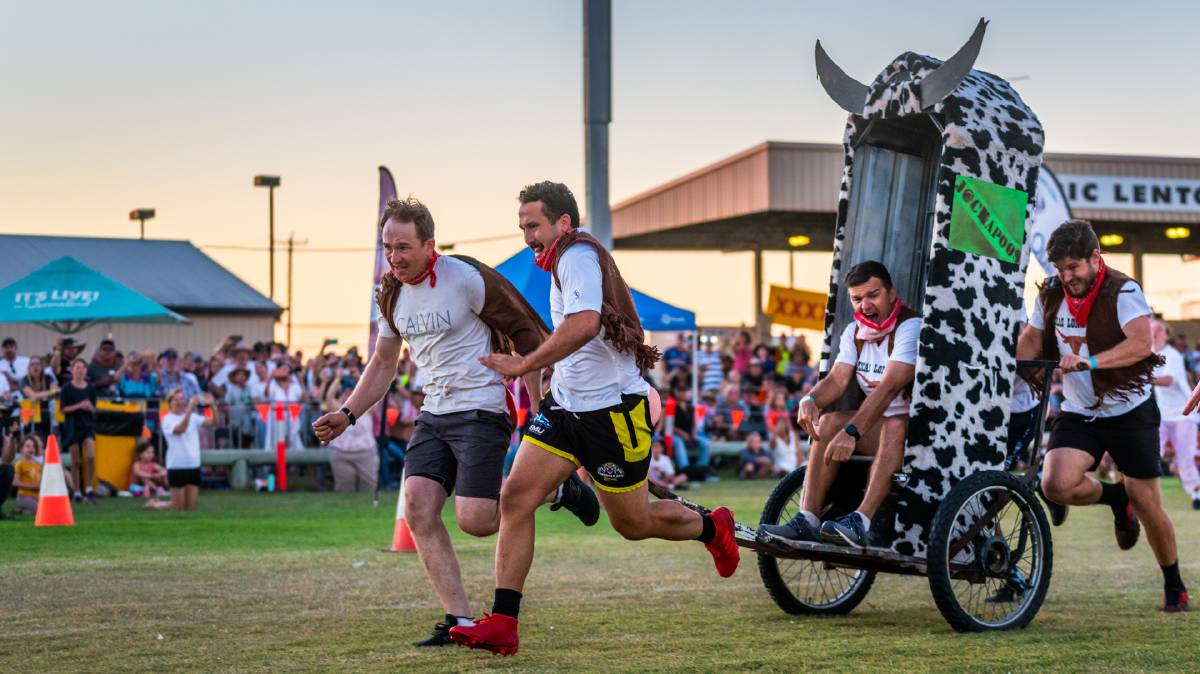 The Jacka-poos in action. Photos: supplied

While international competitors may have been sidelined this year for the Quilton Australian Dunny Derby, competition remained as fierce as ever in the western Queensland town of Winton on Friday night.

While international competitors may have been sidelined this year for the Quilton Australian Dunny Derby, competition remained as fierce as ever in the western Queensland town of Winton on Friday night.

Competitors from all over Queensland joined in, including reigning world champion dragon boat team, the Pandanus Paddle Club, from Brisbane.

The dragon boat team, who were due to compete in the 2020 dragon boating world championships in France, traded their overseas trip for Winton with their sights set on claiming a championship of a different kind, the 'Golden Throne' at the Quilton Australian Dunny Derby.

The team threw themselves into the deep end with their strong pull bringing them fourth place in the Ladies Bracelet division.

Team captain Carmen Que said, "It may not be France, but we've had an incredible time. It's the first time we've been to Winton, and we're ready to train up to come back for the derby in 2023!"

The hilarious and often referred to as "quirky" competition is a tribute to the humble outhouse, "dunny" and "thunderbox".

Inventions that were once so necessary to everyday life have mostly been traded for modern plumbing around Australia, except out in Winton, where the townsfolk throw out the welcome mat and invite visitors to come and compete in the derby.

Larrikin by nature, the town's longest-running celebration, the biennial Outback Festival, is in the midst of its celebration with a record crowd of over 5000 people, swelling the town's population by 500 per cent.

"The Quilton Australian Dunny Derby is a 200m obstacle course that attracts all kinds of dressed-up dunnies and their jockeys," explains festival coordinator, Robyn Stephens OAM.

"We also stage tough sports events, such as the Outback Century Cycle Challenge and the Outback Iron Man, Woman and Junior events." A competitor in the obstacle course in the main street.

Winton is often described as a town with a big heart and an even bigger imagination that punches well above its weight in tourism experiences, from stunning ancient landscapes and national parks to the downright quirky.

There's the Australian Age of Dinosaurs, which was created after the discovery of fossils by a local farmer, the Waltzing Matilda Centre, a museum created in honour of the famous song, and the unique Musical Fence.

"We had some great people, forefathers back in 1968, who formed the Winton Tourism Association about 10 years before any other community out west had done," explains Winton Shire mayor and Dunny Derby competitor, Gavin Baskett.

"So, tourism started back then, and it's really progressed to be one of the backbones of the community, and following some tough years of drought and then COVID-19, we can't believe the tourism boom 2021 has been," he said. "It's like a modern-day gold rush." 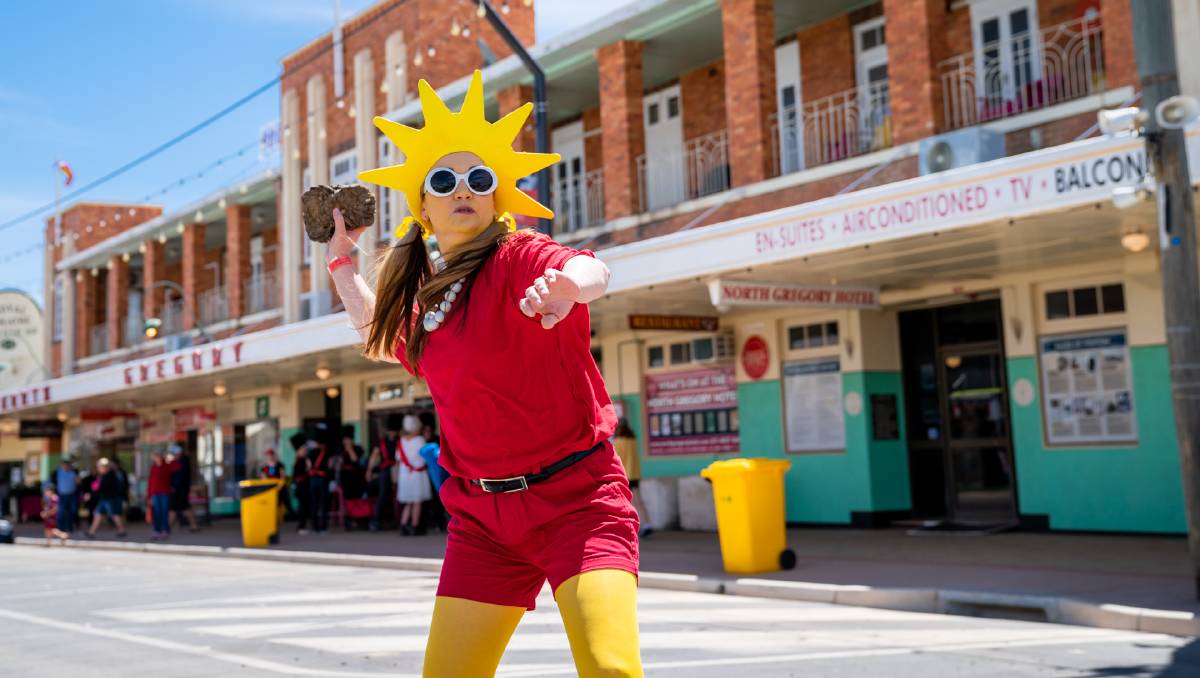 Ms Stephens said that although they normally attracted international competitors, from as far away as Scotland, Iceland and Germany, competition had been as fierce as ever.

With competitors from Brisbane, Townsville, Rockhampton and local teams, the event packed a punch of laughter, hosted by Winton's own comedic locals, The Crack-Up Sisters.

Teams included the 'Corona Crapper', 'Old Farts', 'Lockdown Loo' and 'Stinkerbelle', who came entirely dressed in their finest attire and had the record crowd in rapture.

Crowd favourites, 'The Rocky Horror Shitty Show' threw the crowd into a time warp, riding home with the Best Presented team and winners of the Ladies Bracelet division. 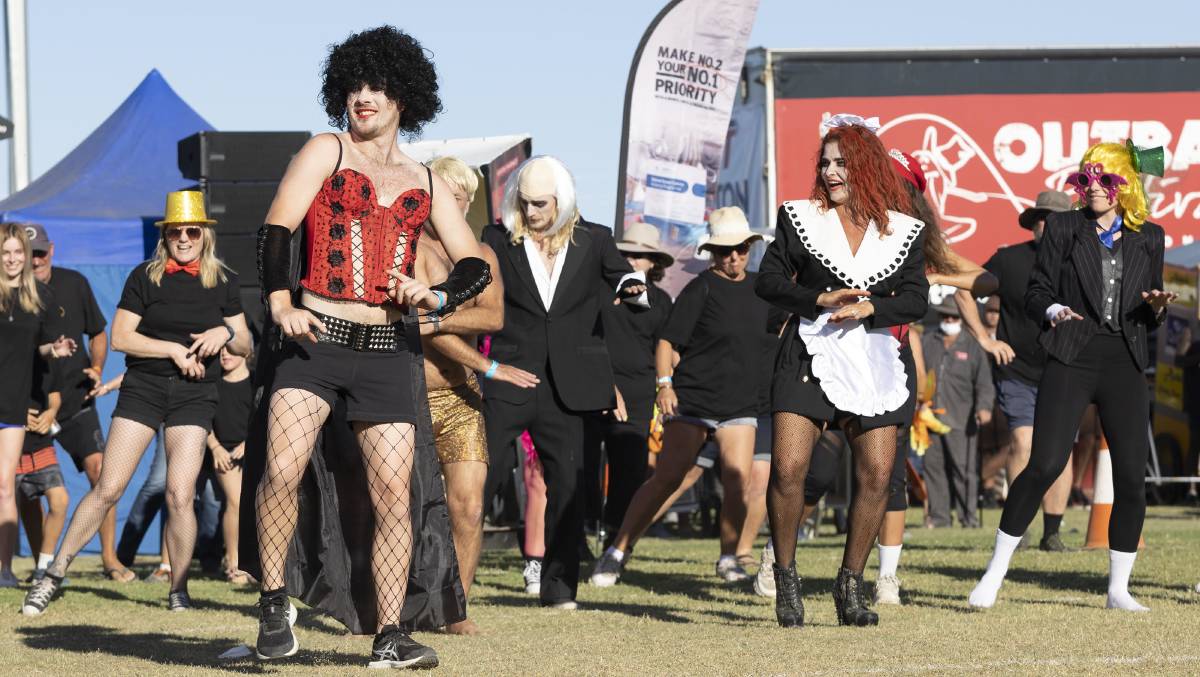 Kingaroy's Sarah Shadforth, Dunny Director of 'The Rocky Horror Shitty Show' said they had to do something the crowd wouldn't forget.

"We knew the Rocky Horror theme would really draw the crowd's attention and raise a few eyebrows. We haven't taken the title for the Best Presented for the last few years, so we knew we really had to step it up this year."

For those not racing, up for grabs was a lifetime pallet of Quilton toilet paper (that's over 25 kilometres of loo paper!), won by lucky door prize winner Jeremy Bridges from Brisbane, who plans to donate the rolls to a local Winton charity.

So, for many people who may have called the last 18 months "sh*t", the people of Winton have taken the challenge head-on and tackled it with the humour and resourcefulness that only people of the outback know how.

ALSO IN THE NEWS: