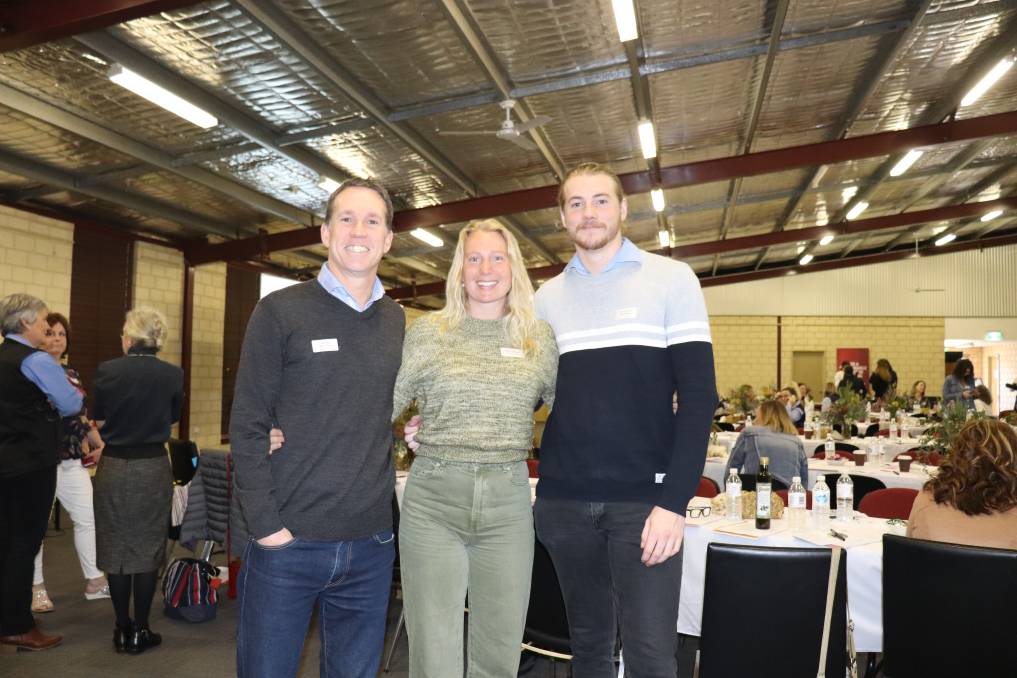 "We're still very much growing & focused on achieving much greater growth as the years ago on."

WIDE Open Agriculture's (WOA) success didn't happen overnight, however part of it did.

When COVID-19 struck Australia in March 2020, the Australian Securities Exchange-listed company experienced 800 per cent growth in its online sales in just two days.

But the journey prior to that point wasn't necessarily smooth sailing.

WOA managing director Ben Cole shared the company's journey with two of his employees, Christie Stewart and Peter Downey, at the annual Women in Farming seminar held recently at Wagin.

Dr Cole founded the business with Anthony Maslin, who had gone through a huge personal loss when his three children and his father-in-law died in the MH17 tragedy in 2014.

WOA is a '4 Returns' company, meaning it seeks to deliver outcomes on financial, natural, social and inspirational returns.

"It was inspiration that brought Anthony and I to the idea of building this business in agriculture," Dr Cole said.

"WOA's purpose is around trying to draw a deeper connection between farmer and consumer.

"We chose to focus on the terms 'regenerative' and 'conscious' food consumers -for people who are interested in where their food came from, how it was produced and its impact on the farmer.

"We see it as an infinite loop because we believe that the two have to be brought together - the closer the farmer and the consumer get, the more we can have a real conversation about both the challenges of farming but also the expectations of the consumer."

Having been running for almost eight years, Dr Cole said there had been some key learnings along the way.

One of WOA's first initiatives was a half hectare 'smart' horticultural shade house at Arthur River, but "frankly it didn't work" and was a tough pill for the company to swallow.

"It was our attempt to do something innovative that layered a new business on an existing broadacre crop," Dr Cole said.

"It was exciting, it was an automated shade house, so it protected the vegetables from the bearing sun.

"But we found that financially, it wasn't at a big enough scale - it has to be at a two hectare scale, which we got told but we thought we'd make it work."

The company also found it was difficult to retain horticulture-trained staff in a broadacre region.

But the failing of the shade house ended up birthing new ideas for the company.

"We learnt that there were some amazing farms out there who were farming differently and in a way that we believed consumers wanted to hear, so we wanted to utilise that and build a food brand that communicates their story, which is Dirty Clean Food (DCF)," Dr Cole said.

DCF offers farmers a different pathway to market to sell their products, with both online and hospitality channels.

It is now one of WA's leading regenerative food brands, with its staple products being beef, lamb, pork, chicken, oats and lupins.

The decision to focus on those products was led by long-time regenerative farmer and WOA non-executive director Sturart McAlpine, Buntine, who emphasised the importance of looking at the whole farming system.

While WOA's broader ethos is to leave the farm environment in a better condition than when they found it, Dr Cole said the financials have to come first in order for the business to succeed.

"We have come to recognise what farmers and everyone in business recognises, financial is first and foremost without that, everything falls away and I'm excited to say that we've been growing as a business and we're on track to be a $6 million turnover business," he said.

"We're still very much growing and focused on achieving much greater growth as the years ago on."

The company also learnt the importance of being responsive to customer demand.

"Since COVID, we've noticed that people are looking to shift to more of a flexitarian diet and to be clear, we sell pork, beef, lamb and chicken - we believe that people should continue to consume animal protein in their diet, but we also recognise that people are shifting towards increasing the amount of plant components in their diets," Dr Cole said.

"So we've responded to that by focusing on our milk, which stems from both oat milk and lupin protein.

WOA has incorporated lupin into a plant-based burger, udon noodle, into its oat milk and also a protein supplement drink.

What does it mean to be a regenerative farmer and supplier for WOA?

She's at the centre of the entity loop which Dr Cole mentioned, in communicating to farmers and customers and transferring the information to each.

But the bulk of Ms Stewart's role involves overseeing WOA's production protocols, which are the rules about how products need to be produced, processed and delivered to the receival points.

The protocols are specific to each individual products to align with customer demands and expectations.

The main requirement for grain products is that there is no chemical residue detected and the rest of the protocols are largely about how the crops are grown, including maintaining ground cover as much as possible, using no-tillage and reducing the reliance on synthetic fertiliser inputs over time.

"Everyone is a regenerative farmer already to some degree, because it's a scale," Ms Stewart said.

"We describe it as being on a 'regenerative journey', whether you're in year one or year 20, everyone can be part of it if they want to be.

"It's flexible and easy to become part of what we do."