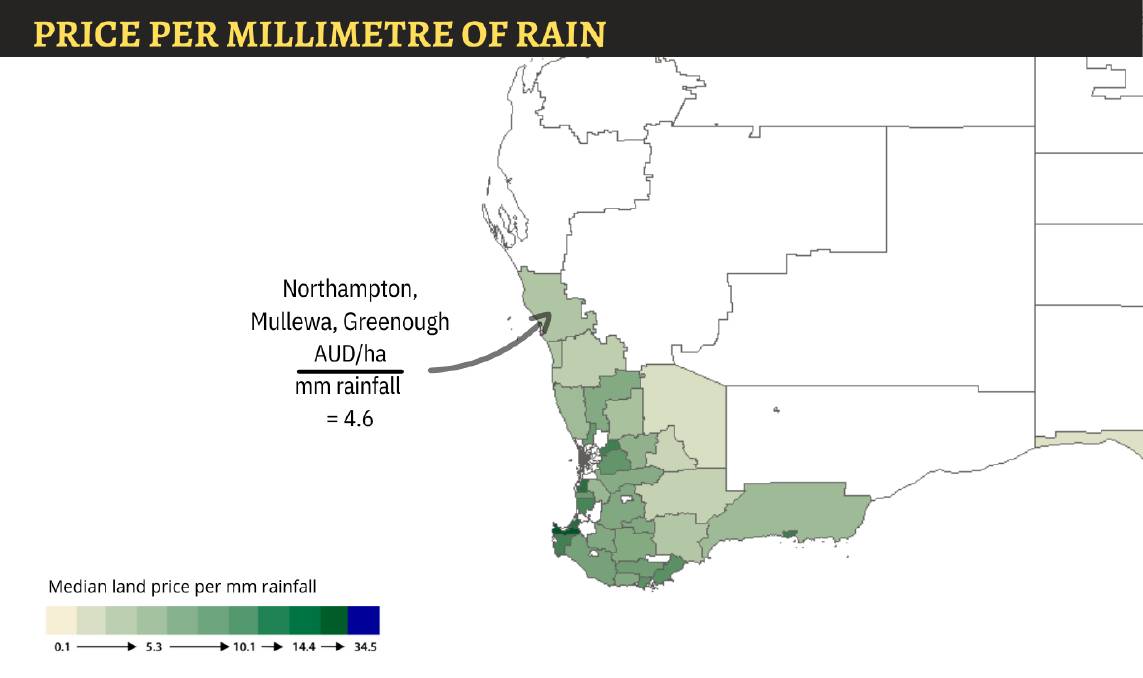 RAINING MONEY: Analysis by Rabobank and DAS shows the differences in farmland prices between regions once rainfall is taken into account.

Flexible buyers who "do their homework" can still find pockets of extra value because some regions are not attracting the prices they deserve, Rabobank analysis shows.

A pioneering report comparing the price of land in different regions against rainfall and even productivity data shows just why Western Australian farmland has become a darling for corporate investors.

The amount of crop area in WA with a foreign interest is up 63 per cent since 2016.

At the same time the supply side of the market was tight.

The number of properties on the market fell 29pc in 2020 and the number of sales is on track for another significant reduction this year.

A string of very profitable seasons and limited opportunities to expand continued to drive land price growth in Western Australia.

Succession planning, Mr Lefroy said, was also playing a greater role in driving demand than in other states, impacting both the buy and sell sides.

In such a tight market, FOMO is understandable and Rabobank expects overall property prices to remain firm during the next five years, with growth at its sharpest in the next two years.

"High prices and the likelihood of another above-average harvest this season will continue to fuel demand and limit the number of properties for sale."

At the national level, Rabobank's "base case" forecast is for national farmland prices to lift 10pc in 2021 and 8pc in 2022.

"We think it's likely that commodity prices will remain supportive for the next 24 months, while we expect interest rates will remain at record lows until at least 2024," Mr Lefroy said.

Stagnation or even a down-shift in prices was still possible but only if there was "a multi-year interruption", he reported, to a combination of commodity prices, production, or interest rates.

Not all states the same

While Rabobank figures show 6pc year-on-year growth for 2020 for Australian farmland, the difference between states is stark.

Tasmanian farmland has continued its stellar growth recording a surge of 28.3pc in a year, taking its median farmland price to $15,999/ha.

As a whole, Queensland has Australia's lowest farmland price of $2734/ha but it grew a hefty 15pc.

Western Australia was next with a 14.1pc increase taking its average to $3244/ha.

Value pockets in every state

Most WA regions had seen considerable growth, with Bunbury topping the list, with prices rising by roughly half since 2019.

Mid-rainfall Esperance appeared to have stabilised but prices in the south-east wheatbelt, mid-west and north-west wheatbelt have all ramped up significantly this year.

"In line with trends in other states, we are now seeing prices of low-rainfall regions accelerating," Mr Lefroy said.

The report also revealed big differences in value based on rainfall, reliability and productivity.

"For those buyers who do their homework and have the flexibility within their business to seek inter-regional purchases, there may be greater productive value to be had for their capital investment," Mr Lefroy said.

Rainfall, though, isn't everything when it comes to the performance of Australian farmland.

To help better gauge value, Rabobank has partnered with Digital Agricultural Services to measure both the productivity and reliability of different farming regions.

Put simply, regions in the lower right hand column of the chart hit the sweet spot of reliably high production.

The smaller the bubble, the lower the price. The colour of the bubble simply shows which state the region is in.

For example, the chart shows that the red region priced at $2574/ha presents incredibly good value compared to the less productive and less reliable region, still in Queensland, priced at $8368/ha.

Wes Lefroy was reluctant to name the regions publicly.

Still, he said, the principle was sound and was supported by data suggesting that farmers were looking beyond areas where price growth had outstripped productivity performance.

They were high and/or consistent rainfall, a lot of farmers with expansion plans, lifestyle benefits, and the ability to grow high-value or multiple production types.

"Now, regional trends have been overwhelmed by the strength of the macro factors," Mr Lefroy said.

"That is, regions that scored low on those four metrics are now recording upticks in growth, fuelled by strength in the three macro factors: prices, production, and interest rates.

"This includes demand from both local buyers and buyers from higher-priced regions who have expanded their search for land with greater productive value."