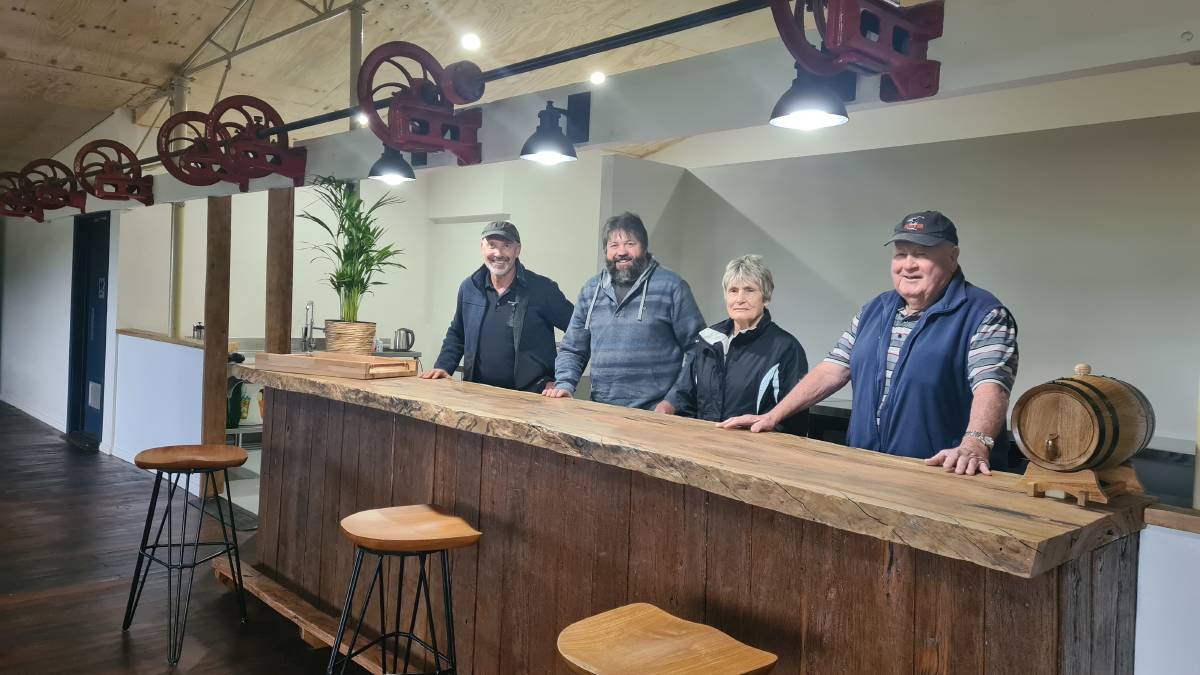 The minds and money behind Woodlands Distillery Kelvin Ridgway (left), Peter Waters, Merrylin and Trevor Stone. Missing is Tony Slattery, who came up with the initial idea alongside Mr Waters.

Inside what was once an old shearing shed, you will find Western Australia's newest whiskey, gin and vodka distillery. 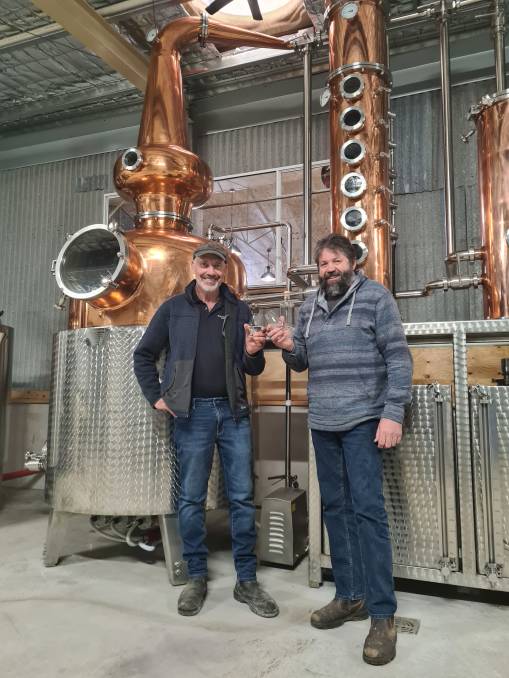 Kelvin Ridgway (left) and Peter Waters are excited to open Woodlands Distillery to the public next month.

INSIDE what was once an old shearing shed, nestled in the base of the stunning landscape of the Porongurup Range, that's where you'll find Western Australia's newest whiskey, gin and vodka distillery.

Founded in 2018, the idea was initially sparked at an onfarm fertiliser meeting between Peter Waters and his client Tony Slattery.

After many years of passionate conversations about their mutual love of whiskey, the dream of building a distillery began to evolve.

"I've been passionate about distilling for a long time," Mr Waters said.

"As I went through it, I was making good stuff at home but was getting to the end of the road of things to try, so I wondered what the next step was.

"I knew that in order to open a proper distillery, I would need some help from some people who were as passionate about the idea as I was."

The first step in making the dream become a reality involved Mr Waters attending a Master's Distillers course in Tasmania.

On completion of the training and with renewed determination, Mr Waters and Mr Slattery then set about finding a suitable location to build a distillery.

Mr Slattery approached his long-time friend Kelvin Ridgway, who was searching for an off-farm interest and shared the men's vision.

Funding this dream was always going to be a challenge, which is when Mr Waters' friends and neighbours, Trevor and Merrylin Stone, retired farmers from Borden, were invited to join the team.

For Mr Ridgway, starting a distillery seemed like a natural choice, given his family had a history with the whisky industry in Scotland and his relations over there still deliver barley to Glenfiddich. 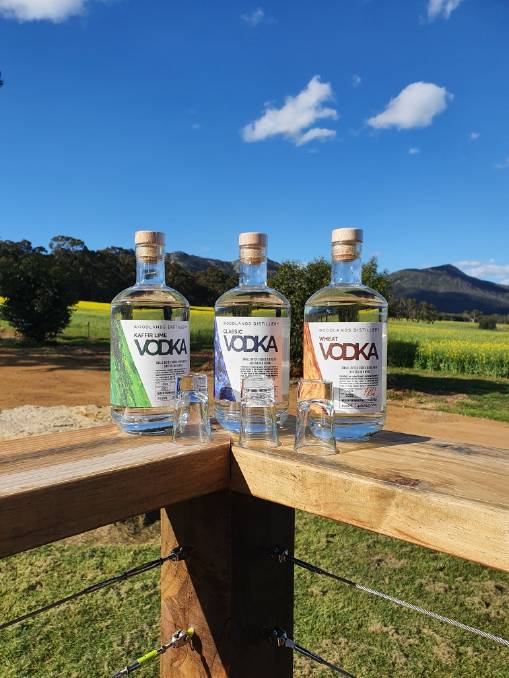 Currently Woodlands has three different vodkas classic, kaffir lime and wheat which will be available to taste and purchase once the doors open.

"With the family over in Scotland it was something I had always thought about, so when someone came to me with the idea I jumped on it," Mr Ridgway said.

"I run a commercial seed business and a cattle farm with about 600 head at the bottom of the Porongurups, so I knew I had the land and the water to make it possible."

When looking for a location for the distillery, it was Peter and Tony who decided that an abandoned shearing shed on Kelvin's property was the ideal space, with the trio loving the idea of people walking into the venue and being able to smell nothing but wood and whiskey.

"It was more of a coincidence that we ended up using what was already left lying around," Mr Ridgway said.

"Upcycling is something we stumbled upon in the process of establishing this distillery, but it has assisted in creating the charm it holds today.

"From converting the old shearing shed into the distillery, to using the weathered hardwood timbers that once formed the sheep yards which now take centre stage as the barn door."

Woodlands Distillery is a project already almost three years in the making, with the first conversations having initially been held in November 2018, and the partners are facing at least that amount of time again before they put any whiskey into a bottle.

But they're far from sitting around and twiddling their thumbs, instead working on creating other spirits including vodka, gin and brandy.

"Whiskey has to sit in a cask for a minimum of two years, but a lot depends on the distilling style - there are so many factors that come into play and until you get to the right stage to taste it, you just don't know," Mr Waters said. 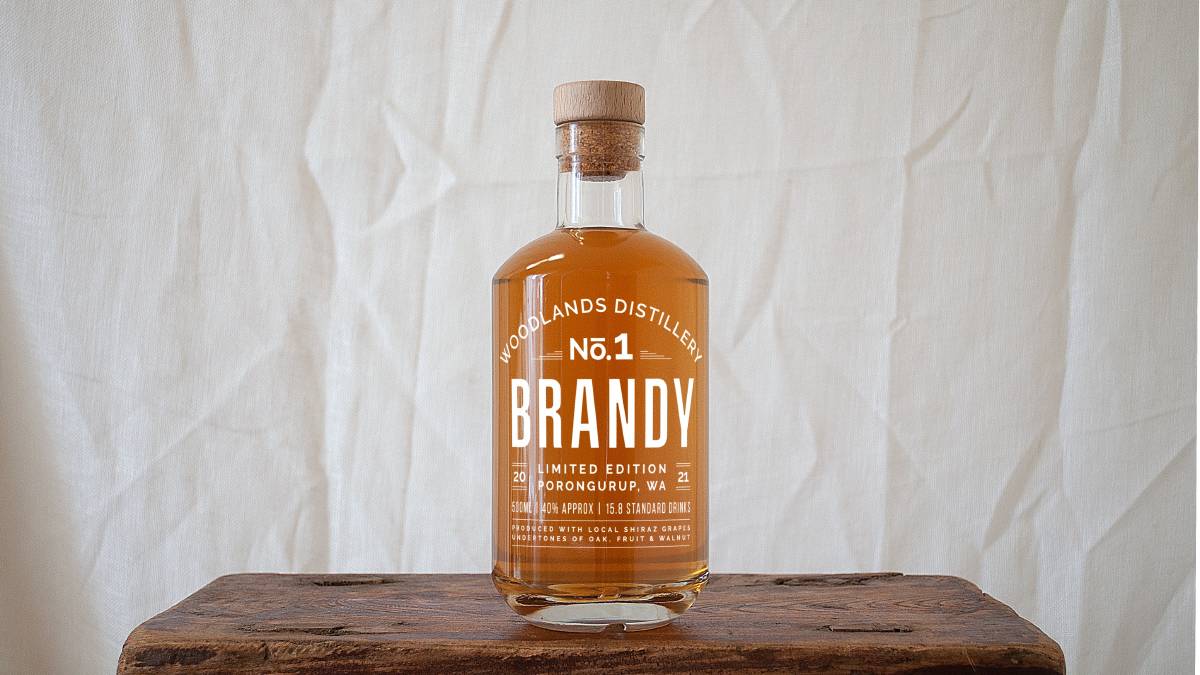 Woodlands Distillery's six-year-old brandy is already available to purchase from The Bottle-O on North Road in Albany, as well as Liquor Barons in Melville, Perth. Photo by James Walmsley Design.

"We're thinking we'll probably leave it to mature for three or four years, so the vodka and gin give us something to work on while that happens and they're also good fun to make with their own unique processes."

Currently Woodlands has three different vodkas - classic, kaffir lime and wheat - as well as a six-year-old brandy, which will be available to taste and purchase once the doors open.

When it comes to the whiskey, the focus will initially be two core types - a single malt and a wheat - with the new make spirit having been made entirely from grain provided by local farmers and poured into ex-bourbon casks for the first time in July.

However with Mr Ridgway being a seed merchant, he grows a lot of different grains, so there is a likelihood of a rye whiskey and a few others coming along down the track.

"That first bottle of whiskey is the ultimate goal and the other spirits are helping us get there, but putting the good stuff into a bottle for the first time, that's the pinnacle," Mr Ridgway said.

"We continuously aim to make each product uniquely Australian by taking inspiration from what is native to the area, such as the natural water that is sourced from above the granite rock.

"Where we can, we source native botanicals to infuse their flavour into the gin and the cereal grains used to make the alcohol are all locally grown - these combined attributes make Woodlands a unique distillery and gives the products a distinct flavour."

The water for all the spirits is sourced on site as Woodlands has access to natural spring water which is gravitated up by a solar pump.

Since a large portion of alcohol is made up of water it's essential to use only the best and is something which also makes the spirits stand out from the crowd.

"The bi-product nutrient-enriched water from the distilling process is redistributed into the surrounding 450 acres of farmland, acting as fertigation," Mr Ridgway said.

"Meaning we are able to avoid having to cart water to be disposed of elsewhere and consume carbon miles on the roads."

Through the process of forming the distillery, the partners stumbled across areas where they had a choice, waste or re-use.

Due to the surrounding land the distillery is placed on, they have been able to incorporate a more sustainable approach to the distilling process of their spirits.

"We're able to control the entire growing process of the grains used to produce our spirits, which means we know precisely what goes into our products and can be completely hands-on for the entire distillation process," Mr Waters said.

"The spent grain waste that occurs from making the vodka is happily received by our cattle in the surrounding paddocks, so instead of treating the product as a waste we are able to put it to good use."

Woodlands Distillery is set to open its cellar door to the public next month, while the vodkas and brandy are already available to purchase from The Bottle-O on North Road in Albany as well as Liquor Barons in Melville, Perth.

The distillery is also offering the chance to secure a Collector's Edition - one of the first 700 bottles of single malt whiskey, each of which will be numbered and come with an authentication form when it comes out of the cask in about four years.

In Scotland, it is law that the product be spelled 'whisky' whereas in Australia, distilleries can choose if they spell it 'whiskey' or 'whisky' and usually pick the spelling which more accurately reflects the style of dram they will be producing.