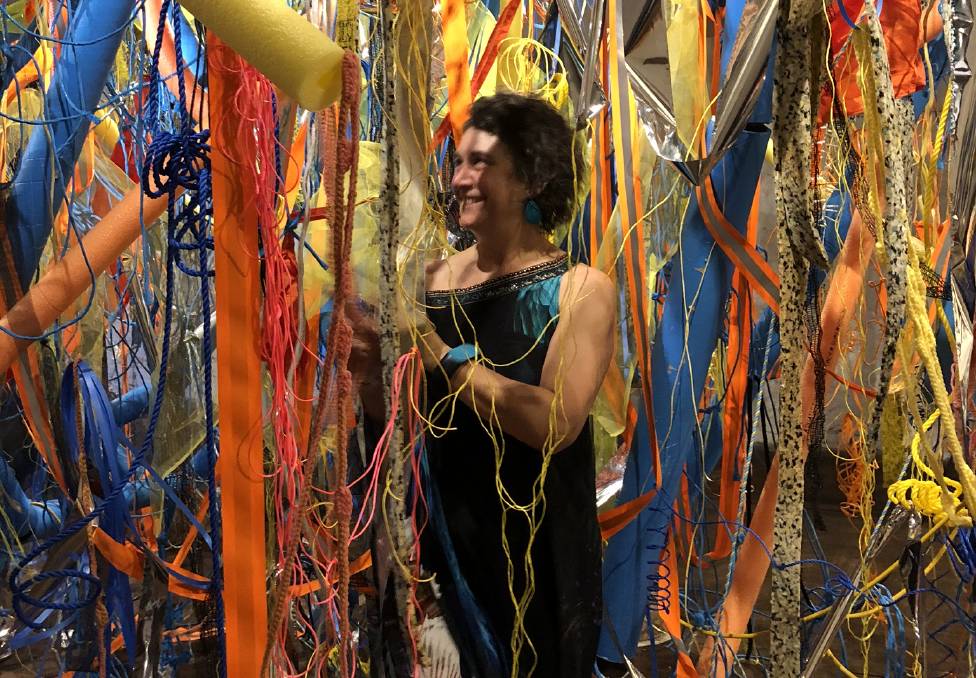 A recreation of Borden artist Jill O'Meehan's Blue Poles installation is at the Solomon Merchant's café at Albany, venue 40 in the program.

IMAGINE yourself walking through a painting.

With different textures and colours hanging from the ceiling and dangling around you, representing multiple layers of paint.

That is just one of the dozens of artful experiences being featured at this year's Southern Art and Craft Trail, which is on now until Sunday, October 10.

The installation piece (left) by Borden artist and farmer Jill O'Meehan is called Blue Poles, which is her interpretation of what walking through the famous Blue Poles painting by Jackson Pollock would be like.

The painting was Australia's most controversial art acquisition, as then Prime Minister Gough Whitlam authorised the National Gallery's purchase of the painting for $1.3 million, which sparked debate about political extravagance and the value of abstract art.

Ms O'Meehan said the idea to reflect on the painting came about with three other female artists and she presented the Blue Poles installation at the Moores Building Contemporary Art Gallery.

"I did a large installation hanging from the ceiling that represented walking through a Jackson Pollock painting, because it's layers and layers of splattered paint," Ms O'Meehan said.

"So I had a lot of colourful objects hanging from the ceiling and you could walk through it - it included rope, crocheted cord, electrical cords and was all blue, yellow and orange and a bit of silver which were the sorts of colours he used."

For the Southern Art and Craft Trail, Ms O'Meehan has taken slices of that installation and hung them from the ceiling in Solomon Merchants café at Albany. 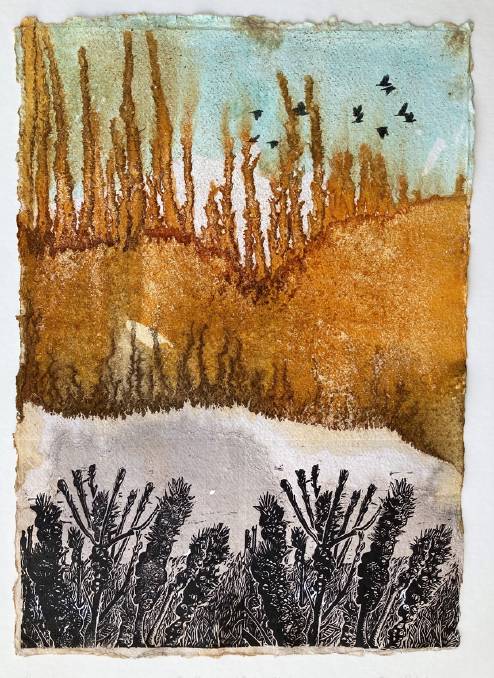 Titled 'The Stuggles of Banksia Montana, this artwork by Ms Robertson has been created by firstly 'rusting' the paper to create a background indicative of an Australian landscape caught in a bushfire. It has then been further rendered in coloured pencil to bring out the tree shapes that have been created as part of the rusting process. The lino cut images are taken from a photo of the endangered, burnt Banksia Montana. This plant exists in a secret location on the Stirling Ranges in South West Western Australia and is threatened by constant bushfire. The cockatoos have been created with a solvent transfer. Ms Robertson's work can be viewed at venue 24 in the program.

"It still provides a feeling of being inside the painting, but it's a different version of that installation," she said.

"All paintings are layers of colours but in a painting you really only see the top few layers, so to be able to walk through or in a Pollock painting is a bit chaotic but interesting.

"I was really going for an immersive feeling which shuts out everything around you.

"Then you can look at the micro elements, focus on what's there and what you see in the layers.

"That's the process that I hope the viewer can get a feel for."

The Southern Art and Craft Trail offers the opportunity to discover new and returning artists who are based around the Great Southern through a variety of exhibitions, workshops and visual art experiences.

From galleries, to open artists' studios, 'mini' art trails and great food and wine, the trail has an emphasis on celebrating local talent, craft and creators.

"The trail provides artists with an opportunity to be able to exhibit their work and to make sales, but it also provides visitors the opportunity to go and see art - because there are many exhibitions on at one time which creates momentum as people are more likely to come across one by accident or a group of people can make a day of it visiting a few," Ms O'Meehan said.

"It creates a lot of awareness about different art and local artists."

A focus of this year's trail was to engage the community more, particular young people - both artists and art consumers. 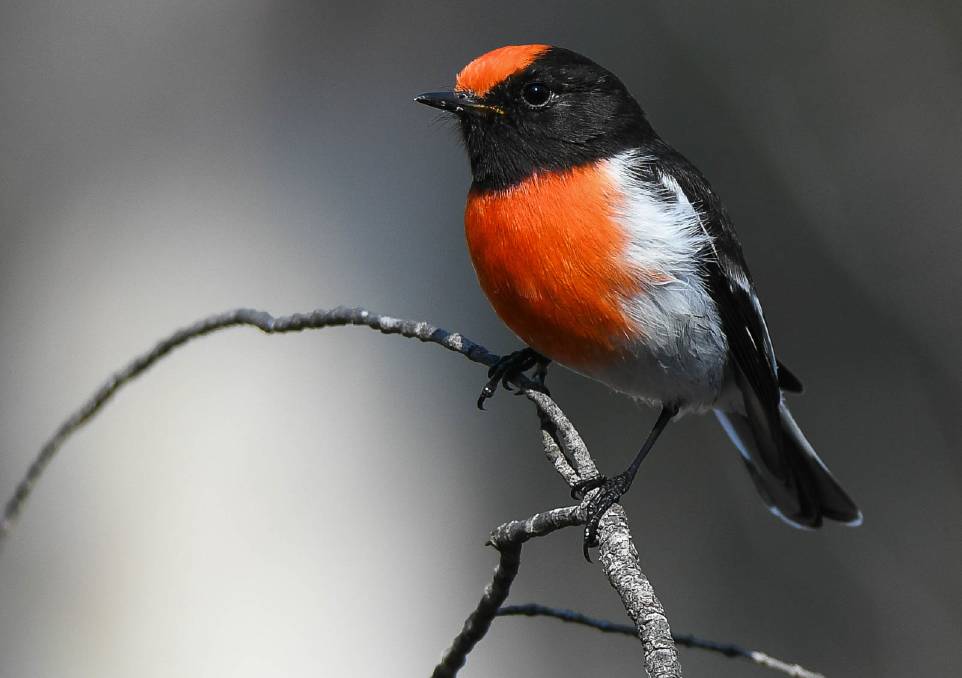 Kojonup photographer Alan Goodall images of local birds is set to be a highlight of 'The Beauty of the Buch in Marco' exhibition, which is a collection of works from Kojonup's natural environment, held at the Kodja Place, Kojonup, or venue two in the program.

Also new to this year's program is an initiative which will share the work of the region's primary and high school students, with exhibitions being in various towns in retail venues and windows (students' pieces are not for sale).

Ms O'Meehan joined the ArtSouthWA board this year because she wanted to share her experience of installation art with others and introduce those ideas to the art trail.

As such, she will be running public art installation workshops at Katanning, where attendees can create and install bright and colourful imaginary flora and fauna in the Katanning town square using recycled materials.

"I'm running these workshops so I can teach people skills and give them ideas and inspiration on how to tackle making, creating and installing artwork in a community," Ms O'Meehan said.

"Hopefully we will inspire people to then do those sorts of things themselves for their community.

"By me being on the ground and teaching people how to do installations in a creative way, that's exciting to bring it down to the grassroots."

Following a passion for art

Describing her work as "multi-disciplinary and eclectic", Ms O'Meehan became an artist a little later in life, after her children, Holly and Michael O'Meehan, had gone to university to study art themselves.

"It was perfect timing - my children had gone to university in Perth, our farming business had grown to a size where I didn't need to be working in or on the business all of the time as we had great staff and specialists, so most of the daily jobs didn't require me and I had the free time and space to go to university," she said.

Ms O'Meehan followed her children to university a year after they had started and they were very supportive.

"It was lovely to be at university with my kids and it was so nice that they were happy to have me there," she said.

"They encouraged and mentored me because I hadn't written an essay since 1983, so it was a steep learning curve.

"There were some art students around my age and a lot were straight or a few years out of school - my children's age - but everyone was so inclusive and we were all there for art."

Holly now works as an artist and is a studio technician for the Fremantle Arts Centre.

And they often work together as a mother and daughter duo, including an installation called the Golden Wattle Hookers.

"They were 3D sculpture forms that didn't follow any rules," Ms O'Meehan said.

"It's a play on crocheting the cookbook and 'hookers' refers to how we use hooks to crochet and it's a bit naughty."

Like many artists, Ms O'Meehan sees art as a form of therapy and relaxation.

"It's a process that allows the quiet and relaxation, but also excitement and joy.

"I forget about a lot of things that are going on around me or in the world when I'm creating and then I want other people to be able to see it and feel it too."

Beginning with an idea or vision, Ms O'Meehan said she simple starts creating and sees what happens.

The vision for the piece may change along the way.

"Sometimes I end up with something that isn't going to work for the space, but I end up using it somewhere else, or I have to keep working on it to make it work," she said.

"In fact, quite often with an installation I am making the separate parts away from the space and then half of the artwork doesn't happen until I get to the space and install it.

"Then I need to deal with any problems that arise or if the space looks a bit different to what I thought.

"The trick is making it all fit once I get there, because it's not just like hanging a piece of art on the wall, I need the space and time to make the art onsite, which is fun and exciting.

"It comes alive once I'm actually in the space and putting it together."

One of Ms O'Meehan's favourite aspects of creating art is seeing how people react or interpret her work.

"That's the biggest buzz, because then I know that I've made a connection or provided something for them to make a connection with," she said.

"I see installation art as providing an immersive experience so people can be within an installation and it just changes the space."