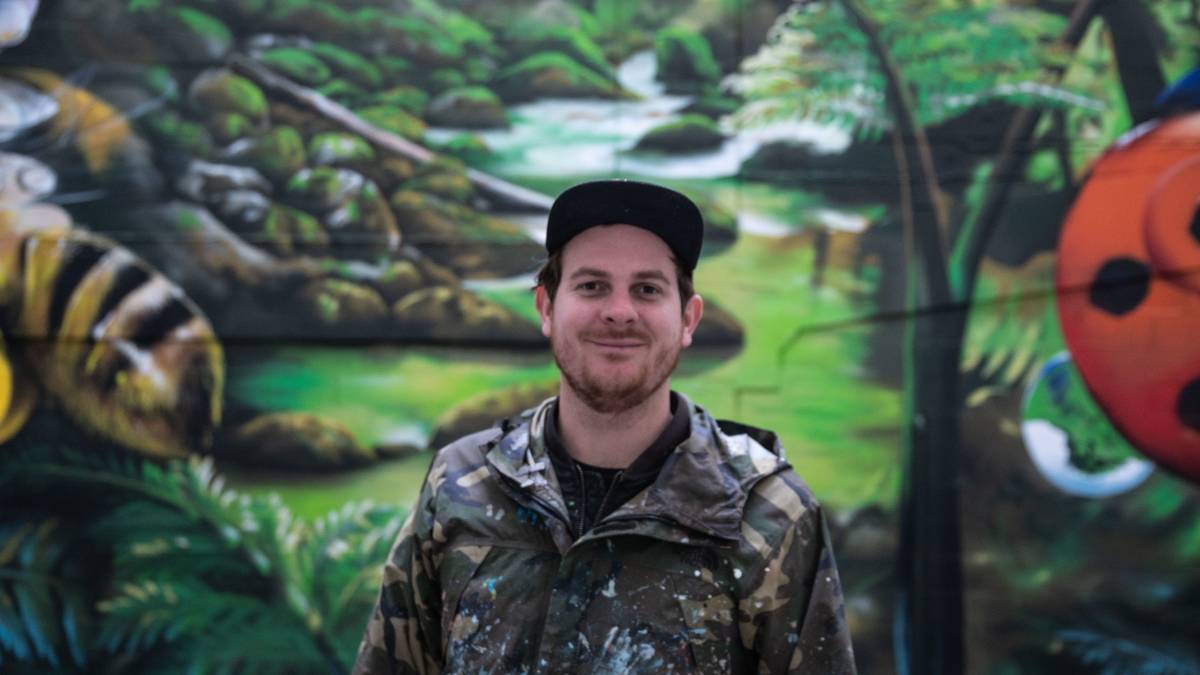 Mural artist Jerome Davenport has spent the past eight years working full-time on his creations.

WHEN COVID-19 hit last year, among the innumerable events to be cancelled was the much-anticipated annual Waroona Agricultural Show.

The show society and township was devastated - but it planted the seed for an idea - a community project which will mark the town for generations to come.

Local businesses, the Waroona Shire, the agricultural society and farming families pitched in with funding, labour and supplies to create a 90-metre mural at the showgrounds to provide a larger-than-life record of the town's history.

An 'outdoor museum', the artwork reflects back moments from the shire's story and pioneering families to its proud community and is already drawing admiration from visitors to the town.

The mural, completed in August, is by in-demand, Perth-based mural artist Jerome Davenport, who hails from a family wheat and sheep farm at Wickepin and often finds inspiration in the country scenes of his childhood. 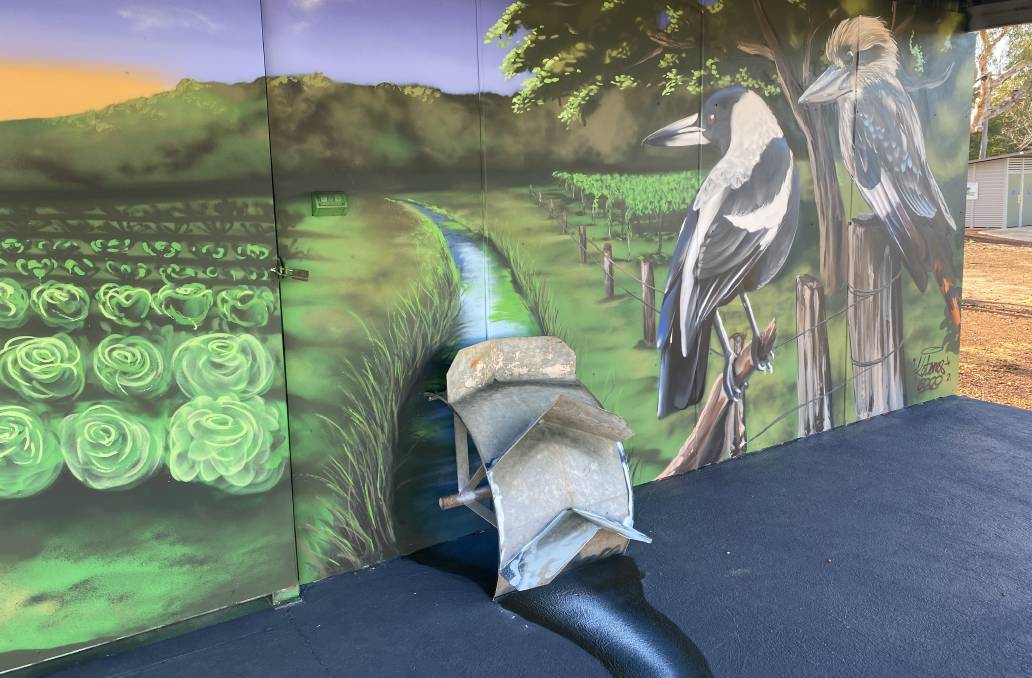 Part of the new mural Mr Davenport painted at the Waroona Showgrounds. Local businesses and the community pitched in to help with funding and with some of the fabricated elements. Photos supplied by the Waroona Agricultural Society and Jerome Davenport.

"I think it is just really important to give back to these rural communities and if you can, go back and brighten up these small towns,'' said Mr Davenport, who also paints as Ketones6000.

"They are the backbone of Australia but they can struggle to hold the population these days and so many beautiful aspects just get lost.

"People don't understand until they get out there.

"These murals offer a drawcard... as you see all around Australia now - mural trails are giving people an opportunity to get out and about."

The Waroona mural is one of Mr Davenport's most recent works, others can be found in the Wheatbelt, Great Southern, Bunbury, Collie and in Perth. Long-serving Waroona Agricultural Society member John Marchetti in front of the pavilion that bears his name. Mr Davenport said he loves painting people and is often inspired by their stories.

He is currently in Kellerberrin working on a 250 square metre mural to celebrate the 100th anniversary of its agriculture society and show and recently completed a series of works on water tanks in Gnowangerup, as part of the Great Southern's new Horsepower Highway.

In Perth, his portrait of businesswoman and philanthropist Mary Raine adorns the prominent Raine's Square building on Murray St and his street pianos are back at Brookfield Place.

A self-taught painter, Mr Davenport came to mural making via a degree in live theatre building at the WA Academy of Performing Arts, which involved creating backdrops and props for ballet, opera and theatre.

He dipped a toe into mural painting 16 years ago and has been working in the field full-time for the past eight years - setting up an Australian-British business called Blank Walls which facilitates murals and painted advertising for private, commercial and residential clients.

"I started painting a few murals from a bit of a background in graffiti or painting words,'' Mr Davenport said.

"That stepped up into doing more and more portraits and pictures of things like natives animals.'

"And that expanded to become a full-time business." 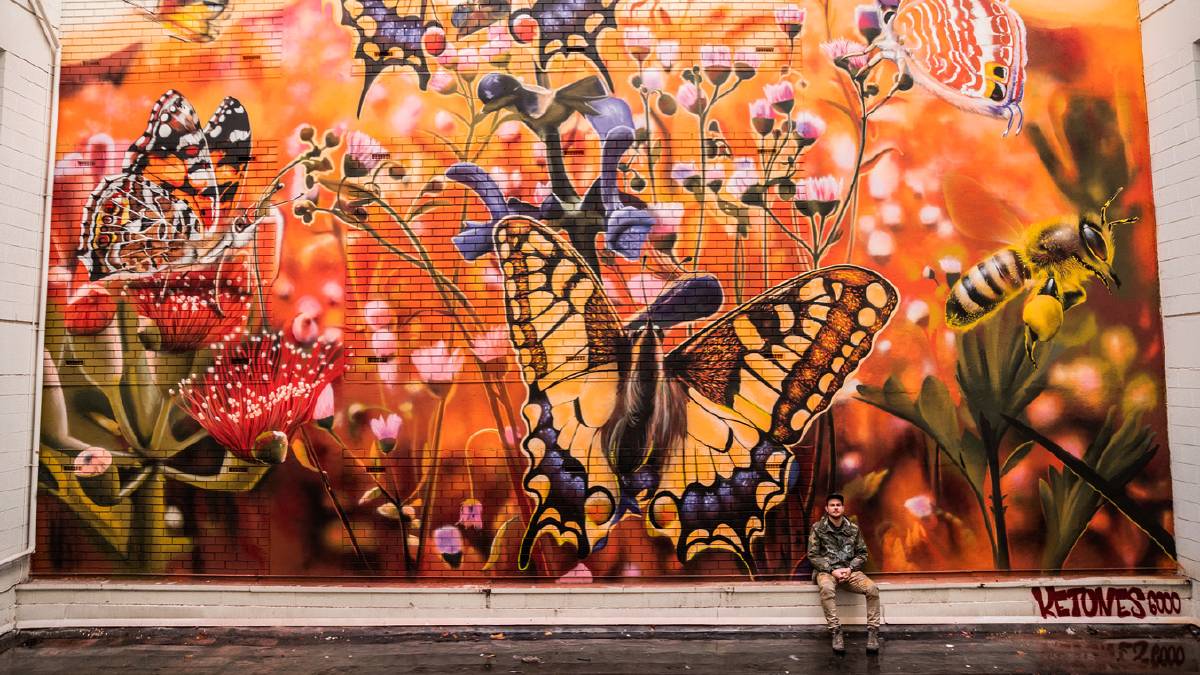 Mr Jerome's colourful murals are found in Perth, the Great Southern, the Wheatbelt and overseas.

"We are very passionate about giving young artists the opportunity to get into the scene,'' he said.

"We help facilitate their projects for them, give them the creative freedom to be able to do their work and show them the process.

"When I started out I never had anyone I could turn to that I could ask these questions.

"We give young artists that opportunity to nurture them and help them come up as well."

The process of creating the murals generally takes about a year from an initial conversation to concept building and installation and about two weeks to a month to paint using aerosols. It takes Mr Jerome two weeks to a month on average to paint a mural. The concept is created on a computer and the final design is drawn on the wall with paint pens or chalk. Upscaling the work can be difficult, but there are tricks to the trade.

Mr Davenport generally creates designs on a computer from a collage of about 50 photographs, which is upscaled and Photoshopped onto the chosen feature wall so people can understand what the finished product will look like.

Before the spray cans come out, he sketches the final design on the wall using paint pens or charcoal.

Upscaling the work can present challenges - though there are tricks of the trade.

"It just takes a lot of practise and I am still learning,'' he said.

"I don't tend to paint the same thing twice- so that is a bit of a challenge.

"At the moment I am painting a marching band with trombones.

Though the subject is varied, there is a stylistic consistency through his work - which blurs the lines between graffiti, muralism and naturalism with lots of colour and loads of energy.

It has seen him awarded a Black Swan Portrait award and invitations to paint for art festivals around Europe and North America.

Though grounded in Australia during the pandemic, Mr Davenport said he has never been busier.

Commercial work and commissions from community groups, such as the agricultural societies, and local shires is pumping to the point more work is on offer than he can complete - though he will always be on the hunt for more big silos to adorn.

"Since COVID business has gone mental, we find it hard to keep up,'' he said.

"I guess because we are locked within our State, people are spending money here.

"People have sat at home for weeks and months, literally staring at a blank space and they go 'I want some artwork on that wall'.

"They see the potential.

"And there are not so many touring acts, so local governments are really putting a focus on the arts and making a lot of grants available for communities, especially for mental health and art, so it has been quite beneficial.''

That was certainly how the Waroona project tied in - the Waroona Agricultural Society had fully expected to be holding its 90th annual show in October last year and from February preparations had been in full swing.

But when it became obvious they could no longer proceed with the event, its main sponsors, Aloca of Australia and Premium Allsands/Premium Waste Management, agreed to instead put their funding towards a mural on one of the older sheds at the showgrounds.

The Agricultural Society and Harvey Water chipped in and, when an application for arts funding was unsuccessful, the local community dipped into their own pockets to help out, while local businesses provided post 'n' rail and paint and fabricated elements for the artwork.

The project quickly grew in scale from a large farming mural on the old John Marchetti shed to a series across two buildings incorporating all manner of local historical and farming scenes, plus elements acknowledging local farming families contributions to the project.

The final piece, on the Walmsley Pavilion, commemorates the role of local pioneers Raywood and Myrtle Walmsley and their families, which was funded by their grandchildren.

"We developed a concept for two sheds and four different murals, each one has its own subject,'' Mr Davenport said of the project.

"Some relate to the farming heritage of the local area, some relate to the different industries, the backbone of that area, one is around the history of the town, the last section is the commemorative piece to the Walmsley family."

For inspiration for many of his country pieces, Mr Davenport turns to the local historical archives - but he also looks to nature and the natural environment.

"I love to dig through historical archives and old photos,'' he said.

"It is great finding those classic old photos, like kids back in the day and old farmers.

"It is really eye-opening to see that little glimpse of history.

"I do love the historical element to see where the communities came from and who built them and just those stories - they are the backbone of farming and rural life.

"But then there are also the more modern pieces, where I interview people and take their photos for the artwork - you take their story and understand why they are being celebrated.

"I think that is quite crucial.

"Mostly people inspire me - I love painting people and celebrating them but I am also passionate about wildlife and native flora and fauna which I think should be held in high regard and looked after and cared for, for our future generations."