Ranger Red with a Tawny Frogmouth. 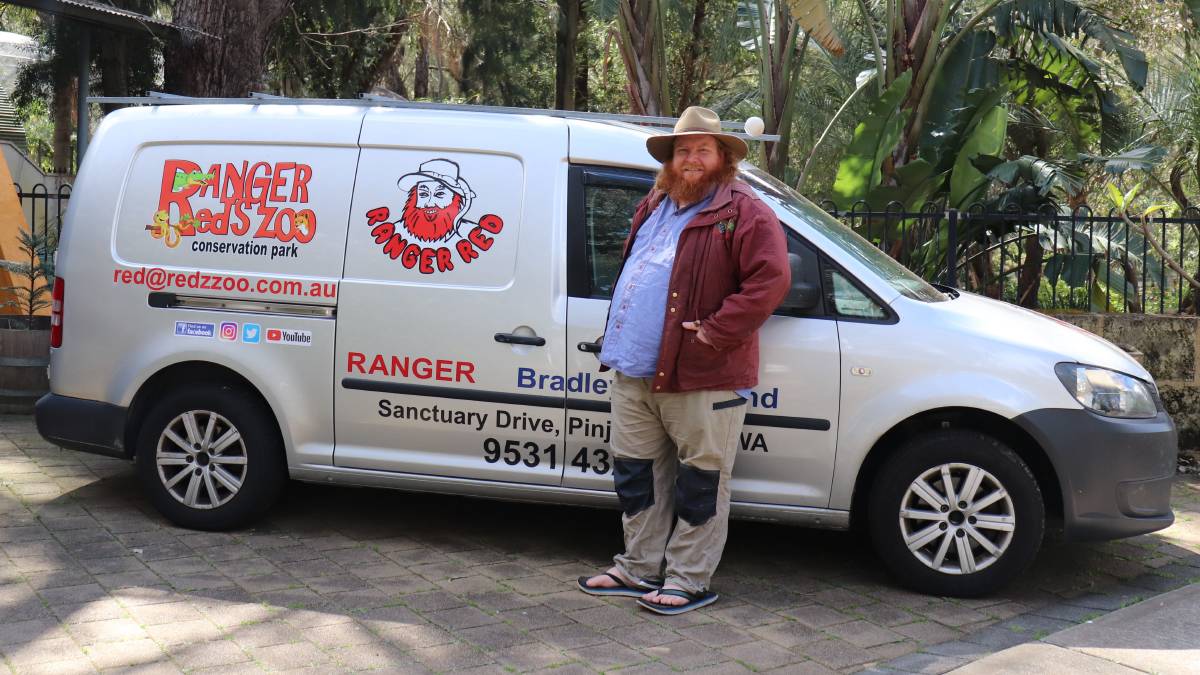 ONLY A few months after accomplishing his childhood dream of owning a zoo, Bradley Holland, more famously known as Ranger Red, had to close his business to the public due to the COVID-19 pandemic.

After conducting a walk through of the premises to gauge the sort of work and money that would need to be invested, Mr Holland purchased Peel Zoo in September, 2019 with his silent business partner Peter Mascaro and renamed it Ranger Red's Zoo and Conservation Park.

Ecstatic to have finally made his pipe dream a reality, Mr Holland's happiness was temporarily put on hold when he realised the zoo would have to close its doors for an unknown amount of time when the pandemic first hit Australian shores in March 2020.

"It was really scary because we were relying on people coming to the zoo," Mr Holland said.

"There were a few things we were aiming to do straight away, including building crocodile enclosures and a reptile display in the form of a mini reptile house, but when COVID hit it meant all spending had to stop.

"Everything we did maintenance wise - we had to budget for it, because we didn't know when we would be able to reopen."

A glass half full type of person, Mr Holland made the best out of a bad situation, using the forced closure as an opportunity to complete maintenance projects and spruce the place up.

Fortunately, not too long after, the zoo was able to re-open its doors and visitors were once again able to enjoy hands-on experiences with the animals, which seems to be a major highlight and point of difference for visitors.

On the weekends and during school holidays, the zoo runs a program from 10am-3pm which includes snake and lizard interactions, cuddles with the Rufous Bettongs and the opportunity to meet and touch the ferrets and Tawny Frogmouths.

Visitors can also take part in bird feeding in the walk-in bird aviary and the zoo has three permanent petting areas where you can pet and feed red deer, alpacas, ostriches, emus, sheep, goats and western grey kangaroos.

Outside of the weekends and school holidays, the zoo's volunteers and staff regularly jump into the animal enclosures to allow more animal-human interactions to occur.

Mr Holland said the koala, wombats and the snake (because of the holding aspect) tended to be the most popular animals for visitors. 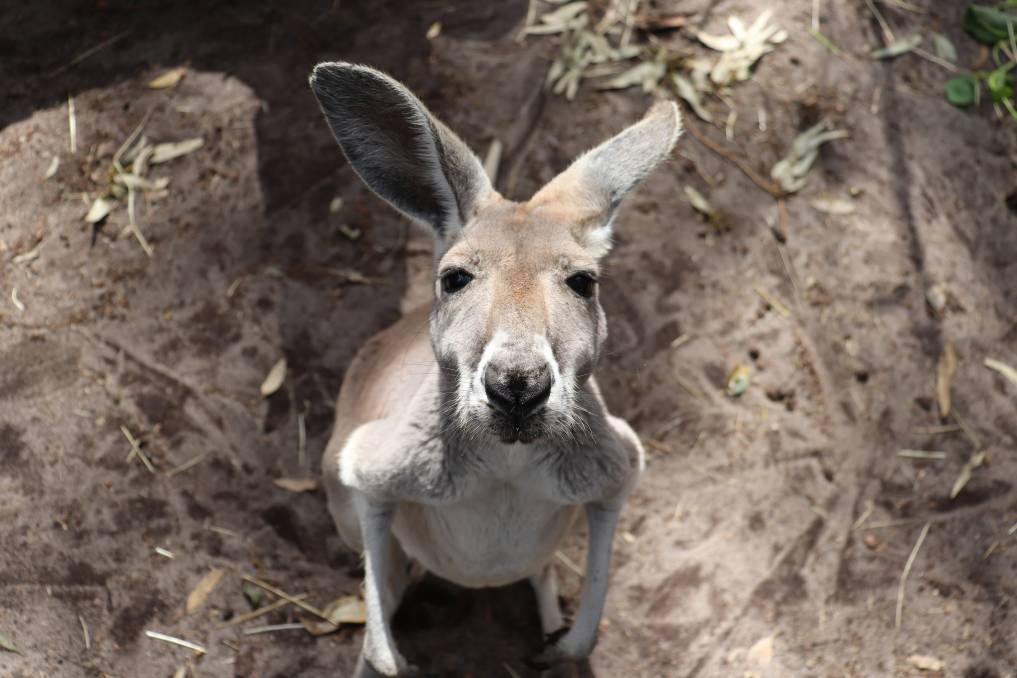 "A lot of people are disappointed when they realise we don't do wombat handling here, but there aren't actually many places that offer that, as wombats can be extremely dangerous," Mr Holland said.

One of the zoo's most popular programs is 'Zoo Keeper for A Day', where students get to shadow a zoo keeper, getting up close with the zoo's dingos and gliders, as well as learning how to feed the animals.

Students also receive a hat and are provided with lunch as part of the program, which can be booked online, with the zoo requiring a minimum participation of two students for it to run.

With 750 animals calling Red's Zoo home, its marsupials include wombats, koalas, quolls, possums, gliders and bettongs, while its ungulates (hooved animals) include deer, sheep and goats and its reptiles include both venomous and non-venomous snakes, as well as a range of lizards.

Red's Zoo also has two species of both turtles and frogs and bird wise there is everything from small finches and softbills through to cockatoos and parrots.

Most of its animals are sought by trading with other animal and wildlife parks, with a smaller portion bought or allocated to the zoo by the Zoo and Aquarium Association (ZAA). Red's Zoo is part of a Tasmanian Devil breeding program.

Mr Holland said his favourite aspect of the job was not only getting to work with animals and seeing the joy they bring to people, but also helping people to deal with their phobias around certain animals.

"We all think of people having fears of snakes, but there is also a huge amount of people who have frog and bird phobias," Mr Holland said.

"Birds are an interesting one, because you tend to get two different age groups - you get young people who have been swooped by a magpie, while older people they tend to have been attacked by a rooster or a goose in the days when it was common for families to keep chickens and birds at home."

Raised in Perth, two years into his apprenticeship as a chef, at 18 Mr Holland moved to a property in Gladesville, New South Wales, that was owned by Harry Carr.

Located 20 minutes from the heart of Sydney, Mr Holland spent the next 14 years at the property, which incorporated a private zoo that had several species of birds, mammals, and reptiles. Kristian and Angela Barlow with their son Ryan, Madora Bay, feeding the emus at Red's Zoo.

Despite never directly working at the zoo, Mr Holland said the experience furthered fuelled his passion for animals and sparked him becoming involved in a number of wildlife parks and zoos, president of a number of aviculture societies and a member of marsupial, herpetological and primate associations.

While working at restaurants in Sydney, a flexible roster allowed Mr Holland to pursue his passion for the performing arts as well as help out a friend who ran a mobile zoo.

Having attended classes and workshops at the Australian Theatre for Young People and also volunteered for the organisation, Mr Holland scored an animal segment on Kerri-Anne Kennerley's television show, where he showcased animals from his friends mobile zoo.

However when his mother fell ill in 2010, Mr Holland made the decision to return to Perth to be closer to her.

It was then that he started his own mobile business, Red's Roving Australian Wildlife Displays, which combined his love for animals and theatre.

Incorporating a lot of storytelling and performing, Mr Holland travelled all over WA with his mobile wildlife display for about 10 years, to educate people about different Australian animal species. "I knew there were the 'Birds of Prey' and snake displays, but there wasn't anything with a full Australian range of animals when I first started my business," Mr Holland said.

"However I quickly realised why, as our licensing laws are very different to the way things run over east.

"In Sydney we were using a crocodile, a flying fox, a bird called a Tawny Frogmouth as well as reptiles, but the laws are a lot stricter over here."

Mr Holland said the difference in restrictions from the east coast also extended to our zoos.

"My friends that have zoos and wildlife parks on the east coast have primates and big cats like lions, but none of that is allowed to be kept here," Mr Holland said.

Despite this, Mr Holland said the State government was supportive of Western Australia having its own free range zoo, and that he hoped to, one day, be able to meet their requirements so that he could provide the public with access to more types of animals.

Acknowledging that running the zoo was essentially a 24/7 job, Mr Holland said if he ever took a day off, it was usually because he had a funeral to go to.

Luckily though he said he loves his job, his staff and the volunteers.

"And if you find a job you love, you will never work a day in your life."