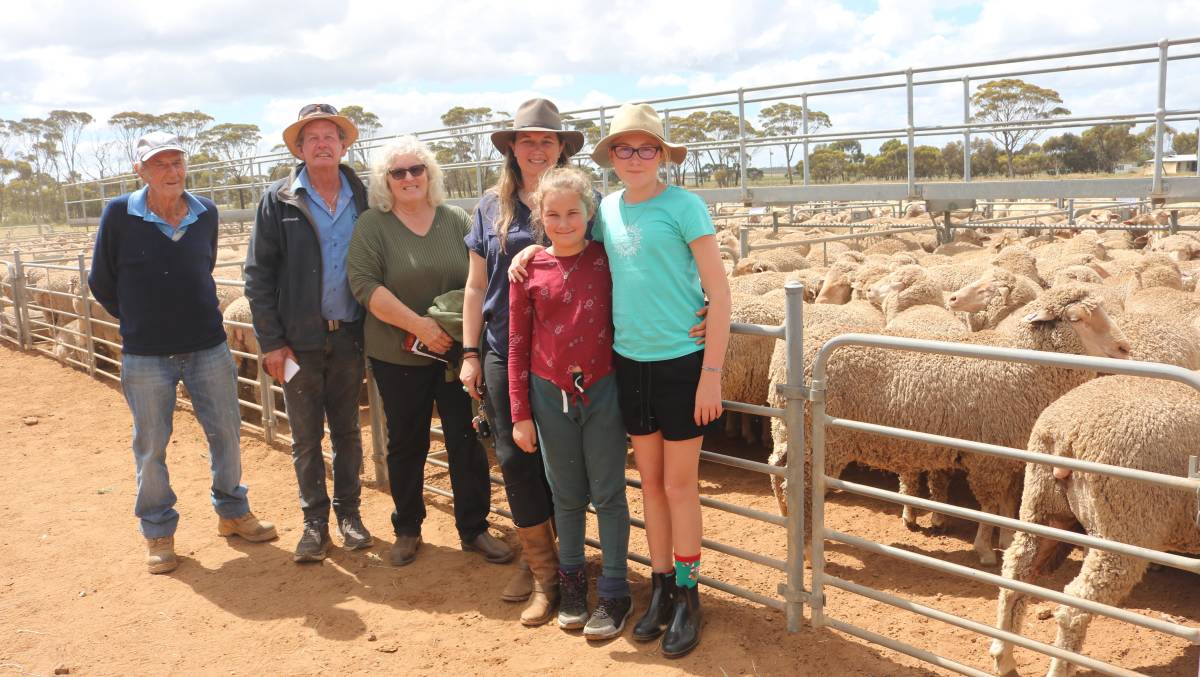 Vendor Vern Brown (left), VS & J Brown, Hyden, proudly stands beside Westcoast Wool & Livestock Kulin agent Barry Gangell, after selling his pen of 214 1.5yo Merino ewes for a sale top of $282 when Marion Price, Prices Contracting, Jitarning, pursued the line. With them is Marion's daughter Alicen Johnson and her granddaughters Ebony (9) and Kacey (12) Johnson, Mandurah.

BULK buyers fronted up to the Back to the Wheatbelt sheep sale held by the Westcoast Wool & Livestock team last week, the first of its kind for the 2021 season.

With an excellent yarding of Merino ewes and lambs on offer at both the Kondinin and Corrigin sheep yards, prices rarely dipped below the $200 mark as every single one of the 8262 ewes and lambs were pursued with fervour by 36 registered buyers.

A wet winter in the Wheatbelt area has produced plentiful feed for many sheep farmers and it showed, with Westcoast Wool & Livestock penning one of the best yardings of prime condition Merino ewes in years.

Prices were up across the board on last year's sale, with demand coming from both local and interstate buyers with the assistance of the AuctionsPlus system.

However, it was a local buyer who paid the $282 sale top price for a standout line of 1.5 year old Merino ewes, offered by Vern Brown, VS & J Brown, Hyden, within the Kondinin pens, the first stop of the two-town sale. An excellent line of 469 1.5yo Merino ewe hoggets offered by Helen (left), Glenn and Mitchell King, Kulin, topped the Corrigin section of the sale at $262 after they were purchased by Westcoast Wool & Livestock York agent Mark Fairclough (not pictured). Mr Fairclough purchased the ewes on behalf of Tristan O'Brien, Jennacubbine. With the King family is Westcoast Wool & Livestock Kulin agent Barry Gangell and auctioneer Chris Hartley.

A dynamic team of ladies were the force behind the $282 top bid, as Marion Price, Prices Contracting, Jitarning, her daughter Alicen Johnson and two granddaughters Ebony and Kacey Johnson, all liked the look of the ewes with the most wool on them.

The pen of 214 January shorn ewes had 10 months' worth of wool prime for the picking, and Ms Price said that was the main driving factor behind securing the line of females, as it fits perfectly with their upcoming November shearing.

It was also the Kolindale bloodline that was a bonus, as their existing flock consists of similar genetics and build.

Marion and Barry Price returned to farming in 2015 after 30 years in the shed building industry, when they purchased part of Barry's original family farm at Jitarning, near Kulin, and are currently in the process of building a Merino flock.

There were plenty of other lines of 1.5yo ewes on offer in the Kondinin section of the sale, and buyers showed they were willing to pay for quality breeders, including Westcoast Wool & Livestock York agent Mark Fairclough.

Mr Fairclough kicked the Kondinin sale off by purchasing the first line of 503 1.5yo July shorn ewes of Ronern blood for $270, which was offered by regular vendor R Dunwell & Son. Kulin farmer Michael Lucchesi (left) and his son Ben (7) caught up with Beau Repacholi, Careema Farms, Kondinin, while also on the lookout for some quality Merino ewes at the Westcoast Wool & Livestock Livestock sheep sale recently.

He went on to purchase 174 1.5yo August shorn ewes of Kolindale blood, offered by AW & AP Latham, for $234, before finishing the Kondinin section by securing 315 wether lambs of the same shearing, bloodline and vendor for $138.

Arriving at the Corrigin sheep yards, it soon became clear Mr Fairclough hadn't yet fulfilled his various orders, as he purchased three lines of 1.5yo ewes in quick succession.

The first was offered by G King & Son, Kulin, which presented a very even line of 469 1.5yo September shorn ewe hoggets, of Ronern blood, which topped the Corrigin section of the sale at $262.

They were purchased on behalf of client Tristan O'Brien, Jennacubbine, who runs 4500 Merino breeders joined to Poll Dorset rams to produce a first cross lamb.

"They are good, solid, sturdy sheep and we have purchased from the King family before, so we know they're robust," Mr Fairclough said.

"We know they do well when they're joined with a terminal sire."

Mr Fairclough quickly followed the top line with two more lines of 1.5yo ewes offered by another two Kulin producers, purchasing 481 September shorn females of Lewisdale blood from LC & CJ Tyson for $236 on behalf of a different client. He finished his spending spree with 200 September shorn ewe hoggets of Quailerup blood offered by 86 Gate Farms for $252, securing valuable lines for his clients in the York and Quairading areas.

Another volume buyer of 1.5yo ewes was Westcoast Wool & Livestock Brookton representative Stephen Keatley, who paid a top of $256 for three lines of ewes totalling 422 head on behalf of Cluett & Sons, Brookton.

A notable flock dispersal under the account of Watervalley Farms attracted much interest in the Corrigin section, first offering 218 2.5yo ewes of Rutherglen blood and shorn in September, purchased by Altek Farms, Muntadgin for $252.

The first line of 215 females offered by EH Tomsic, June shorn with Kolindale blood, were knocked down to the Zweck family for $252, immediately followed by 195 ewes from MK Mouritz of the same bloodline but September shorn for $250.

A buyer from Wandering also made full use of the AuctionsPlus system and purchased a line of 658 August shorn wether lambs of Kolindale blood, one of two lines of wethers offered by AW & AP Latham, for $151.