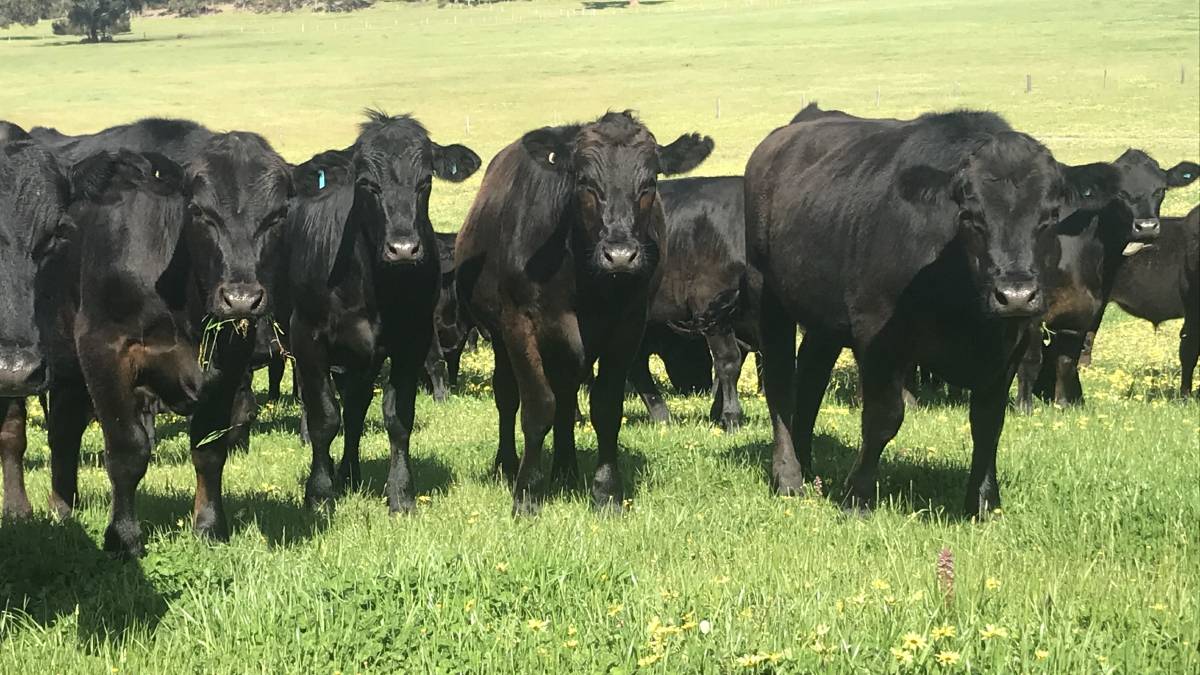 Ryeland Dairy, Boyanup, has nominated 14 Angus-Friesian steers and 30 Friesian steers all in the 14-16-month-old age bracket for the Elders Boyanup store sale on this Friday, October 15.

PRODUCERS looking for store cattle should look no further than this month's Elders Boyanup store sale.

In the sale this Friday, October 15, the Elders South West team will yard 1400 head which will suit a range of different buyers from lotfeeders and grass fatteners to backgrounders.

The yarding will include a good run of beef steers and heifers which will range in age from eight to 20 months, plus a quality line-up of Friesian steers and first-cross steers ranging from four to 26-months-old.

"We have a big line-up of beef steers and heifers which have been especially reserved for this sale and ideally suitable as replacements to grow out on grain or pasture," Mr Carroll said.

"The dairy steers are from owner-bred or regular reputable store sale vendors and range in age from young poddies up to two-year-olds and will suit any operation to further grow out."

One of the biggest vendors in the beef pens will be the Cowcher family, MA, GD & BA Cowcher, Quindanning, when they truck in 70 Angus steers and 25 Angus heifers.

The owner-bred line is based on Monterey and Blackrock Angus bloodlines and are in the 12 to 14mo age range.

Elders, Williams agent Graeme Alexander said the steers and heifers on offer from the Cowchers were in good forward store condition.

LJ & KD Little will also bring in cattle from Quindanning and have nominated 30 steers and 12 heifers aged 14-16 months.

They are sired by Willandra Red Angus bulls and out of mainly Murray Grey females.

Mr Alexander said both steers and the heifers from the Littles would be in the 400-440kg and wouldn't take much finishing.

Another big line to be offered in the beef pens will be 74 Charolais cross steers from Hayes Farm, Capel.

Waroona-based Alba Farms will offer three different lines of steers in the sale which are all out of Murray Grey females and aged 10-12 months.

There will be 10 sired by a Speckle Park sire, 10 by aCharolais bull and 10 by an Angus.

Elders, Waroona representative Wade Krawczyk, said the steers from Alba Farms were purchased in as weaners in April/May and have been grown out on good pastures.

The steers will weigh from 400-440kg and they have all had the relevant health treatments.

Other bigger lines in the beef offering will come from Valley View Grazing, Kudardup, which will truck in 20 Angus-Murray Grey cross steers weighing 420-460kg while S Payne, Busselton, has nominated 30 Murray Grey heifers which will weigh between 460-500kg and RG & N Gibbs, Ferguson, will present 22 Angus heifers in the 360-380kg weight range.

Along with the quality lines of beef cattle on offer there will also be some top lines of Friesian steers and first-cross steers as well as from regular vendors.

One of the biggest vendors in these pens will be Ryeland Dairy, Boyanup, which has nominated 14 Angus-Friesian steers and 30 Friesian steers all in the 14-16mo age bracket.

Elders, Boyanup representative Alex Roberts said the steers on offer from the operation were a mix of owner-bred and purchased cattle.

"The Angus-Friesians will weigh from 350-400kg and are in fresh, forward store condition and showing the signs of the good season," Mr Roberts said.

"The Friesian steers will be similar to the Angus-Friesian and are ready to go out in the paddock and grow."

Also offering numbers in the Friesian steers lanes will be regular vendor Dudinalup Pastoral Co, Nannup, which has nominated 30 black and white steers in the 22-24mo age range.

Elders, Nannup agent Terry Tarbotton said the steers were purchased in as poddies and have been grown out by the Nannup operation.

"They are in forward condition and will weigh from 520-580kg," Mr Tarbotton said.

At the other end of the age scale monthly vendors Negus Enterprises, Tutunup, will offer 25 steers, while

This line of steers from Negus Enterprises is owner-bred and aged 4-6mo, while the Olsthoorn steers are 8-10mo and were purchased in from Elders' calf sales.