THE Cheeryna on-property Suffolk and White Suffolk sale proved to be a buoyant event for the black-faced breed with clients pitching in to clear a bigger offering and sending prices to a $2400 top at Williams last month.

The $2400 top price was the icing on the cake with the ram destined to be a new sire in Tarryn Gray's Tarlinga stud at Kirup.

Elders stud stock prime lamb specialist Michael O'Neill had recognised the stud qualities in its length, muscle and good square back end, neat head and good figures during his pre-sale inspections and recommended the Pamellen 18/2017 son to her.

The ram was a twin with positive and negative figures in the right places giving it a 138.6 terminal carcase production (TCP) index of 138.6.

Like every Suffolk buyer in the shed she met with stiff competition from agents with sizeable buying orders that kept values aloft for the greater part of the sale.

It was bought by commercial producer Brian Hardie, Wandering, who bought only from the Suffolk offering and loaded eight for the trip home.

He also paid $1800 for a second high price Suffolk.

The sale was largely controlled by stock agents from three companies each with sizeable buying orders.

The first to prevail was Westcoast Wool & Livestock Williams agent Matt Tilby buying on behalf of Karl Argent and he wasted no time in picking out a line of the early rams.

He paid up to $1700 twice and got eight from within the first 20 pens to go under Elders auctioneer Graeme Curry's hammer.

Mr Tilby bought others for $1600 and $1500 (3) and was successful on two more to fill the 10-ram order when the heat had gone out of the market mid-way through the sale.

He operated throughout the sale getting seven rams for Wayne Duffield, Darkan, for up to $1400 and 12 rams on behalf of John McNamara, Westmere Grazing, Williams, bidding to a $1300 high three times.

Mr Spicer kept the pressure on during the middle stages of the sale spending up to $1400 twice as he invested in eight rams on behalf of PW & AM Lubke, Darkan

Nutrien Ag Solutions Williams representative Peter Moore also was in charge of two sets of buying instructions and operated mainly during the middle stages to get eight rams on behalf of Marradong Farms, Williams, for up to $1300 (2) before turning his attention to the White Suffolks to get a draft for Alex and Jamie Anderson, Glenorchy Grazing Co, Williams.

There were two other major buyers for the black faces and they were Shorelands Pastoral Co, Williams, which paid between $1200 and $1500 for eight rams.

Ms Lloyd said because of the number they needed they decided to return to Cheeryna because they were certain they would have the numbers rather than wait for their local breeders' sale.

"Also, we knew the quality would be here," Ms Lloyd said. 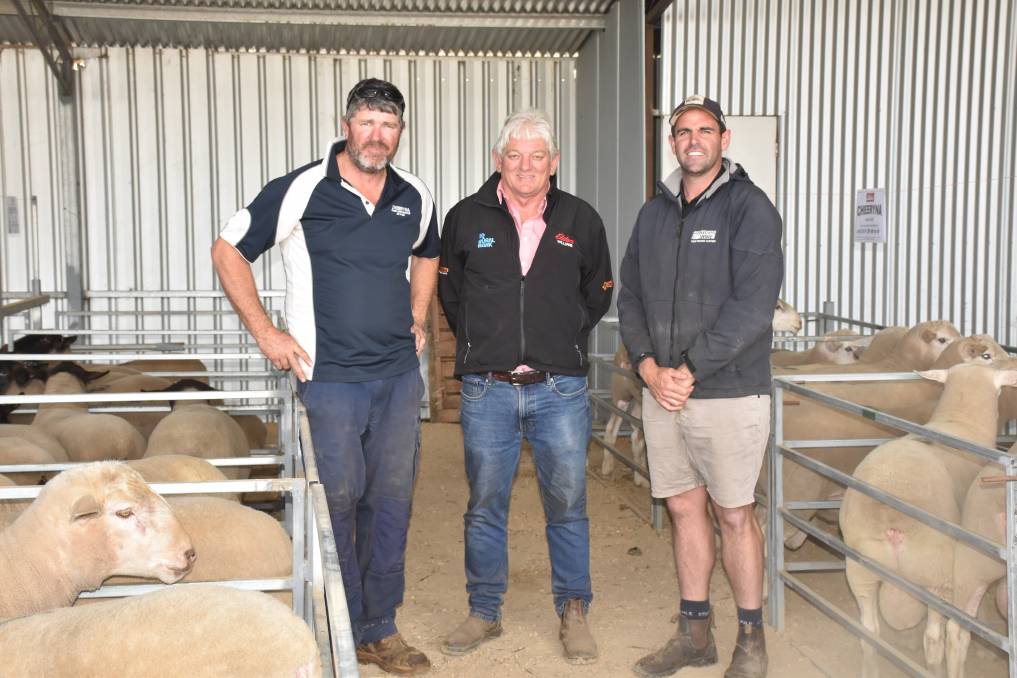 In contrast to the buoyancy of the Suffolks the 52 White Suffolks found the competition a little slower.

Mr Hogg, who runs a predominantly sheep enterprise, selected rams with an emphasis on eye muscle, fat and weaning weight figures to use in a flock producing about 1400 prime lambs for turn off next year.

This year Cheeryna presented 52 White Suffolk rams of which 37 sold under the hammer for a $907 average compared with 50 out of 52 selling last year for a $998 average.

Stud spokesman Robert Duff said there had been a noticeable resurgence of the Suffolk breed in the past couple of years.

"A few years ago White Suffolks were all the rage but it has turned around and it didn't help that there were a couple of (White Suffolk) clients missing today," Mr Duff said.

He said as a Suffolk stud that had been going since 1965 it had a wealth of consolidated genetics.

With many other Suffolk stud now dispersed he believed Cheeryna was now the biggest Suffolk stud in WA and probably the only one that could offer such a big number of even quality rams with well-respected genetics.

Mr Curry also said it was interesting to see in a wool focussed area that the black faces were enjoying such a good demand from a predominantly local clientele.

"Despite their large frame and the quality that was evident in the White Suffolks they failed to create the same local interest," Mr Curry said.

"The Suffolks had an even sale right throughout and people knew what they wanted to buy."