A government minister, a banker, a global food giant, WA's biggest grain exporter and a graingrower all shared their perspectives on the topic and what they thought the changing marketplace and evolving consumer expectations would mean for the State's graingrowers. 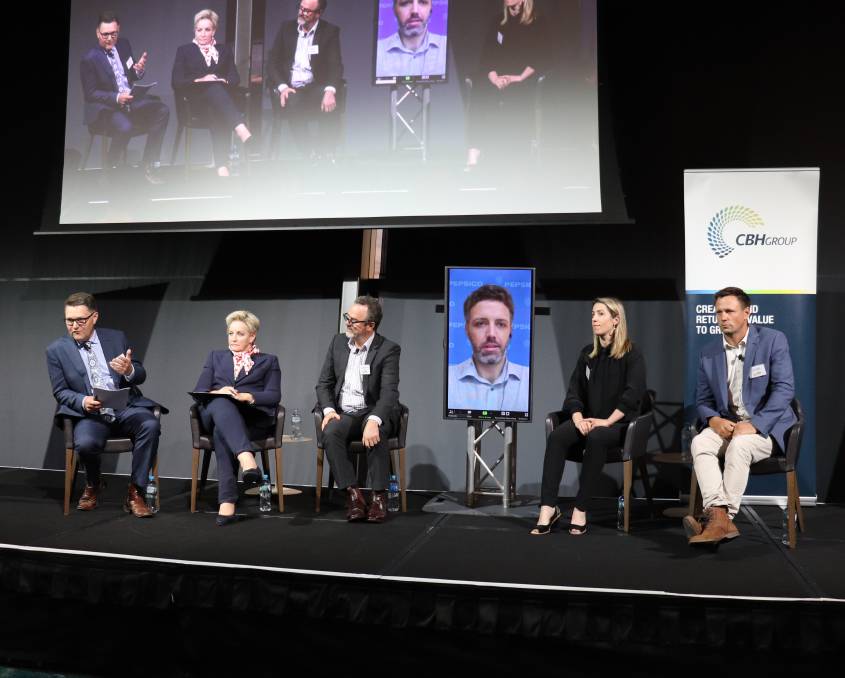 THE decision around the State's agricultural sector becoming sustainably managed is being made for us, and the industry needs to get on board or it will be left behind.

That was one of the main messages at the Grain Industry of Western Australia (GIWA) Forum, held at Optus Stadium last Wednesday night.

A government minister, a banker, a global food giant, WA's biggest grain exporter and a graingrower all shared their perspectives on the topic and what they thought the changing marketplace and evolving consumer expectations would mean for the State's graingrowers.

Agriculture and Food Minister Alannah MacTiernan addressed the packed room and opened the conference that more than 30 guests joined virtually, saying the issue of sustainability was not something that the industry would be able to deal with in a "shallow way".

"We are not going to be able to satisfy the desires of the market with a bit of green wash," Ms MacTiernan said.

"There is going to be a lot of challenges and a lot of debate in determining what is really going to cut the mustard in terms of the various hurdles that are being set by our markets and by our financiers.

Ms MacTiernan said financial institutions, superannuation funds and other big investors in agricultural land in Australia were developing complex assessments for the degree to which our agricultural practices were sustaining natural capital and the longevity of the farms themselves.

Rabobank head of sustainable business development Crawford Taylor highlighted some of the trends being witnessed in the grains market place, which included investors on a global scale wanting to know what sat behind the investments they made.

Mr Taylor said the European Union Carbon Border Adjustment Mechanism, which would put a carbon price on certain imports as early as next year, would create market issues for Australian graingrowers and highlighted that Australia's 'Top Four' banks, plus Macquarie Bank, were going through a climate change assessment, where the Australian Prudential Regulation Authority (APRA) had listed a number of criteria and was requesting to know the impact of climate change on the performance of their loan portfolios.

"In addition to that, what we see is a common mechanism in all leading financial institutions and companies globally about reporting on their climate related financial disclosures, so this is starting to get very real about what we must do," Mr Taylor said.

Looking forward he said major corporations and banks would not only be required to not only make climate-related financial disclosures, but also make nature related disclosures.

"Underway at the moment is the taskforce for nature related financial disclosures, so this is where we start stepping into the world of natural capital," Mr Crawford said.

With most of the countries that Australia exports its grains to having made a commitment to be greenhouse gas (GHG) neutral by 2050 (excluding China who has set 2060 as its target), Mr Taylor said these commitments would have a definitive impact on Australia's supply chains.

While Australia has made a commitment to reduce its own emissions under the Paris Climate Accord to 28 to 26 per cent below 2005 levels by 2030, he said Australia was still waiting for the Federal government to establish a clear position in regards to its commitment for our country's climate change and sustainability goals.

His presentation also highlighted that the trend was definitively up in terms of global companies making GHG commitments within their supply chains.

Speaking to the GIWA Forum in a pre-recorded presentation, PepsiCo sustainable agriculture manager Reuben Blackie said the company, which spends about $7 billion US annually, was very reliant on agriculture, using more than 200 crops that cover almost three million hectares of farmland in its production processes.

Having recently released a new sustainability policy, 'PepsiCo Positive' in September, Mr Blackie said PepsiCo viewed sustainability as an opportunity for the agricultural sector to maximise its yields, the quality of its produce and to also help offset some of the inflation volatility seen in the world markets.

Since 2015 the company made a commitment to sustainably source 100 per cent of its key ingredients, with the PepsiCo's growers verified by the company's internal sustainable farming program.

However PepsiCo made two new commitments as part of its new sustainability program, 'PepsiCo Positive' that was introduced in September, which were spreading the adoption of 'regenerative farming' practices across its properties and ensuring that their growers practices are beneficial to the livelihoods of the farm workers, the farmers themselves and their communities.

While PepsiCo has not made a commitment to pay a premium to farmers who are transitioning or have already transitioned into more sustainable farming practices, Mr Blackie said the company was happy to support farmer investments that centred on trialling sustainable or regenerative practices.

"In our view, the regenerative practices that we're asking for need to add value on their own - it has to be something that the growers see a value in implementing, not just the growers that have a connection to a specific buyer or a specific market," Mr Blackie said.

When asked about which regenerative practices PepsiCo wished to see its growers utilising, Mr Blackie said he wanted to avoid talking about specific practices.

"At this stage our objective is to work with the industry to understand what the growers are interested in - so what are the practices that add value to the industry and are relevant to the WA agricultural systems," Mr Blackie said.

However Mr Blackie said an interesting and popular regenerative agricultural practice that had come to the companies attention included soil organic matter.

"We have seen a lot of different approaches to improving that and considering what it means and it could be really interesting to look at something like that in WA," he said.

"We do have a third party verifier that comes down, independent of PepsiCo, and visits the farmers and our sampling bases, but not every farmer in the supply chain," Mr Blackie said.

"We take a representative sample when we do those visits which are on a three-year cycle.

"We see a differentiation between certification and verification.

"What we ask of our verifiers is that they take our best case, a presumption that the farmer is doing what we would like them to do."

Unlike many sustainability certification schemes that rely heavily on documentation as proof of the application of their programs, Mr Blackie said PepsiCo's verification process recognised that farmers' time was better spent in the field than in the office filling in documents.

"There is some documentation that we require, of course, but the job of the verifier is really to try to understand that the farmer has a clear understanding and application and intention of applying those practices and not that they've written it all down," he said.

"We want our relationship with the growers to be a partnership built on trust - we want to be a trusted buyer, and we also need to reflect trust in the growers as well."

He said the costs of PepsiCo's verification processes also weren't passed onto the grower.

Well known grower from the Narrogin district, Ashley Wiese who had been GIWA's chairman for the past 12 months stepped down from the role at the GIWA forum in order to focus on his position as GIWA Oat Council chairman.