Lyndon Mickel will now lead the not-for-profit organisation into an interesting and challenging few years after having taken the reins from Highbury farmer Ashley Wiese who had been in the role for 12 months. 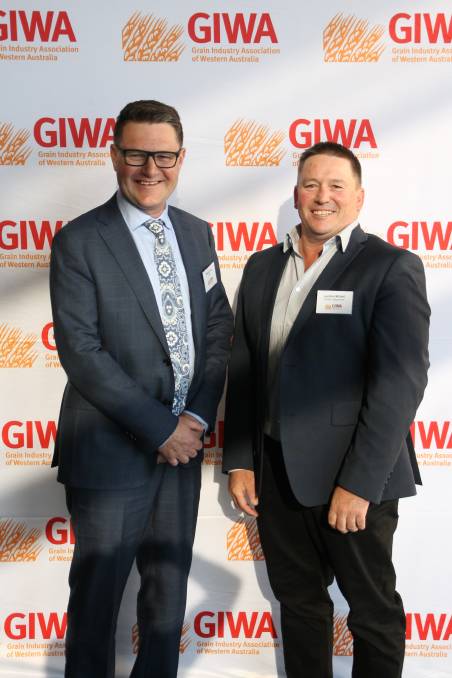 Beaumont grower Lyndon Mickel (right), has been elected as the new chairman of GIWA, replacing Highbury farmer Ashley Wiese (left), who had been in the role for 12 months.

A NEW farmer now sits at the helm of the Grain Industry Association of Western Australia (GIWA), with Beaumont grower Lyndon Mickel being elected chairman of the organisation at last week's annual general meeting (AGM).

Mr Mickel had been on the GIWA barley council since 2015 and been it's chairman since 2017, a role which he will continue in moving forward.

However, he will now also lead the not-for-profit organisation into an interesting and challenging few years after having taken the reins from Highbury farmer Ashley Wiese who had been in the role for 12 months.

Mr Mickel said becoming chairman of GIWA was not something he initially set out to do, but after six years on the barley council, it was the next progression for him,

"It's humbling and I'm very grateful that my peers on the GIWA board have seen fit to elect me into this position, which is a bit more of a challenge for me in terms of looking at the industry as a whole," Mr Mickel said.

"I find these sort of positions are the best way to have some input in order to make sure the voice from the ground is getting heard higher up.

"It also gives me a better understanding of the ins and outs of the industry so when issues do arise, I can have a look at things from both sides of the fence."

The next few years are set to be an interesting time for the grain sector across the country, with the industry consolidation into Grains Australia happening in the background.

"We want to make sure that progresses but at the same time that we don't lose our voice as the western region," Mr Mickel said.

"We're playing against some of the big agri-political groups who are looking at trying to get the likes of Grain Producers Australia and GrainGrowers all into one body, so it's about making sure we can work with them and get something into play in due course."

While that industry consolidation will be a priority for GIWA over the coming year, the initial focus for Mr Mickel will be on the immediate areas of concern that are impacting broadacre farmers in WA.

"The labour shortage is going to be an ongoing issue," he said.

"Most people have probably got their labour sorted for harvest, but there will still be an impact down the line at seeding next year and that impact will be dependent on how long border closures are going to be in place for, both Statewide and internationally."

On top of taking on the top job of the GIWA board, Mr Mickel will still be kept busy by the barley council of which he plans to stay as chairman for the next 12 months.

The main reason for that being there has been a fair change of personnel on the council, so his staying in the role which will allow for some stability over the next year, after which he will likely step down, but still maintain general representation on the council.

"I'm really proud of the way the barley council has gone about getting the malt barley rationalisation process nailed down," Mr Mickel said.

"When I took over from Steve Tilbrook, the previous chair, that process had just begun, so since stepping into the role we've been able to go through and get that process working with significant changes that have received great feedback right across the barley industry."

While Mr Wiese may have stepped down as chairman, he won't be leaving GIWA and plans to continue on as chairman of the oat council.

Mr Wiese's commitment to GIWA dates back to the organisation's inception - he became oat council chairman in 2018, prior to that he was deputy chairman from about October 2014 and has been on the oat council since the beginning, as he was the treasurer of the Western Oat Alliance in 2003, which rolled into GIWA when formed.

"He led us through some fairly big changes within GIWA in terms of executive officers and now it's a case of progressing forward to do the best for the industry as a whole."

At last week's AGM, other changes to the GIWA councils included Neil Wandel stepping down as pulse council chairman, with Steve Powles appointed to the role, while Michael Lamond stepped down as chairman of oilseeds and Peter Bostock stepped up.

Mr Wandel and Mr Lamond will both stay on their respective councils as representatives, while at the board level Neil Hooper stepped down as treasurer and Eamonn Lanagan from Byfields was announced as his replacement.