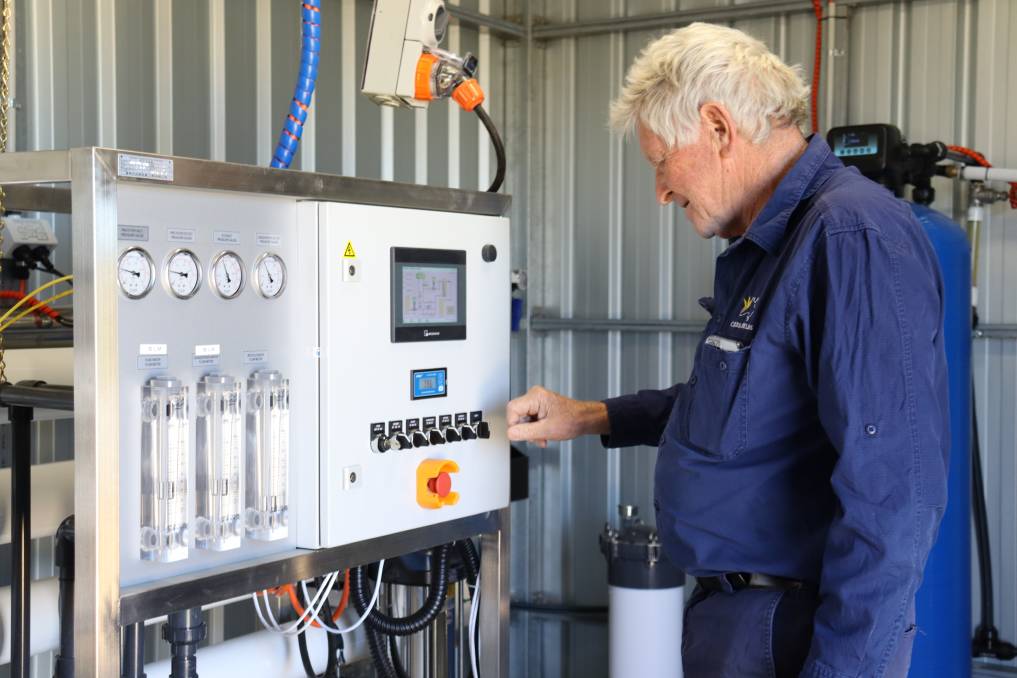 Robert Sewell, Wongan Hills, has been reaping the benefits of a self-sufficient water supply since 2019.

This season's widespread rainfall has not only helped fill dams and boost crop yields, but it has also provided farmers with an opportunity to plan for when the next big dry hits.

LOOKING around Western Australia, it is hard to imagine many agricultural regions were in grips of consecutive dry seasons last year.

This season's widespread rainfall has not only helped fill dams and boost crop yields, but it has also provided farmers with an opportunity to plan for when the next big dry hits.

So, is drought-proofing farmland - while driving productivity and profitability - a possible dream?

It has been for Wongan Hills broadacre farmer Robert Sewell, who has been reaping the benefits of a self-sufficient water supply since 2019.

And it has proved a worthwhile investment, reclaiming 30 hectares of salt-affected prime land with a return value far in excess of the plant's capital cost.

Not only that, Mr Sewell said there was "no problem" accessing 50,000 to 60,000 litres of water per day to run two spraying machines during the peak of season.

"And the softness of desalinated water and removal of other impurities has given remarkable improvement in the efficacy of chemicals and therefore the result of spraying."

The freshly filtered desalinated water tastes fresh, clean and pure, so it is hard to imagine it once had a high salt content and was sourced from underground.

But how does it all work?

"One bore is equipped with a solar driven pump and located 600 metres from the main tank and connected with a 40 millimetres poly pipe," Mr Sewell said.

"Another pump - driven by air - is 700m from the main storage tank.

"This pump uses the same 40mm pipe to feed water into the raw water tank.

"A 20mm poly airline delivers the air from an electric air compressor at the main plant.

"These two pumps can deliver about 3000L of raw salty water per hour during the day, but only around 2000L/hr during the night.

"A further air driven pump is located alongside the main plant and can deliver up to 3000L/hr into the raw water tank."

The raw water tank has a capacity of 60,000L and is monitored with an electronic level sensor, which Mr Sewell is able to check through a mobile phone app - anywhere and at any time.

"The tank has two float sensor switches, one which is activated if the tank's water level drops to 10 per cent of the capacity," he said.

"This will shutdown the desalination plant.

"Meanwhile, the second float switch works on the upper level of the tank.

"When the water level reaches about 85pc full, the air compressor, which drives the air pumps, shuts down and the solar pump continues during the day.

"The compressor restarts when the water level in the tank falls to 75pc capacity and the raw water is then delivered to the main shed housing the two plants."

As for the main desalination plant, water is drawn from the raw water tank by two 50mm poly lines into the main shed where two units are located. The raw water tank has a capacity of 60,000L and is monitored with an electronic level sensor, which Mr Sewell is able to check through a mobile phone application anywhere and at any time

Both have the same layout and follow the same process that is:

Recovery from the plant is 50pc, so the delivery pump must deliver twice the output of the plant.

Water is then run through a second filter containing a different medium known as Crystolite.

The main filters are fitted with computer operated top valves, which allow a programmed flushing and cleaning of the filters.

Mr Sewell said he set those to flush the first filter at 7am every day and the second filter at 7.30am every second day.

He said the programming can be varied in any combination of times, days or length of flush.

"The flushed water is delivered into the waste water line for discharge into an evaporation pond one kilometre further down the land profile in a degraded salt flat.

"The salt content of the discharge water is less than some water used for stock water."

Filters are replaced about three times a year.

At this stage, the water contains almost zero solids.

"The recovery rate in my plants is 50pc," Mr Sewell said.

"So, two litres of water is required to produce one litre of pure permeated water."

Mr Sewell monitors the flow rate of the units and the level of the pure tank by phone or computer. Water is drawn from the raw water tank by two 50 millimetre poly lines into the main shed where two units are located. This includes a smaller unit which can deliver 1300 litres of pure permeate water per hour and a larger unit, which can deliver 2600L/hr.

When the clean water tank level reaches about 75pc, a float switch activates a transfer pump.

That pumps 3000L of water per hour, three kilometres up to a tank on a hill, 40m head from the main plant.

"A flow sensor reads the output of this pump, so that monitoring can be done via the app on the phone," Mr Sewell said.

"When the level drops to around 20pc, the float switch will shut the transfer pump down.

"This tank is fitted with a sophisticated float valve and one way valve, which will shut off when the tank is full.

"Again a tank level sensor is fitted to this tank and the signal is sent via Wi-Fi back to the office."

When the valve is activated and flow is stopped, pressure of the main plant's transfer pump site rises to about 125psi.

The transfer pump is then shut down via a pressure switch at the main plant.

Every hour, a timer in the control box attempts to restart until the level of the main tank (on the hill) falls and the valve reopens, allowing for normal flow to recommence.

"Water from the main tank on the hill is fed back down the three kilometres in two poly pipes," Mr Sewell said.

"A 50mm poly pipe feeds the five houses for all their main needs such as showers, washing, toilets etcetera.

"A second line of 75mm poly pipe supplies the farmyard with water for gardens, the orchard, water for around the sheds and also pure water for crop spraying.

"The gravity head pressure of water to the farmyard is 75psi and there is no need for any further pumps.

"This pressure will run 12 butterfly sprinklers in the garden."

Demand on water varies, particularly in busier crop spraying times where it can reach anywhere between 40,000L to 80,000L per day.

When it comes to the future expanding the plant, Mr Sewell wants to increase the raw water supply.

He will do so by drilling an extra two to three bores, allowing most of the operation to run on solar power during the day.

Two additional Air-Well pumps would be installed, well away from the power supply.

"A compressor at the main site will allow airlines to be run to the pumps," Mr Sewell said.

"A further solar pump may be used on one of the bores.

"The plant is alongside the main Western Power line and is being upgraded from a 10 kiloWatts transformer to a 25kW transformer to cater for the extra requirements for peak power.

"An increase in transformer size will allow the current 7kW solar panel supply to be upgraded to about 12kW.

"We are only allowed to install panels to about 50pc of the transformer."

Comparing the statistics of last month's usage to the water scheme previously used, there is no denying there has been significant cost savings.

To break it down, the savings/costs over 30 days in September at Mr Sewell's farm were as follows: 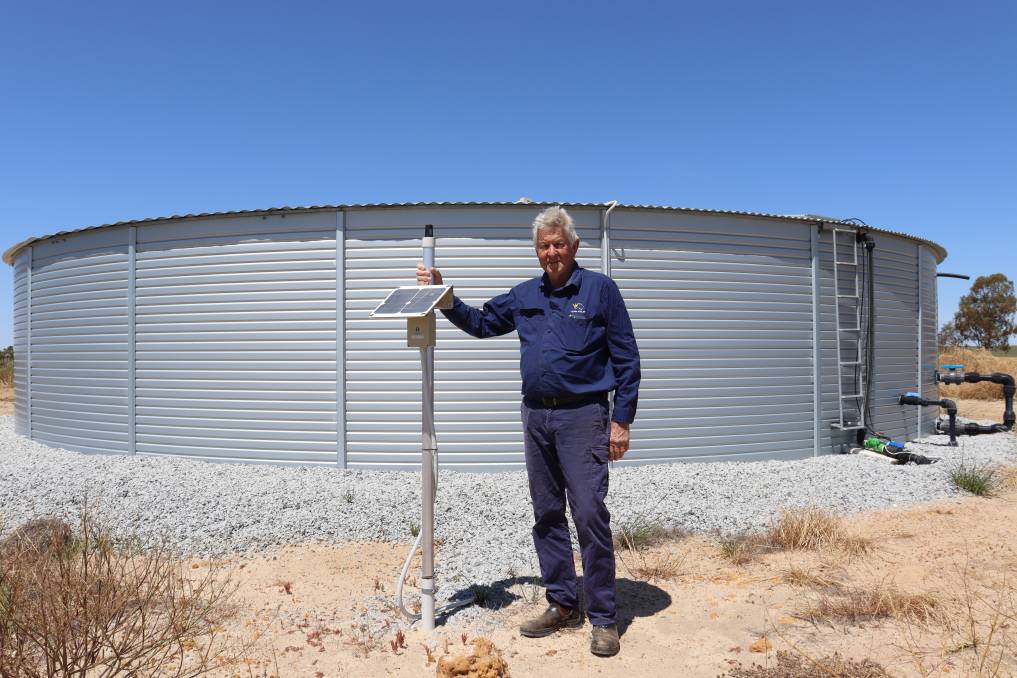 Mr Sewell uses products from Origo Farm a technology company in Bibra Lake to monitor all the functions of the desalination unit.

Apart from regular replacement of paper filters, annual servicing of the plant's main membranes is the main out-cost, and can be expensive depending on the raw water quality.

Previously, Mr Sewell was removing the membranes and sending them to Perth for cleaning or replacement.

This could cost anywhere in excess of $1000 and also put the plant out of action for a number of days.

To overcome this - while also saving time and money - Mr Sewell installed a Clean in Position (CIP) facility in his plant.

This has allowed him to rotate between the plants and run a hot water back flush with the appropriate chemicals to keep the units in prime condition at a cost of "a few dollars".

A membrane clean can take about 12 hours for the soak and flush and as there are two units, the supply is not stopped during this process.

Mr Sewell uses products from Origo Farm - a technology company located in Bibra Lake - to monitor all the functions of the desalination unit.

It can be used wherever he is, as long as there is a phone signal.

Current monitoring of the plant provides information on: Plant running operation, plant flow rates for each plant, water levels on the raw water tank, water levels on the permeate water tank, flow rate of the water being pumped up the hill, flow rate of the water reaching the tank on the hill (used to monitor leaks, tank level of the main tank on the hill and a mobile activated valve to direct water to other tanks

"All these functions can also advise us of a problem if any occur by using the service of text message from the main Origo headquarters," Mr Sewell said.

"Desalination really has been a no-brainer and gamechanger for us.

"Although we didn't suffer in drought because we had the water scheme, I would say we are 100pc drought-proof now."