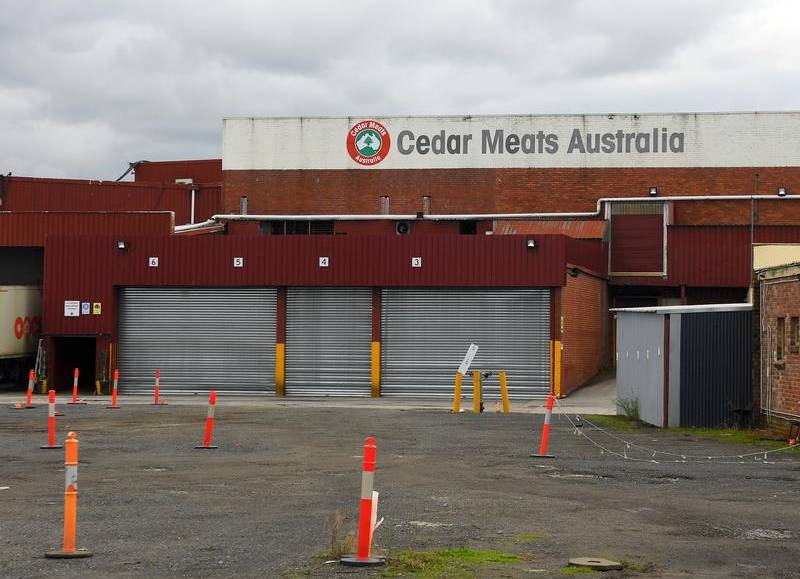 DIFFERENT MODEL: Cedar Meats, Brooklyn's business assets and operations have been acquired by Global Meat Exports, which is a wholly-owned subsidiary of the AustAgri Group Limited (AustAgri).

Small investors may soon be offered the chance to buy units in the Melbourne abattoir, at the centre of last year's coronavirus outbreak.

Cedar Meats, Brooklyn's business assets and operations have been acquired by Global Meat Exports, which is a wholly-owned subsidiary of the AustAgri Group Limited (AustAgri).

"GME will now prioritise the inclusion of Cedar's Mildura plant and is also in the final stages of negotiating a third facility to amalgamate."

On satisfactory completion of the legal and financial due diligence of the company, AustAgri said it expected to list on a fractional investment platform, the DomaCom Fund, run by DomaCom Ltd, (DCL) Australia.

Using the platform, investors can buy a fraction of a share in a range of asset classes including property, mortgage-backed securities, renewables, affordable housing, disability accommodation and debt securities.

Investors can specify how much money they want to put into a particular company, rather than buying a specific amount of shares.

"The plan is for AustAgri to be transitioned into the DomaCom Fund," DCL chief executive Arthur Naoumidis, said.

"Whilst shares in DCL are suspended, the DomaCom Fund is fully operational and has in fact grown during this suspension period.

"DCL will remain suspended until we complete a capital raise to have sufficient cash to demonstrate compliance with (an ASX) listing rule.

"We are now in the process of completing this capital raise."

Mr Naoumidis said the planned inclusion of AustAgri onto the platform had been a "stop-start affair" since it was first announced a year ago.

"But at last real progress has been made, with the acquisition of Cedar Meats business assets and operations by GME," Mr Naoumidis said.

"This means we can now again resume final legal and financial due diligence for this company-transforming transaction.

"If it completes, the AustAgri Transaction will provide a significant boost to DomaCom's revenue base and total funds under management."

He said as the AustAgri due diligence process recommenced, DCL would continue its efforts to complete the funding shortfall raising.

That would be a precursor to shares resuming trading on the ASX.

"DCL reiterates that no assurance can be given as to if or when the AustAgri Transaction will complete," the company told the ASX.

Mr Naoumidis said DCL currently had $90 million of assets on its platform.

It told the ASX that GME had entered into a loan facility, which enabled it to settle on acquisition of the Cedar Meats business.

"In the meantime, formal valuations are being refreshed for the Cedar Meats business and the properties to facilitate the refinancing of the transaction loan with a longer-term loan to facilitate the next phase of its development," DCL told the ASX.

Mr Naoumidis said the potential inclusion of AustAgri on the DomaCom Fund would give that company access to capital to expand.

"This is just another asset that can exist on that platform," he said.

In June, DCL told the ASX statements made about the operations and assets of AustAgri were "partially inaccurate.

DCL accepted that AustAgri did not have "active operations in dairy, fresh milk, milk powder and infant formula, the export of livestock and chilled beef and lamb.

"DCL understands from AustAgri that each of these businesses form part of the 'paddock to plate' acquisition strategy .... which, once completed, is expected to result in AustAgri holding assets valued in the region of $300 million."

DCL told the ASX that AustAgri intended to expand Cedar Meats lamb and goat business, by acquiring several pork and beef processors, enabling it to be able to bid for supermarket business.

"One of the subsequent companies intended to be acquired by AustAgri has a distribution heads of agreement with a 300 plus supermarket chain that will greatly increase the sales of the underlying business."

The medium-term strategy for AustAgri was to build a portfolio of assets in the agricultural/food space, over the next three years.

It would then place an Initial Public Offering on the ASX.

In the mean time, Cedar Meats would continue to operate and trade as normal, the company's spokeswoman said.

"The business will remain family operated by both Pierre and Tony Kairouz and all current management and staff will remain."

They are expected to obtain a substantial ownership interest in AustAgri, which is currently being negotiated.