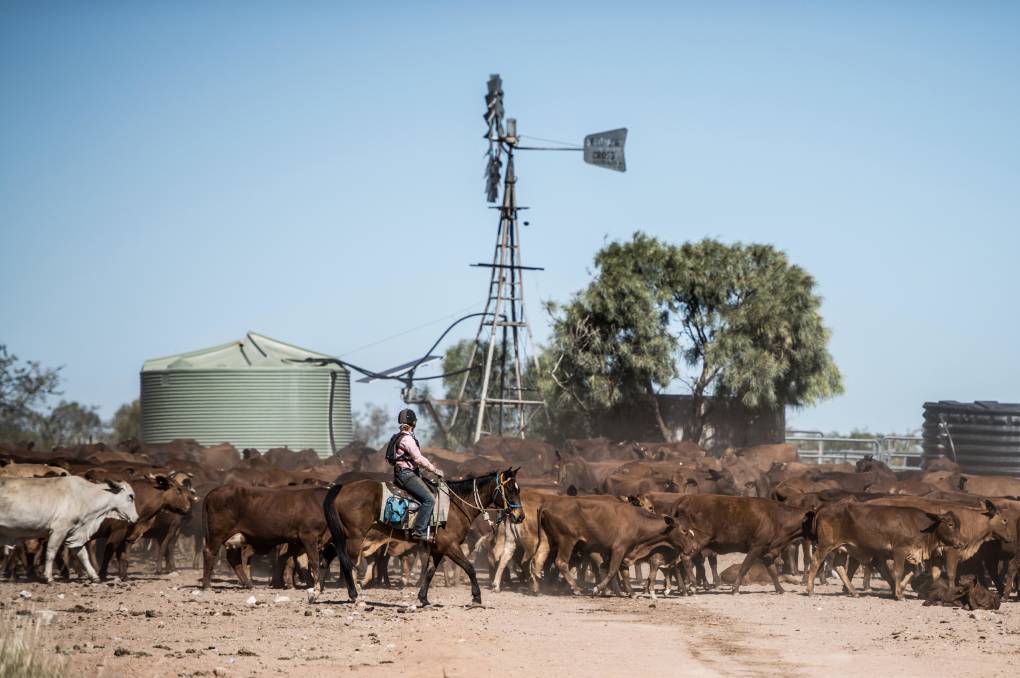 On her horse Dunda, holding a herd of cattle, after arriving at a mill.

IT is hard to believe Tara Shiels did not grow up with a farming background.

But the difference is - unlike a generational farmer - Ms Shiels was born and bred in the Blue Mountains, west of Sydney and moved to the red dirt plains of the Pilbara only three years ago.

"There was absolutely no agriculture (in the Blue Mountains), but for some reason I have always been drawn to the industry," Ms Shiels said.

"As a kid I loved the veggie garden and I have always enjoyed learning about where our food comes from."

So how does an 18-year-old, fresh out of high school in the city, find their way to a 250,000 hectare cattle station north of Marble Bar in WA?

With determination, ambition and drive - that's how.

"When I was about 12-years-old I watched a video about working at a cattle station and decided I had to give it a go," Ms Shiels said.

"But with zero experience I had to find my way into the industry.

"I knew I had to make it happen, so as soon as I graduated from high school I started ringing pastoralists.

"I spoke to a lot of people over the phone, who worked at stations in the Kimberley and Pilbara region and that's basically how I found my way to Yarrie station."

As most positions at the time were filled, Yarrie station owner and manager Annabelle Coppin offered Ms Shiels a stint of work experience.

It was a dream come true and provided the perfect opportunity to learn everything from scratch.

Ms Shiels packed her bags for the adventure of a lifetime and she has not looked back since.

Not once did it cross her mind that she was making such a big move, as she was "too excited".

"It was probably narrow-minded of me to be like 'no I am going, let's do this'.

"Then when I got there it was just so good to be welcomed with such open arms by everyone and everyone being so willing to teach me.

"I didn't even know how to do up a ratchet strap, I couldn't drive a manual car - there were so many basic skills that I never had been taught or exposed to coming from town."

As most country people do, the team at Yarrie station took Ms Shiels under their wing and taught her everything she knows.

She found that arriving in April - before mustering - was the perfect time to ease into life on the station and in the Pilbara.

"Professionals in the area - including livestock handling specialist Boyd Holden - trained us at the beginning of the year," Ms Shiels said.

"Boyd showed us how to work cattle properly and safely and all about working with stock.

"Then farriers hosted horsemanship clinics and taught us how to shoe our horses.

"We were trained by loads of very experienced people, as well as Annabelle of course, who throughout the season helped us with anything we needed."

Ms Shiels described the first season as eye opening and said it was about absorbing what was going on, rather than trying to push herself too hard.

"I was like 'OK this is what needs to be done, let's just focus on doing that and then we will focus on the next thing'.

"My second year was about breaking it down, for example, I knew we were vaccinating animals, but it was more so about me asking 'why are we doing this?'"

Today, Ms Shiels passes on the skills she has learned to others, having taken on more of a leadership role within the team.

This has included stepping in as a stock camp team leader when needed.

Her role also extends from station hand duties to working in Outback Beef, which is Yarrie Station's retail beef business.

Ms Shiels assists with social media, marketing and beef sales at markets and over summer is involved with deliveries, customer service and co-ordinating all of the meat in the Pilbara. 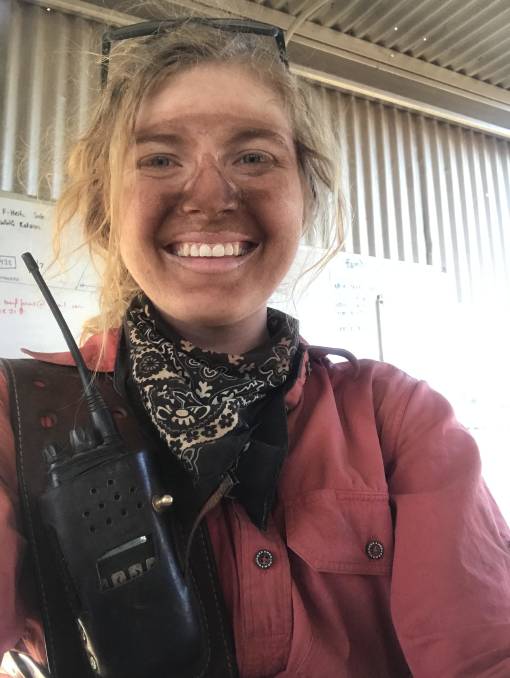 Born and bred in the Blue Mountains, west of Sydney, Tara Shiels moved to the Pilbara three years ago, to pursue her dream of working on a cattle station.

"We do individual identification for all of the cattle on Yarrie station.

"Basically I am charge of knowing where every cow is and all of their information including their sex, age, class, what are they at the time and where they are.

"Then there's normal station hand duties on top of that, so working the yards, mustering, fencing.

"I'm not the best at mechanical jobs yet, but I am giving it a go."

Having come from a non-agricultural background, Ms Shiels' family and friends in New South Wales are always fascinated by her life at the station.

She shares her story to bridge the rural and city divide and to show that you don't have to come from a farming background to work on the land.

"I think it is great that so many people are interested in what we are doing out here," Ms Shiels said.

"We are just some people in the outback, running around and having some fun.

"So it is really cool that people, who have no idea, want to know what we do, find it interesting and love seeing photos and watching videos.

"I find people want to know even the finer details as well, not just all the fun stuff.

"They want to know how we are treating our cattle, how the operation works, how the cattle get to abattoirs and what our markets are, they are quite intrigued."

While Ms Shiels' agricultural experience has so far been focused on cattle work, her interest spans across all areas.

And she said her goal was to work through all sectors, be that harvesting, grain, sheep or horticulture.

"I want to work around them all and see what they are all about,'' she said.

"I don't have a very definitive goal of what I want to get out of the industry just yet, I just want to work my way around and hopefully spark interest in a few things.

"I know it will be part of my whole life, just working in agriculture and I might do a few other things as well, but it will be a big part of it throughout my time.

"I guess I'm just keeping it steady and not worrying too much about what I am going to get out of it yet."

Having worked three seasons at Yarrie station, Ms Shiels said a highlight that represented the journey she had been on was winning the Kimberley Pilbara Cattlemen's Association Livestock Handling Cup last month.

Ms Shiels' was part of the all-female team - the Jincarlie Gems - alongside teammates Abby Staines and Katie Knarston, who were crowned champions on the day.

The team kept their tactics simple, as moving cattle in a low stress manner is what they do everyday.

"The methods that we have been taught such as the 'inverted T' and pressure and release were the two that we went into the competition focusing on," Ms Shiels said.

"Having fun, keeping it light and communication was a key reason our team worked so well together though."

She added that low stress livestock handling was all about how cattle were approached and treated.

And a big part of that was "understanding the animal's situation", particularly as they are being moved through gates, the race and crush and then vaccinated.

"There is a lot that goes into low stress stockmanship but the basic principles are practical and can be easily carried out," Ms Shiels said.

"I still have a very long way to go when it comes to my stockmanship.

"I have barely scraped the surface, but I'm willing to keep learning and improving.

"The low stress livestock cup was the perfect way to view some excellent displays of stockmanship from people who have been in the industry far longer than I have, it was great to have the opportunity to watch them."

While winning the cup has been a highlight of her career, Ms Shiels' said her favourite part about working on the station was the people.

She said the friendships - or family as she called it - were "really something else".

"We have so much fun it is actually ridiculous sometimes and I know that doesn't happen in every workplace, particularly so consistently - over the past three years I have been here anyway.

"And I know that was the case beforehand as well, it has been amazing team, after amazing team and that has been proven this year because pretty much everyone is returning for the 2022 season.

"You plan to come here for a few months and (in my case) you end up staying three years, or should I say even four years, as I am doing next year as well.

"That's how you know you are onto a good thing."