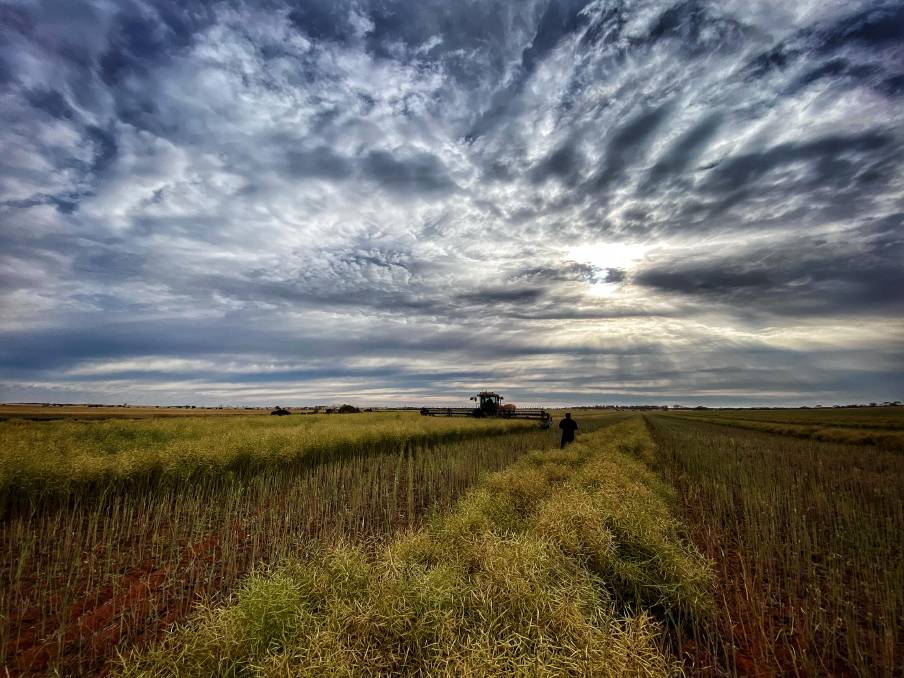 As far as harvest goes in the Dalwallinu Shire, canola is starting to come in and barley will soon. Things will be getting very busy in the next couple of weeks. Pictured is William Roach swathing at East Pithara with Jerry from Quantum Ag. Photo by SkyworksWA.

The latest crop report released by the Grain Industry Association of WA (GIWA) has put the estimated total at 19.2 million tonnes, a 100,000t reduction on the estimate from last month.

FROST and a dry spring have reduced tonnage estimates for harvest, but Western Australia is still on track for a record production year.

The latest crop report released by the Grain Industry Association of WA (GIWA) has put the estimated total at 19.2 million tonnes, a 100,000t reduction on the estimate from last month.

With harvest having officially commenced in the north of the State, small areas of canola, barley and wheat have been taken off and early indications are that grain yields and grain quality are not as bad as feared considering the lack of rain in the spring.

Crop report author Michael Lamond said the top half of the grainbelt has had virtually no useful rain for the past nine weeks, finishing solely on subsoil moisture.

"Whilst it is expected there will be a range in grain yields, influenced by soil type and other factors, total grain tonnage for the region will be at least that estimated," Mr Lamond said.

"The mild temperatures across the State to date have had a significant impact on allowing crops to fill grain.

"That is particularly the case in the central and northern regions where soil moisture reserves had declined to very low levels during September, with the cool conditions having halted the rapid loss in grain yield potential in these regions."

While in the southern regions of the State, where frost damage has been less and there has been more useful rainfall, grain tonnage estimates have increased from last month.

Those regions of the grainbelt have continued to improve due to some useful rainfall events in September and the cool conditions, plus the mild temperatures in the past month have given crops that were waterlogged during winter time to recover.

The lack of significant frost across the southern regions will help to keep average paddocks yields in most cases above average.

However other parts of the State have not been so lucky when it comes to frost.

"The previously reported extensive frost in the worst hit areas of the central grainbelt and subsequent minor frost events over a larger area in September, have taken the top off the potential grain yields," Mr Lamond said.

"The full impact will not be known until harvest as crop type, sowing date, topography, soil type, stubble load and fertiliser usage have impacted to different degrees and the combination of all these factors makes it difficult to estimate actual final tonnage."

Whilst the variance in potential final tonnage per hectare across the State is wide, the record planting of close to 9.2 million hectares will contribute to a lot of grain being produced in WA this year and it could still end up being a record total tonnage despite the dry spring, frost in large areas of the grainbelt and severe winter waterlogging in the higher rainfall regions.

Harvest at Balla, north of Yuna, started on October 9. This crop is Hyola 410 Truflex canola which was sown after ex-Tropical Cyclone Seroja. Photo by Alex Grove.

HARVEST is underway in the Geraldton port zone and the small tonnage taken off so far is suggesting that the very dry spring has not had the affect on grain yield and grain quality that was initially feared.

The cereals from the lower rainfall areas have been up about two tonnes per hecatre with low screenings, while the canola is yielding between 1.5t/ha and 2t/ha with mid-40 per cent for oil.

Mr Lamond said wheat grain yield has been more affected by the dry spring than canola and lupins, with pre-harvest insurance estimates well below the potential reported in August.

"Most wheat has filled only two grains across and most growers expect grain yield to end up being average to just above average," Mr Lamond said.

"However, the cool conditions have contributed to allowing the heads to fill grain rather than pinch off, resulting in fewer screenings than would have been the case with normal spring temperatures.

"The canola and lupin crops have appeared to benefit more from the mild finish to the season than wheat and most canola in the medium to high rainfall zones is expected to yield close to 2t/ha.

"The lupin crops have generally not produced as many pods as expected from the high biomass produced, although yields are expected to be in the 1.8-2t/ha range in the west and 1.5t/ha in the east."

Barley in the region went in early and has finished well - most of that was grown in the southern areas of the zone and a big proportion goes to bins further south, delivered out of the actual zone.

THE continued dry spring has kept a lid on potential grain yields in the Esperance zone, although some recent light rainfall events will benefit some of the later crops.

Swathing of barley has started and canola is not far off being swathed or desiccated.

Mr Lamond said much of the canola and cereals look better than they will probably yield as the dry finish has reduced their potential yield significantly.

"The zone will easily reach the tonnage estimated due to the extra area of crop sown over previous years, coupled with very good growing conditions in the west and south coastal regions and minimal frost damage in all areas," he said.

"Pulses look particularly good, as do the lupin crops - all have podded up well and with most unaffected by frost, are expected to yield above average.

"The western areas of the zone have emerged out of the past three years of well-below-average rainfall to be on track for some very good grain yields in all crops."

This region has had minimal frost damage for a change and combined with the gradual finish to the season, will contribute significantly to the total tonnage for the zone and could push current tonnage estimates up further than what is estimated in this report. This wheat from Woodanilling, captured at the start of October, was the last of the crop to go in and it looking pretty good, but is still a while off harvest. Photo by Jane Taylor/@that.wheatbelt.life

ALBANY West is still a little way off commencing harvest with the cool weather and recent rainfall events contributing to delaying crop maturity, however conditions continue to improve for the region as the mild spring has aided crop recovery from waterlogging.

There are going to be huge differences in grain yields within paddocks - the good areas, away from the waterlogging, are exceptional and the worst of the waterlogged areas are very poor.

The soil profile still has reserves of moisture and where crops can access this, grain yields will be well above average.

Mr Lamond said cool spring temperatures have given crops in Albany South extra time to recover from the winter waterlogging.

"That has resulted in a slight increase in expected tonnage for all crops in the region except those in the worst affected areas," Mr Lamont said.

"The waterlogged holes will still have an impact on average paddock grain yields, and for some growers the impact will be large.

"Waterlogged areas re-sown to barley are going well due to the slow finish to the season and most growers wished they had re-sown more of the wet areas."

In the Albany East area, all crops are looking very good, and the region is set for one of the best years for a while.

Useful rain in September and minimal frost damage have set the region up for some very good grain yields in all crops.

"Barley and wheat crops are on track to be 20 per cent up on recent averages and canola crops are the best ever seen in the district," Mr Lamond said.

"The Lakes region is doing the heavy lifting in the Albany port zone this year, with the western and southern regions likely to be just average overall."

"Total tonnage for the zone is likely to be slightly more than 2020 which was one of the largest crops on record."

IN Kwinana North Midlands, the combination of the dry spring and areas of frost in the region have taken the top end potential of most crops, although on balance overall total tonnage is likely to be similar to 2020.

Some useful rainfall events in the western regions during September have contributed to holding tonnage estimates up west of the Miling line, while east of there less rainfall was received and it has only been the cool conditions that have helped slow the decline in tonnage expected from the complete lack of spring rain.

Combined with the dry spring, the severe frosts have had a devastating affect on many growers in the eastern regions, cutting potential tonnage to below average, plus there are also areas in the south-eastern portions of the Midlands region that were hit with several frost events later in September.

Mr Lamond said the very western areas of Kwinana South that were affected by waterlogging in the winter, have improved in the past month and all crops are expected to be above average.

"In the eastern areas it is quite mixed with big areas to the north-east in the Goomalling, Dowerin and Cadoux region down to Tammin and Kellerberrin badly hit by frost and lack of rain," he said.

"However, the southern parts of the zone have recovered from waterlogging and where there is minimal frost damage, all crops will be above average.

"The Kwinana North East region has been the worst hit area for frost in the State, and combined with no spring rain, will be well down on tonnage estimates reported in August.

This year the frosts that had the greatest impact were shorter in duration in terms of days, but were longer in hours overnight as well as being extremely cold.

The worst of the frosts were centered in the central regions rather than the south.