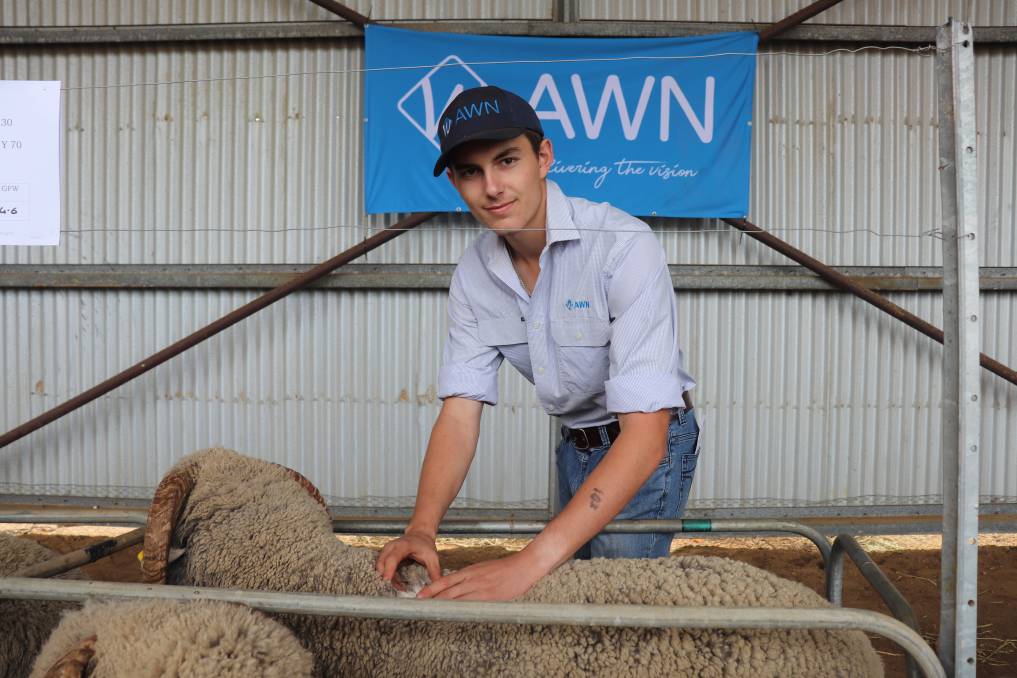 Australian Wool Network trainee Josh Harley at a recent ram sale. He plans to start as a "stockie" and work up to auctioneer while putting together his own sheep enterprise.

A livestock trainee since January with Australian Wool Network (AWN) and currently learning on the job with Jurien livestock agent Greg Wootten, Josh, who turned 18 in May, admits he likes to talk.

TURN up to a livestock sale in five years' time and there is a good chance the tall, tanned, good looking young man in a big hat calling bids in a machine-gun-paced auctioneer's chant, will be Josh Harley.

A livestock trainee since January with Australian Wool Network (AWN) and currently learning on the job with Jurien livestock agent Greg Wootten, Josh, who turned 18 in May, admits he likes to talk.

He is very good at it and very articulate, particularly for a lad who is still a teenager - a stage in life when many of his contemporaries are monosyllabic.

"I enjoy speaking publicly and talking to people - that's the way you learn from them," Josh said last week during a lunch break on the job with Mr Wootten.

"By talking to farmers about all the aspects of their operations, you pick up good points from some, what not to do from others.

"You put all the good points together so you learn what to do.

"I think it makes you a better stock agent when you have more of an understanding of farming and what your clients are doing."

So far, his time with AWN has taken him to Muchea Livestock Centre with auctioneer Jay Macdonald, he has spent a few days at AWN's woolstore in Bibra Lake, but most of the time has been with Mr Wootton visiting clients and, most recently, helping set up ram sales and helping load stock afterwards.

"Greg's also had me doing some work on farms which helps me learn more about farming and what each farmer does," Josh said.

At the moment he is living on a Warradarge farm, along with his 12-month-old border collie - appropriately named 'the Dog' after the black-and-white canine lead character in Murray Ball's Footrot Flats cartoon that ran for 18 years and finished nine years before Josh was born.

The farm runs an extensive sheep enterprise and has its own team of five working dogs, where Josh helps out in his spare time and 'the Dog' is learning to be a valuable working partner.

According to Josh, his dog is capable of "pushing up" when loading stock on a truck and "backing up in a race", so is already a useful companion.

"I take him with me when I can, but if I'm going to a property where I know they have dogs then I leave him behind - mostly with the old man who has been training him," he said.

The "old man", is Josh's father, former shearer turned fencing contractor Gary Harley, who with wife Theresa, runs a small home farm at Gingin but has a significant sheep and wool operation spread across some lease blocks in the area.

Josh grew up on the farm around sheep and helping his father with fencing work.

He attended the local primary school and Bullsbrook High School for years seven to nine.

The first major "upheaval", as he calls it, in his life was going away as a boarder to attend the WA College of Agriculture, Morawa, for years 10-12.

It was also a turning point, according to Josh.

"I began to be interested in ag, learning about it at Morawa," he said.

"I won a couple of awards (sheep handling and wool handling awards, an English award and, importantly, the most employable student award).

"He said because I liked talking to people that would be a good preference for me."

His gregarious manner and his enthusiasm for everything he attempts also caught the eye of Mr Wootten, who just happens to be Josh's father's stock agent.

When he graduated from Morawa college at the end of last year his heart was set on becoming "a stockie", it was just a matter of with whom and, in that regard, AWN and Mr Wootten had the inside running.

Josh said he was about to start an online certificate IV in property services (stock and station agency) course and through AWN has been told he would be considered for training as an auctioneer.

"I hope to be an auctioneer one day," he confirmed.

"I think I'd enjoy being an auctioneer, I'm not afraid of public speaking, I'm good at talking and I enjoy meeting people."

So far, most of Josh's livestock experience has been with sheep and he thinks it may stay that way for a while.

"I did have some involvement with cattle, (at Morawa college) we had a cattle team that went to the (Perth) Royal Show and did leading, parading and (junior) judging," he said.

"I was not so good with leading and parading, but with my ability to talk I was better at judging.

"I prefer sheep - not the wool side of it so much - but working with the animals, the livestock side of it."

Unlike many lads his age who are absorbed in the now, Josh has his sights set on the future.

He knows where his wages will be going and it is not on a jacked-up 4x4 ute with big tyres - he drives an old work ute borrowed from Mr Wootten.

The only spare-time activity he could think of on the spur of the moment when pressed was practising his whip cracking - two whips at once - so no expensive hobbies there either.

"As a young bloke all my money will be spent on buying land and as soon as possible," Josh said.

"You can't lose with land - not in the long-term anyway.

"I've got my eye on some land near Gingin."

Once he has bought his first parcel, there is no doubt at all about what he will do with it - run some sheep, of course.