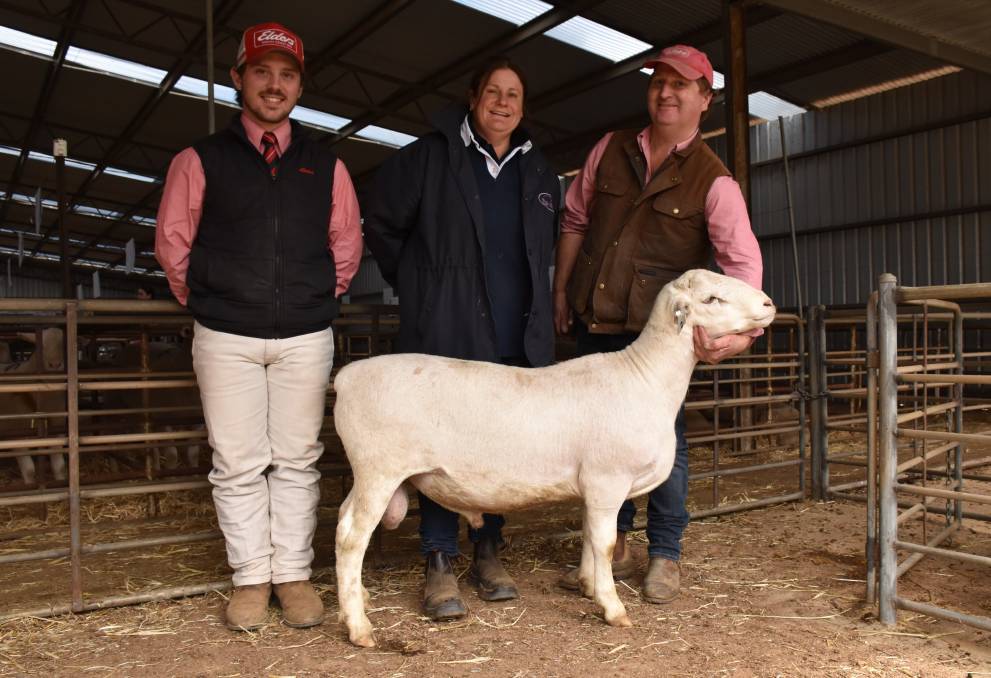 Dorpers, White Dorpers, White Suffolks and Ida Vale's own shedding composite Western White Shedders all recorded good price gains and by the end of the sale there were still unfilled orders.

Stud principals Tamesha Gardner and Andrew Greenup chose to open with 34 Western Whites and they proved that a lot can change in the course of 12 months with prices bounding upwards under strong competition from local and AuctionsPlus bidders.

The unregistered breed cleared 23 of its 33 rams last year but this year all 34 sold quickly under Elders auctioneer James Culleton's hammer to average $2103 compared with $1391 last year and also set the top price.

Their success was special for Ms Gardner who, before the sale, said her father Bronte had foreseen the need for a different type of non-shearing sheep and started developing the shedding composite (derived from White Suffolk and White Dorper) before his death 15 years ago.

Since then, they had come a long way to offer greater diversity and give buyers a breed with the quality performance figures they were now seeking.

After last year's low 72 per cent sale clearance, she admitted some concern going into this year's event saying she liked to put up a good number of rams to give clients a big selection.

Her concerns were unfounded.

"We only had one passed in and that sold later so we are pleased with today," Ms Gardner said.

This year it attracted at least 15 first time buyers among the 51 names on the buying register with some coming from as far as regional Geraldton and Esperance.

Elders prime lamb specialist Michael O'Neill said the result was stronger than his pre-sale expectations in all sections.

He said the renewed interest in shedding breeds had helped and the Western Whites offered an alternative to the Poll Dorset base of other shedding breeds and people were keen to try them.

"A highlight of any sale is the number of seedstock producers who come to buy and there were three here today,'' Mr O'Neill said.

"I can't think of many other sales that have had three stud buyers this year."

The shedders had a full set of Australian Sheep Breeding Values (ASBVs), one of the prerequisites whenever Mr Hawkes is buying and his choice, bought on behalf of Adrian Anderson, Wellstead, had a 155.98 Maternal Carcase Production Plus (MCP+) index putting it in the highest one per cent for shedding maternals.

He said Mr Anderson had a long-established flock of 5000 shedding ewes based on White Suffolk, Dorper and Van Rooy and had been attracted to Ida Vale because of its figures-based breeding.

His intention was to use the ram in a nucleus to breed his own rams.

Mr Hawkes also bought a second ram for $4000 on account of Parker Farms.

The line-up opened with a $5000 Western White that was knocked down to Ron and Ruda Edwards, Muchea, who bought a second ram for $2600 then moved onto the White Dorper offering to buy the $4500 top price ram in this category.

The couple have a small property running 200 sheep and some cattle and had bought Ida Vale rams in 2014 and 2015.

A total of 11 buyers operated on the shedders and the most active was Wyndarra Grazing, Perup, which bought five for up to $2700 and averaged $2440.

Wyndarra Grazing's Kent and Nicole Muir said they were just getting into White Dorper sheep after buying mated ewes and ewe lambs early this year.

They had about 1000-head to join and planned to run them with their cattle, saying it gave them diversity and better grazing options.

The sale was interfaced with AuctionsPlus (AP) but local graziers kept ahead of their AP counterparts allowing just four Western White rams to leave the State and the best of these fetched a $2800 top.

After buying the second top price Western White, Mr and Mrs Edwards then moved onto the White Dorper offering to pay the $4500 top price for the first ram in this category. 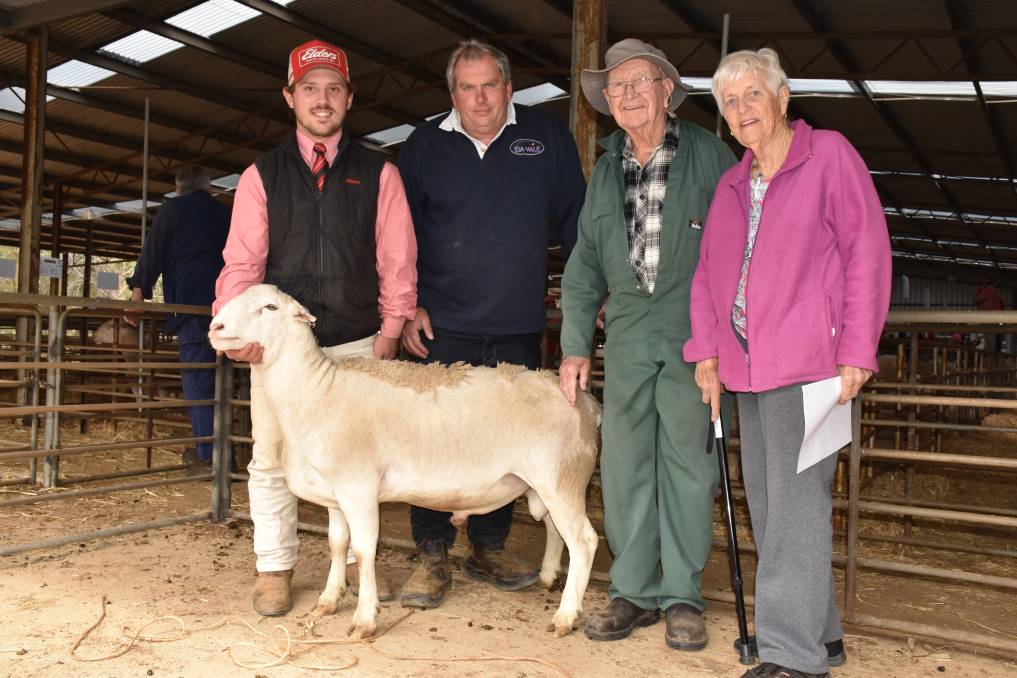 Again, their selection had all the signs it would have a clean pelt by the end of spring and figures put the ram above average in all traits, with the exception of slightly high birth weight.

Mrs Edwards said all three rams would be used to improve shedding characteristics in their self-replacing flock.

In general, White Dorper rams with good figures and clean shedding sold easily to achieve a total clearance of all 25 at a $1640 average, up $176 on 2020.

Barkley Royal Farming Co, Cunderdin, was one of the day's biggest buyers, taking home four Western Whites and four White Dorper rams and spending up to $2100 for the best of each breed.

Dorpers always have been a small but consistent section of the Ida Vale offering to supply a specialised market that requires exceptional hardiness for tough environments.

The 19 offered and sold averaged $1326, up $176 on last year's result and many went into Wheatbelt regions.

Dean Levett, Bandyana Farms, Walkaway, has been a long-term sale regular and returned this year to rank among the volume buyers, getting seven rams for up to $1200.

Another first-time buyer Australian Food & Farming, Pingrup, also bought seven for up to $1600.

Two rams with exceptionally high indexes set the $4000 top and $3250 second top prices in the White Suffolk offering and neither were bought by stud breeders. The Smith family, Baboo Pty Ltd, Green Range, known for their astute stockmanship are renowned for buying quality regardless whether it was sheep or cattle.

They bought just two rams which included the top price ram and the team leader knocked down for $2000.

Their top price ram had an exceptional 160.77 Terminal Carcase Production (TCP) index putting it in the top one percentile band for terminals and showed breeding value components of 14.4 for WWT; 22.52 for post weaning weight; -0.75 PFAT; and 2.64 for PEMD.

Speaking on behalf of the buyer Mr Hawkes said the family ran a 10,000-ewe Merino flock and had a small White Suffolk nucleus flock to breed their own terminal sires.

Wandering stud breeder Ryan Marwick scoured the offering and was successful on the $3250 second top price ram which had the sale's highest TCP index at 164.23.

He bought on behalf of CJ Stokes & Son, Durawah, near Geraldton.

Two studs were successful at $2100 paid by Royston, Napier, and $2000 paid by Rhos Gwyn, Mt Barker, but it was the big number of returning local commercial buyers who were the backbone of the sale.

More than 20 buyers pushed White Suffolk averages to $1382, up $125 on last year and the single ram that was passed in during the auction cleared within minutes of the selling team stepping off the rail to give a perfect result.

With such a strong buying contingent few went home with big numbers but among them was the day's biggest volume buyer Beech Banks Farm, Tenterden, which bought nine for up to $1900 and paid a $1589 average.