According to the long-term average, seven tropical cyclones will form in or pass through the western region per year and there's a 61 per cent chance that WA will have more than that during the upcoming season. 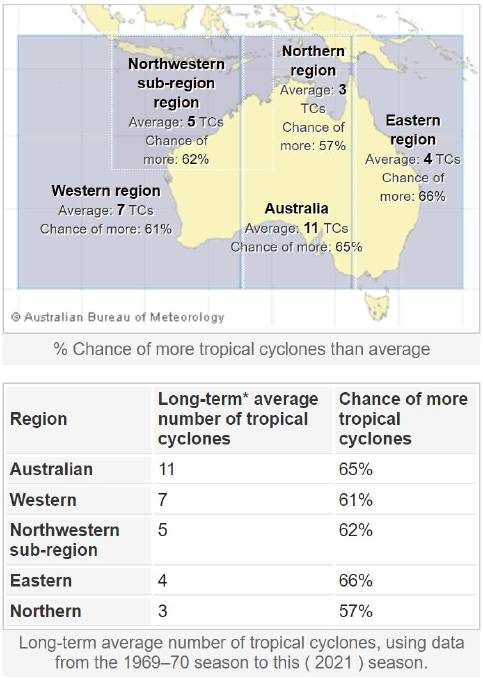 WESTERN Australia can expect to experience an average tropical cyclone season for 2021-22 (November-April), according to the Bureau of Meteorology (BoM).

According to the long-term average, seven tropical cyclones will form in or pass through the western region per year and there's a 61 per cent chance that WA will have more than that during the upcoming season.

On the other hand, there's a 39pc chance that there will be fewer than average tropical cyclones this season.

"The increased likelihood of La Nia development in the tropical Pacific Ocean and average to warmer-than-average sea surface temperatures to the north of Australia have influenced this year's tropical cyclone outlook," BoM said.

"In La Nia years, the first cyclone to make landfall on the Australian coast typically occurs earlier than normal, around the middle of December.

"During average years, the date of the first tropical cyclone to make landfall over Australia is typically in early January.

At least one tropical cyclone has crossed the Australian coast each season since reliable records began in the 1970s.

Cyclone formation is rarely spread evenly throughout the season and often quiet periods are followed by bursts of activity.

Tropical lows that do not intensify into cyclones, or lows that are the remnants of older cyclones, can still produce damaging winds, widespread rainfall and dangerous flooding.

These impacts can extend beyond the tropics into southern areas of the country.

Typically, five cyclones form in or pass through this area each season.

About 40pc of tropical cyclones, or their associated tropical lows, affect coastal areas of the north western sub-region.