The sale was red hot from start to finish on the back of strong support from local and Eastern States' buyers and this resulted in records tumbling. The sale was red hot from start to finish on the back of strong support from local and Eastern States' buyers and this resulted in records tumbling.

Prices hit a high of $26,000 to set an auction top price record for the stud while the average reached $3961, to now rank as the highest figure ever recorded at a single vendor ram sale in WA.

This year's sale team of July/August-drop, paddock-raised rams had an average Dual Purpose Plus (DP+) index of 187, which is in the top five per cent on MerinoSelect.

The intense competition from not only the 42 registered buyers in the shed but also 58 registered bidders on AuctionsPlus, logged in from Victoria, New South Wales, Tasmania, Queensland, South Australia and locally, ensured the Nutrien Livestock team, led by auctioneer Michael Altus, had no trouble selling the increased offering of 174 Poll Merino rams.

The sale catalogue on AuctionsPlus received 6052 views, while there were 596 online bids placed across 98 lots, resulting in 42 rams selling to Victoria, NSW, Tasmania and South Australia.

In comparison last year when the sale was interfaced on AuctionsPlus for the first time there were 24 registered bidders logged in and 452 online bids placed resulting in 48 lots selling through the platform.

This meant all the important figures grew again for the stud with the number of rams sold up by 27 head, while the gross nearly doubled being up $331,600 and the average was up $1524.

Nutrien Livestock Breeding representative Mitchell Crosby said it was another great sale for the Anderson family.

"Over the past five years in the sale there has been demand from all parts of Australia and that was evident again this year, which is testament to the stud's breeding objectives," Mr Crosby said.

"This Eastern States' support in both the shed and on AuctionsPlus was coupled with strong local interest also and both contributed to the sale's success.

"The rams were presented with a full suite of ASBVs including wool, carcase, fertility and worm egg counts, breech wrinkle, and buyers responded accordingly.

"The final sale result was a credit to the stud's breeding program and the effort it goes into collecting all the data for the ASBVs."

The tone for the sale was set early with the first half of the catalogue (87 rams) averaging $5181 which was helped along by not only the top-priced ram making $26,000 but another two also selling for $20,000 or more.

The $26,000 top price was achieved early in the sale when Mr Altus stood over a white woolled ram with an impressive set of numbers in lot 12.

Mr Altus took an opening bid of $7000 on the ram and from there a couple of interested buyers went into overdrive with their bidding.

It ended up being a two-horse race between Elders, Kojonup wool and livestock representative Alex Prowse, who was taking buying instructions over the phone from the O'Connor family, Oxton Park, Harden, NSW and long-time Anderson buyers the Sounness family, Paper Collar Grazing Co, Amelup and it was Ms Prowse in the end who was on the right side of the ledger and ensured Oxton Park was written down as the buyer on the sheets.

Not only did the double polled (PP), single born and raised ram, by Anderson 180633, display a good structure and a nice even crimped wool, it had the ASBVs to match.

Oxton Park livestock manager Paul O'Connor said the purchase marked the first time they had bought a ram from the stud, but they were familiar with the stud's genetics as they had used semen from an Anderson ram in their 2019 AI program.

"We have one-year-old rams from this AI program on the ground and we are happy with the way they look, so we decided to put our toe in the water at this year's sale and see if we could purchase a ram," Mr O'Connor said.

"We have been breeding dual-purpose Merinos for a long time, we think this ram is a good dual-purpose type and will provide us with an outcross bloodline for our flock.

"He has good figures across the board in particular for fat, eye muscle and growth and its worm resistance was also good which was an attraction."

The O'Connors run a nucleus flock to breed rams for their own use in their large commercial operation in which they join 10,000 ewes to Merino rams and 6000 Merino ewes to Poll Dorset rams.

The second top price in the sale was $21,000 paid for the seventh ram offered, when Yarrawonga stud adviser Damian Meaburn, had the final bid on the ram and announced it was heading to the Phillips family's stud based at Cunningar, NSW. 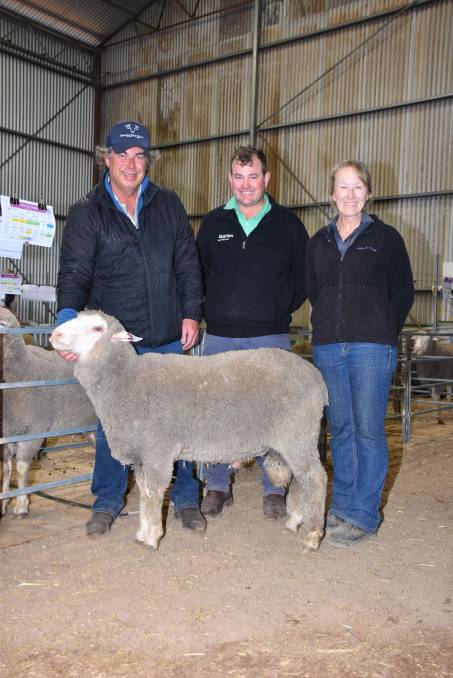 Mr Meaburn said the ram was headed to the family's newly formed Yarrawonga Plus flock, which runs alongside the famous Yarrawonga bloodline.

"The Phillips have established this bloodline as they recognised that animal welfare is continuing to drive consumer demands for Merino products through QA programs like SustainaWool and Responsible Wool Standards (RWS), not only wool but meat as well," Mr Meaburn said,

He said their aim was to breed a non-mulesed Merino with big figures for growth, fat and muscle and reproductive traits.

"This is the first time we have purchased from Anderson Rams," Mr Meaburn said.

"We decided to come and have a look as the Phillips are chasing the data/figures which the Anderson flock has.

"I have classed other Anderson blood flocks in Tasmania, NSW and Victoria, so I know what the sheep can do and we are also comfortable in the way the Anderson flock is heading."

Mr Meaburn said they were looking for a ram with early growth, a moderate frame, a fine micron and good for the number of lambs weaned and this ram ticked all those boxes.

"I think he was the best sheep in the shed and a standout in the catalogue," he said.

"He has a great set of figures including being in the top 1pc for the DP+ index and he is also a twin and a double poll, which was important as well."

The final ram to sell for $20,000 or more was purchased by long-term return buyer the Sounness family, Paper Collar Grazing Co, Amelup, who were the losing bidder on the top two priced rams. After missing out on the two top-priced rams Marcus Sounness and sister Heidi, put the disappointment behind them and went on to pay $20,000 for the PP, single born and raised ram in lot 51.

Mr Sounness said the ram was good all round in terms of its figures.

"Not only did I like his figures but I was also chasing his bloodline, as it will be an outcross for our nucleus flock, where he will be used to breed rams for our own use," Mr Sounness said.

Along with securing the $20,000 ram, the Sounness family went on to purchase another five rams from the catalogue to finish with a team of six at an average of $8208.

Mr Sounness said they liked buying from Andersons because they bred good dual-purpose sheep which did well for a broad range of traits.

"They have good balanced figures, are highly fertile and the lambs grow well," Mr Sounness said.

"This year we achieved a lambing percentage between 105-106pc for everything joined (Merinos and White Suffolks), while our mature ewes average about five kilograms of 18.5 micron wool."

This year the Sounness family is upping its joining numbers due to the better season and will join 4500 ewes to Poll Merinos and 1800 ewes to White Suffolk rams.

A fourth ram made five figures when Fox Pastoral, Victoria, bidding through a representative in the shed paid $12,000 for PP, twin born and raised son of Anderson A180633 in pen 21.

This ram ranks in the top 1pc for PWWT, YWT, YEMD, YSC and the DP+ index.

Also heading over the border at good money was a PP twin born and raised ram when it sold at $9500 to LR & RJ Young, Ross, Tasmania.

The ram ranks in the top 1pc for PWWT, YFEC, NLW, dag and the DP+ index.

There were a number of buyers operating in the shed to average more than $4000 for their purchases and the biggest of these buyers were John and Jack South, Knack Pty Ltd, Darkan.

John South said the Anderson sheep lived up to their credentials.

The Souths this year are aiming to join 2500 ewes to Poll Merino rams this season.

Neridup producer John Wallace, Bakaara Farming, also wasn't afraid to bid strongly on the rams he really liked and secured nine rams to a top of $7000 and an average of $4528.

Mr Wallace, who was buying his fourth lot of rams from the stud, said the Anderson rams had sensational figures.

"They have helped us improve our flock in terms of fat, eye muscle depth and yearling weight without sacrificing our wool," Mr Wallace said.

Others to put together sizeable teams at an average of more than $4000 were Benachie Pty Ltd, Kojonup, which averaged $4281 over a team of eight, while HB AG Pty Ltd, Surrey Hills, NSW, purchased eight at a $4156 average.

Wool Solutions wool and livestock consultant Andrew Calvert, Tasmania, was in attendance at the sale and purchased 11 rams to a top of $7000 for three different clients.

When it came to the 42 rams purchased through AuctionsPlus, these went to 12 different buyers for between $1000 and $8500.

The biggest buyer on this platform was a return buyer based at Meerlieu, Victoria, who purchased 12 rams for between $2250 and $4000.

There were three buyers on the Platform to secure five rams which included two return buyers from Victoria - a Hensley Park-based buyer went to $6000 for its selection of five while a Edenhope-based buyer paid a top of $5000 for their five.

The third buyer to secure five rams on AuctionsPlus was a South Australian based buyer for Goolwa which paid between $3000 and $5500 for its selections.