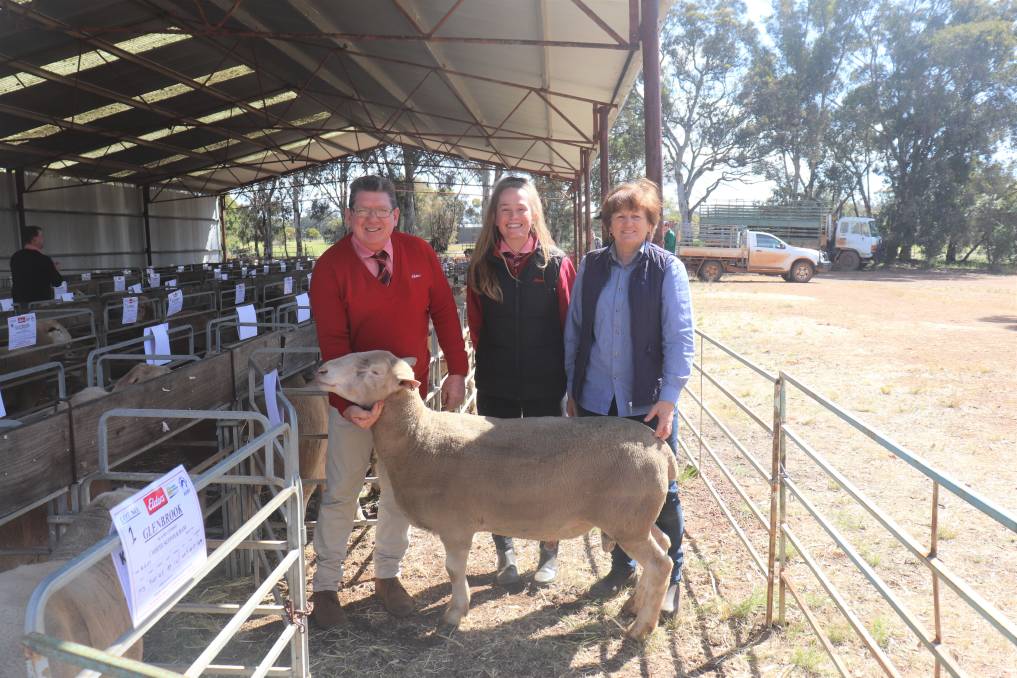 Determined to purchase some quality White Suffolk rams, bidders and onlookers were all rugged up to endure the cooler weather.

VALUES soared to a top of $2250 for a strong result at the annual Glenbrook White Suffolk ram sale held at the Darkan ram pavilion last month.

Determined to purchase some quality White Suffolk rams, bidders and onlookers were all rugged up to endure the cooler weather.

This year's bidding list consisted of 19 potential buyers and at the end of the sale they all left with at least one ram.

The offering was slightly reduced with seven less rams up for sale and the clearance was also down compared to the stud's 2020 sale when 138 out of 138 sold.

Elders again hosted the sale and was auctioneered by Nathan King for the first 80 lots before passing the reins to Pearce Watling who sold the remaining lots.

The top price of the sale was achieved for just the second ram in the catalogue and was paid by Wandibirrup Grazing Co, Beaufort Vale, when Elders prime lamb specialist Michael O'Neill successfully bid $2250 for the ram.

The second top price of $1500 was reached twice, first paid by Elders, Narrogin agent Paul Keppel for the Watts family, Gnaring Pastoral Co, Wandering, for the ram in lot 12.

The Wandering enterprise operated throughout the entire sale and finished the day with a total of 10 rams at an average of $1222.

The Goss family went on to purchase four more rams, tallying five at an average of $1390.

Taylor Holdings Pty Ltd, Darkan, once again bought up big with Elders stud stock manager Tim Spicer securing 39 lots at an average of $814 on behalf of the enterprise to be the volume purchaser of the sale.

Stud principal Roz Cutherbert said she was very happy with how the sale went.

"There were a few return buyers who have been with us since the beginning when we started the stud in 1996," Ms Cuthbert said.

"As well as the regulars there were also a few new buyers, which was great to see.

"We had a brilliant season and we haven't had to feed any sheep since May so they were just paddock run rams."

Mr Watling said the rams were presented in top condition for sale and were very even from start to finish.

"The quality of the rams gave buyers plenty of opportunities to purchase throughout the whole sale," Mr Watling said.

"In the absence of three regular buyers there was opportunity for all buyers to fulfill their requirements at their budgets ensuring there was good buying support throughout the sale.

"Congratulations to Rob and Roz Cuthbert on a terrific sale and presentation of rams."