This year's competition attracted 103 bulls with 84 of them cleared under the hammer at public auctions. Sire Shootout winner Barronessa Holloway was originally bound for private sale but instead sold at the Rockhampton Brangus National for $23,000.

In a year when it felt like bulls needed little help in soaring to record levels, the entrants in ACM's Sire Shootout set the results bar even higher in 2021.

This year's competition attracted 103 bulls with 84 of them cleared under the hammer at public auctions to average $25,292, up on last year's 66 public auction bulls averaging $24,303.

The top price also climbed from $180,000 to $225,000 for Ben and Wendy Mayne's entry Texas Iceman R725 secured by Gloucester-based Macka's Angus for what was an Australian Angus record price at the time.

Despite evolving as a direct result of the cancellation of shows and sales following COVID-19 in 2020, ACM has announced the event will return for a third year in 2022.

Entries will open from May 26 to June 9 with the competition to air on the Facebook pages and websites of ACM's six agriculture mastheads across the country from June 28 to 30.

The competition will also welcome the inclusion of data sets during judging including estimated breeding values and raw scans, along with offering entrants the chance to showcase their animal from three video angles rather than just one.

For the second straight year in 2021, GDL were major partners of the competition pledging $10,000 in support.

GDL's Harvey Weyman-Jones said Sire Shootout offered great benefits for both bull breeders and buyers, with no limits on location.

"You don't have to win the competition to be in the game, all you have to do is be in it," he said.

"You are getting great exposure and some of the higher price bulls perhaps didn't earn a ribbon in the competition themselves but they came into their form at sale time after that exposure.

"We like this competition because it's all about marketing our client's cattle and allowing buyers to see what's coming up but we are also keen to put money back into the industry and the stud breeding industry."

Interestingly, again in 2021 it wasn't the Sire Shootout winner who brought the top money but the competition did aid as an important launchpad for Barronessa Holloway.

Initially entered for private sale, the strong interest in the Ultrablack bull after his win persuaded the Strazzeri family from the Atherton Tablelands to nominate the bull for the Rockhampton Brangus Sale where their draft of six bulls averaged $23,883.

Barronessa Holloway went on to sell for $23,000 to River Park Farms, Kenilworth.

Speaking on behalf of the stud, Jeff Strazzeri said they couldn't put a value on the level of exposure the competition offered.

"If you look at the actual follow up, the build up and all the online photos and stories; you couldn't put a value on that," he said.

"At the end of the day it's not a huge capital like going to a show when you have entry fees, transport and being with those animals. This only requires a bit of preparation and the videos.

"We usually sell 100 bulls every year by private treaty but that exposure with him means we only have six Brangus bulls we are holding for next year and apart from that we have only got young Charbrays."

Runner up 4 Ways MLR Qupid Q46E didn't get his Ekka berth but was still bound for the Queensland herd of Moongool Charolais, Yuleba, when they paid $52,500 through Elite Livestock Auctions.

This year Sire Shootout grew in every way; 21 more bulls competed from six states rather than four and viewers were up more than 3500 across Facebook and website platforms.

The viewers choice judging also attracted twice as many votes.

How the Sire Shootout winners sold 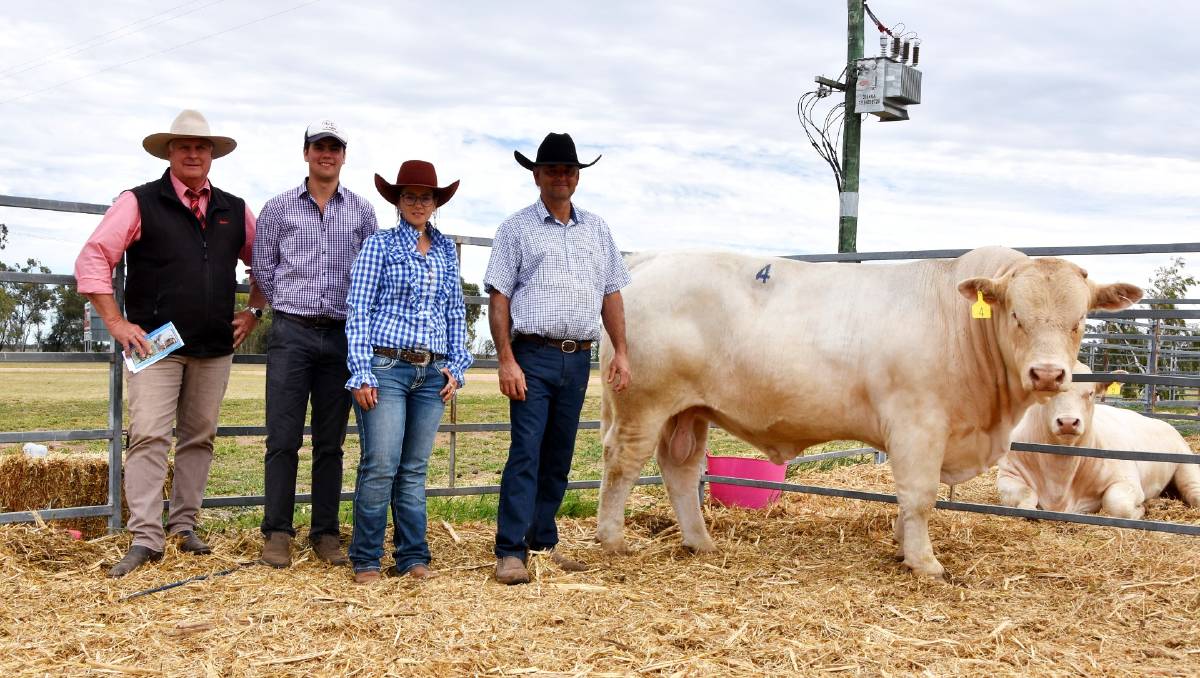 Runner-up 4 Ways Qupid sold for $52,500 to the Price family at Moongool Charolais and is pictured with Elders auctioneer Brian Wedemeyer and vendors Blake, Amy and David Whitechurch. Photo: Ben Harden Lolita and Trevor Ford, with kids Chloe, Liam, Samuel, and Daniel, and Wattlebray Pin Up, knocked down to Lauren Burn, Tasmania, for $35,000. Photo: Hayley Kennedy