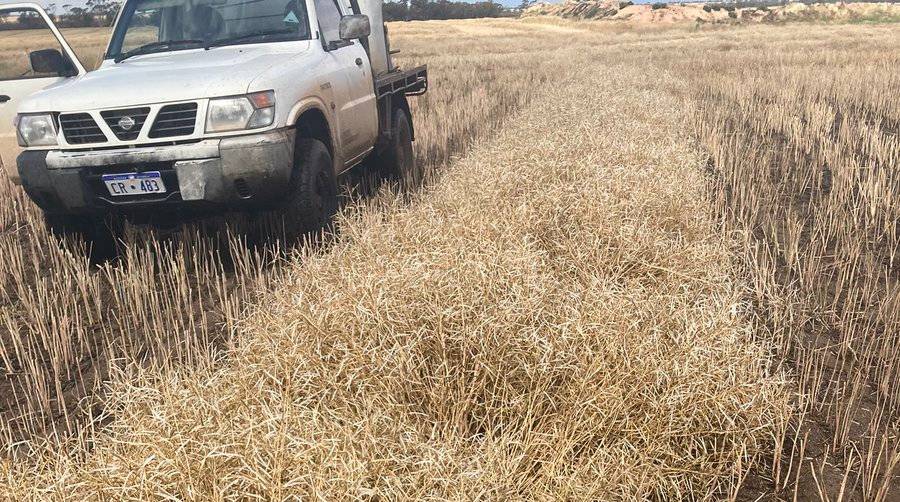 In Corrigin, mixed farmer Simon Wallwork seeded almost half of his program to canola this year, with three quarters of that getting some damage, ranging from 10 to 40pc.

Harvest plans for some WA farmers has been delayed after hail storms last week.

A COMPLEX weather system led to the formation of a series of hail storms that dumped enormous hail stones across Western Australia, South Australia and Victoria last week.

Bureau of Meteorology meteorologist Dean Narramore said the system was a cold front that then developed into a low pressure system over the Great Australian Bight as it interacted with tropical moisture from the north.

There were reports of crop damage across the three States following the hail, with some paddocks in WA expected to have more than 80 per cent yield loss.

Independent agronomist Michael Lamond said there were patches hard hit by hail, but that the wind was just as problematic.

"In particular in the canola we have seen some issues with the wind," Mr Lamond said.

"Overall, the damage has been patchy but there are certainly individual farms that have been hit hard."

He said the damage extended from Miling and Wongan Hills in the mid-north down into areas such as Corrigin in the heart of the Wheatbelt.

In Munglinup, cattle and cropping farmer Matthew Bell was lucky to be on the edge of the storm front, but he did have one canola paddock that copped a beating from the hail.

"We're waiting for the assessor to come and have a look to confirm it, but I'd say the damage is in the vicinity of 80 to 100pc," Mr Bell said.

"Insurance should cover all of the costs and what we would normally expect in terms of profit, but given canola prices are so high and it was probably going to yield slightly above what we initially estimated, it'll certainly take the cream off it for us.

"The paddock that was struck was about 50ha out of the 400ha we had planted, but one kilometre away on the same farm, the damage goes down to about 20pc, so we got off pretty lucky as we've got neighbours that lost hundreds and hundreds of hectares."

Having started harvesting the 800ha total program on Monday, Mr Bell is waiting for the canola to finish ripening again and is getting into the barley in the meantime.

"The canola was almost mature and our agronomist had said to start harvesting it a few days beyond the hail storm, but then that hit, so we're waiting for the assessor to have a look at it before we put the header in," he said.

"Overall harvest will probably take a bit longer than normal given it's been a bit wet and green still, so I expect we'll complete all of it by the second week of December.

"This isn't our first rodeo with hail damage as it's something that happens every few years and we just have to deal with it." 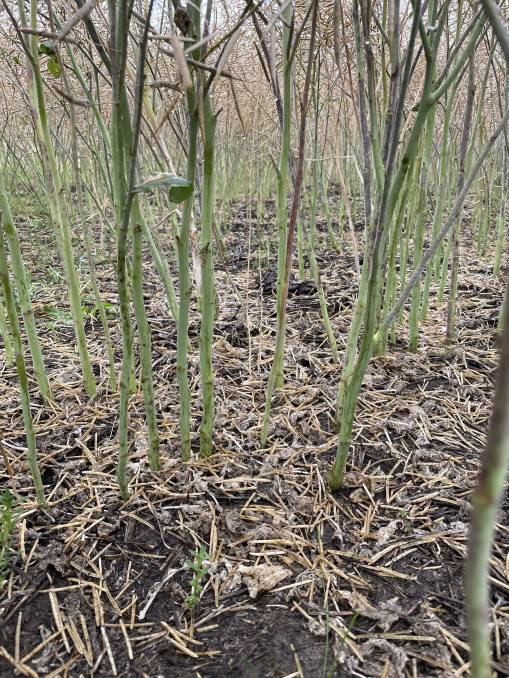 Munglinup cattle and cropping farmer Matthew Bell had one 50ha paddock of canola that copped damage between 80 and 100pc as a result of last week's hail storm.

Over in Corrigin, mixed farmer Simon Wallwork had seeded almost half of the program to canola this year, with three quarters of that getting some damage, ranging from 10 to 40pc.

"We started harvesting last Monday and had only done 30ha when the hail and rain came last Tuesday and Wednesday," Mr Wallwork said.

"We didn't restart until Sunday as we also had 22 millimetres of rain, so we're probably harvesting the worst of it at the moment and it's obviously not yielding what it should have - it was looking at going 1.4 tonnes per hectare, whereas now it's a bit below 1t/ha."

While for Mr Wallwork hail is not as devastating as frost, it is still disappointing given how good the canola was looking.

"It may be insured, but there is a 10pc excess which means the first 10pc of damage we don't get cover for, so that could mean a cost of some form, but I'm waiting for the assessor to let us know what he thinks," he said.

"We also miss out on the oil bonuses which would have been significant this year - it was 48 to 49pc oil which is worked out on a percentage of the price of canola, but you don't get that with the insurance pay out."

"It requires warm, humid air near the surface and cool air with strong winds in the upper levels of the atmosphere and for hail to grow to an exceptionally large size, larger than 10cm, it needs to spend longer growing," Dr Soderholm said.

"This occurs with just the right balance of the aforementioned conditions and when the parent hailstorm evolves in such a way that hail can grow for a longer time."

He said the areas that received big hail often did not have heavy rain associated with the hail.

"Strong winds inside a thunderstorm will blow raindrops further than the comparatively heavy hailstones - we call this precipitation sorting," Dr Soderholm said.

"As a result, the heaviest rain often falls from a different portion of a thunderstorm than the largest hail."

Over in South Australia, Murray Bridge farmer Garry Hansen said there were patchy strips of heavy hail throughout his area.

"People have taken footage from the air and you can see clearly where the crops have been hit," Mr Hansen said.

He said he had heard of reports of damage in parts of the lower Eyre Peninsula, the Yorke Peninsula and the Barossa Valley as well as in his own area.

Due to crop maturity he said in the Murray Bridge region the canola was worst hit.

"It is a little riper while the wheat still has plenty of green in it so it was not so rigid when the hail stones hit," Mr Hansen said.

"To the west of Kaniva there were big storms at Dinyarrak and to the east Tarranginnie was hard hit," Mr Bennett said.

He said his own crops had been damaged in places.

"We've had some pretty bad damage at an initial glance, we'll get the insurance assessor in and take a closer look, but at this stage it looks like some could have 30pc damage, with the barley seeming to fare worst of all."