Mr McCaffrey stands next to one of his works that was framed with the help of the Men's Shed, Kellerberrin.

Spanning over three floors, the collection of works was birthed as Robert J McCaffrey drilled into the lives of those who inspired him, leading to a diverse exhibition.

DEEP, rich and earthy colours, in a homage to the Wheatbelt, make an immediate impact as you first enter Robert J McCaffrey's solo exhibition on show until the end of October at the Perth Concert Hall.

The moody reds, brilliant greens and myriad of materials on display make up more than 200 works in the exhibition, aptly named Hommage, all of which have an emotional connection for the Kellerberrin artist.

Mr McCaffrey is a multi-disciplined artist, designer and TAFE lecturer, who has worked with many different mediums, including painting, collage, textiles and couture fashion, all of which feature in his current exhibition.

Spanning over three floors, the collection of works was birthed as Mr McCaffrey drilled into the lives of those who inspired him, leading to a diverse exhibition.

Utilising a variety of mediums, the pieces cover political, historical and emotional topics and although wildly different, they are linked via the thread of human experience and the artist's emotional response.

Starting on the first floor, the tour begins with the largest compilation of works, the Wiener Werkstatte collection.

It was inspired by the known and unknown artists who participated in the Vienna workshops between 1903 to when it closed in 1932.

Mr McCaffrey lights up as he recounts the backstory of each portrait, how each artist featured was inspired and then further influenced the next portrait in the collection.

"This collection (Wiener Werkstatte) is very interconnected and I've loved every minute of it," he said as he traversed down the grand walkway of the Perth Concert Hall.

Deciding what works to focus on is an intuitive process. Mr McCaffrey shares the story behind the image of the four girls that attended the Wiener Werkstatte workshops, which ran in Vienna from 1903 to 1932.

Collecting the biographies of artists, he often finds an emotive connection in their story, whether uplifting or destructive, these discoveries then reveal which artists to feature.

"I don't usually work on such a large collection, but these are so inspiring because the research took me into their private lives, which fascinates me," Mr McCaffrey said.

"There is all this connection you find, that they have with one another."

The connection that he speaks of continues all through his works and moving through the exhibition, each collection has a special story and significant meaning.

The Wheatbelt is a strong theme throughout a few of the collections and mirrors Mr McCaffrey's link to rural WA.

As a member of the Kellerberrin Community Med's Shed, Mr McCaffrey had two works framed with help from good friend and Men's Shed member Robert Watkins.

"They have been fantastic, I've had a ball in there," Mr McCaffrey said of the shed.

"My manager has joined now as well.

"I joined over eight months ago."

From his time spent in Maroomba, just outside of Kondinin, to an artist residency in Tasmania, there are many Australia-inspired works that reflect the land's changing colours, from deep red and orange with muted tones to the lush bright greens seen after the rain.

Not one to shy away from the political, Mr McCaffrey uses strong motifs and symbolism to acknowledge the genocide of indigenous people, the introduction of European culture and agricultural farming all within one striking collection.

Walking the fine line between abstract and realism, each piece leaves enough room for personal interpretation, while also being able to easily grasp elements of the artist's original intent for the pieces.

One motif that continued to emerge throughout the exhibition was that of the 'sacred heart'.

While originally a personal symbol for Mr McCaffrey, due to his Catholic upbringing, it took on a new meaning after spending 12 years on the Maroomba farm.

The passion in Mr McCaffrey's voice is clear as he tells stories of many of the works and his energy is scintillating as visitors trickle in.

He greets each one with warmth, many of them are old friends or students from his past thrilled to see this culmination of works, that not only pays homage to so many elements, but also is a homage to his creativity and diverse skill set.

The final collection strikes a special cord and it is the collection he wishes visitors to get the most from.

It is a homage to the minorities that suffered at the hand of the Nazi regime during World War II.

Visibly emotional and moved by this collection and the stories the pieces represent, Mr McCaffrey recounts the experiences of a few of the survivors and the coloured triangle system that was used to ostracise and separate them. 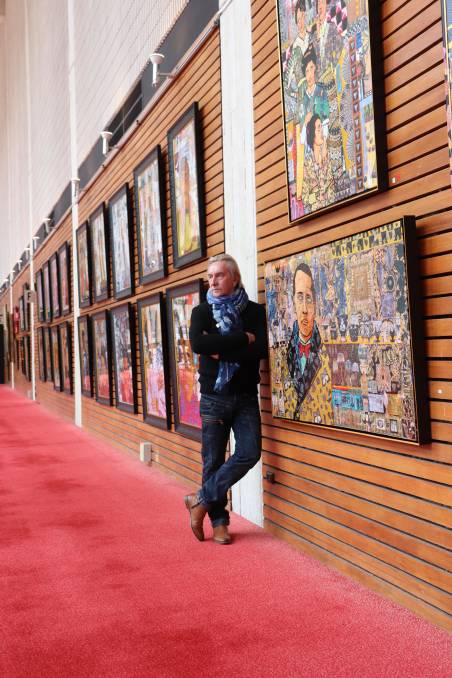 The pink triangle, heavily featured in each of the works, marked homosexual prisoners, who were imprisoned because of their sexuality and brutally treated.

"After the war when the gay people were liberated, a lot of them had to go back to prison because the law said they were deviants and so had to carry out the rest of their sentence," he said.

"So many of them didn't tell their story because they were afraid of being persecuted again when they got out, so a lot remained silent for many, many years.

"These works are a homage to their stories."

This collection, a beautiful finish to the tour speaks to the heart of Mr McCaffrey, a man who sees the beauty and pain in both history and the present day.

The culmination of works has been a while in the making and is a dream come true for the artist to hold an exhibition of this magnitude in the concert hall.

Come and take a wonder through the heart beat of this man.