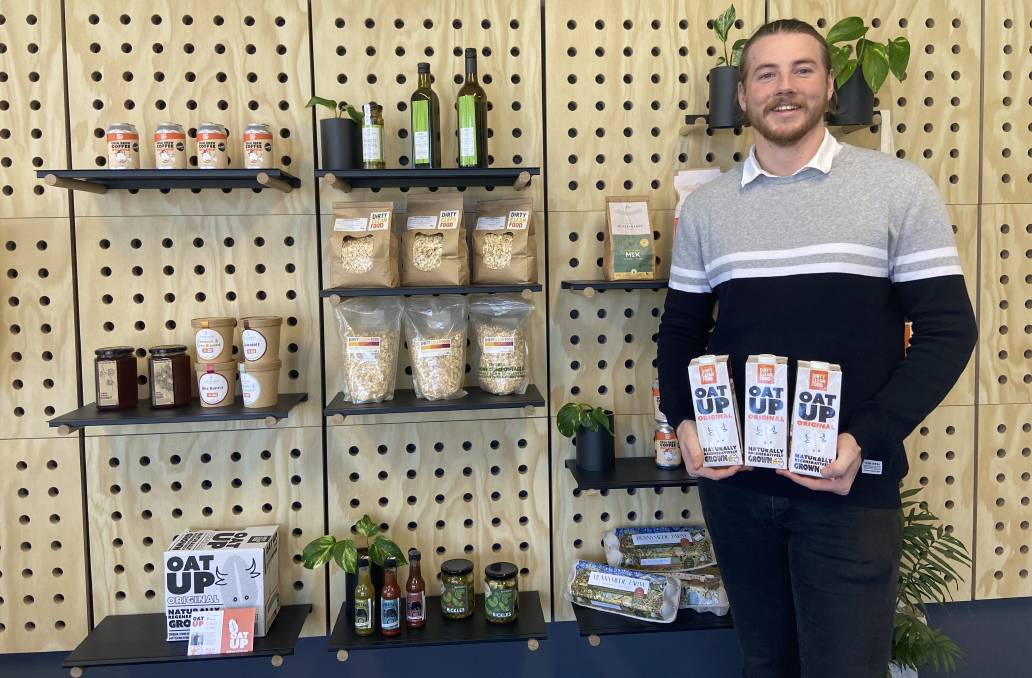 Having grown up on a farm at Lake Grace, Peter Donwey has always had a passion for agriculture. Working for Wide Open Agriculture as a product analyst, he has been enjoying learning more about what happens behind-the-scenes of an innovative agribusiness and the supply chain.

Peter Downey's passion for agriculture started from an early age.

WHEN Peter Downey took a job as a casual warehouse employee in 2019 at Dirty Clean Food (DCF) while at university, he had no idea that he was already laying the foundation for his career.

Rather than trying to sell himself based on his previous warehouse experience, all Mr Downey could talk about during the interview was his interest in the company and asking his own questions.

DCF is Wide Open Agriculture's (WOA) food brand and Mr Downey soon found himself working more in the WOA business and, after completing his agribusiness studies, stepped into his current position as a product analyst.

"My day-to-day involves inventory forecasting and making sure that we have all of the correct volumes of stock from our suppliers and also customer analysis work - so looking at what our customers want and why," Mr Downey said.

"That's what my role began as but now it's only a small part, due to the way that WOA has grown so rapidly - we are constantly finding new challenges to overcome to be able to continue moving forward, this means that I am always having to adapt my role to embrace new tasks."

Mr Downey was there to experience WOA's rapid growth, which saw the company outgrow its warehouse.

"I got a chance to design and develop a new warehouse, which involved finding the right location for us, trying to decide how much space we needed for our growth to continue over the next three years," he said.

"More recently, internally we're deciding whether our inventory management software is the right one for us, we have done a review of the system and have found that it is not well designed for meat processing and so we are looking for more purpose-built alternatives.

"The growth of the business has been exciting and great to be a part of, but also the culture of the business is fantastic, the team is so supportive and promotes everyone coming through."

Mr Downey's passion for agriculture started from an early age.

Originally from England, at age four Mr Downey, with his brothers Fergus and Jack and parents Shaun and Yvette, emigrated to WA in search of farmland as their home country was too expensive, settling at Lake Grace.

"Growing up on the farm, agriculture has always been a passion of mine," he said.

"Every harvest I was always helping out, it was exciting.

"During school I would love when we'd get the chance to take a day off to help out around the farm.

"At boarding school I was around other people who come from the country, which I think embedded those country roots."

Mr Downey potentially sees himself returning to the farm one day, but first gaining skills and experience in the broader agricultural industry is important to him.

"Although the farm is there and is something that I'd like to go back to, I'm not quite ready to yet," he said.

"I want to develop my career more in this space and then I'll see where it goes.

"This summer I plan to work on the farm on the weekends, as I still have a strong connection to home, like most country people do - so I won't say no to the farm, as I'm taking up any opportunity I can get in the city for now."

By embracing as many opportunities as he can and learning from those at WOA, Mr Downey hopes that if he does eventually return to the farm, he would have a plethora of skills, knowledge and experience that could be used in the family business.

"I believe I'll be able to learn the physical skills of farming from my dad, but the business side is a bigger challenge and is taking over more of the agricultural industry," he said.

"So understanding the business side of WOA and then being able to apply that to the home farm would be amazing."

Mr Downey hasn't wasted time in learning the business and has seen WOA grow rapidly - in March 2020 the online business grew by more than 800 per cent in two days.

"With COVID, customers started to change the way they thought about food - they wanted to understand more about where their food came from," he said.

"From there we've seen continued growth.

"Because we offer not just great food, but a story behind it, consumers can find information on our suppliers through our website - who they are buying from, where it's come from and what practices were used to produce the food.

"Our returning customer rate is about 35pc, which is slightly above the average for e-commerce sites."

WOA is one of WA's leading regenerative farming companies and, subsequently DCF is one of WA's most well-known sustainable food brands among consumers and the hospitality industry.

"I think sustainable and regenerative farming has to be the future of agriculture," Mr Downey said.

"We have to be working towards putting more into the land than what we get from it and making sure that it's viable for years to come."

One of WOA's recent developments was the release of the world's first regenerative and carbon neutral oat milk, OatUP.

OatUP is produced in Italy as there are no local facilities, but Mr Downey said the company was planning to establish production in Australia.

"When we decide to bring the oat milk processing facility to Australia, I want to be involved in how we design it, what the layout would be, where's the best place location for it - should it be in the city for consistent labor or closer to the country for easier supply of oats?" he said.

"There are many questions we still haven't worked out, but I look forward to being a part of it.

"I think trying to figure all that out will be an awesome experience."

Mr Downey also wants to be involved in the company's lupin project as it further develops.

WOA has been working with Curtin University to unlock the protein in lupins so that it can be more easily added to plant-based foods, including its oat milk and udon noodles.

Mr Downey said this was an exciting project as it was taking an underutilised crop that is in most farming systems and adding more value to it with a bigger market for human food consumption.

"So it would be competing with the soy industry, for example, but it's grown in WA without irrigation and is a nitrogen fixing plant and just generally good for agricultural businesses.

"For example, this year there is a lot of livestock feed on the ground from the good rainfall throughout the season, so there is much less demand for lupins for livestock feed, whereas this would give farmers another market for their lupins."

Working for a company that is at the forefront of change, Mr Downey said one of the key challenges for agriculture in Australia could be the industry's resistance to embracing change.

"As a young person, I don't entirely know how much change has been embraced over time, but I think the conventional farm method is successful and somewhat sustainable, but not entirely for the long run," he said.

"It's something that will have to keep evolving, improving and that element of change is sometimes frightening to some people, but it's needed to happen for the Australian agricultural system to keep developing and improving."

Food security and food waste was another issue that Mr Downey believed could be a challenge for the industry into the future.

"A lot of food goes to waste in a lot of areas where it shouldn't and that will be a challenge unless we are able to improve on it," he said.