With the weather drying out from now until Monday, we should be seeing average rainfall and a return to the dry summer we are used to for the rest of the year. 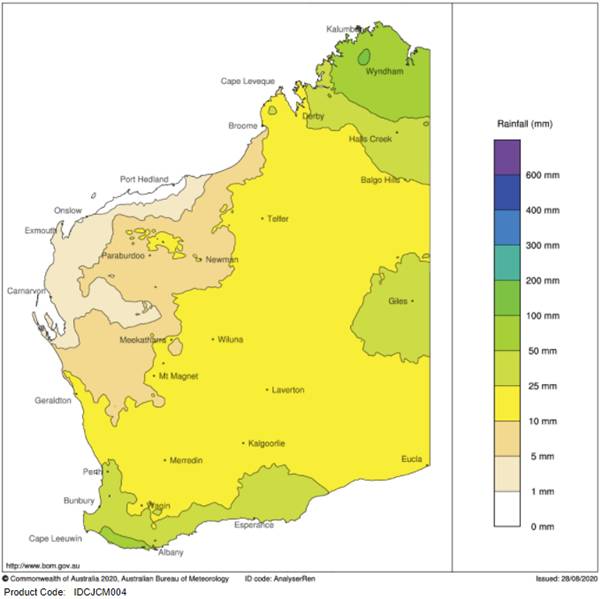 Some areas of the Central Wheatbelt have seen between 25 and 50 millimetres of rain this past week causing many farmers to delay harvest yet again, but the silver lining is starting to appear from behind the clouds.

With the weather drying out from now until Monday, we should be seeing average rainfall and a return to the dry summer we are used to for the rest of the year.

"There is no strong signal that we will have wetter than normal conditions between now and the end of the year, so it should be average type conditions which are relatively dry for this time of year,'' said Bureau of Meteorology Western Australia manager James Ashley.

Weather systems should return to normal for this time of year, Mr Ashley explained, including the thunderstorms we may start seeing early next week.

"By early next week we will fall into a thunderstorm situation with a deep trough, particularly in the eastern parts of the wheatbelt, which is typical for this time of year, however we are not expecting, at this range, massive rainfall totals out of them," he said.

There are currently no rainfall signals for December, which according to Mr Ashley is a good sign.

"November will end up with well above average rainfall, but that's because it's already happened, for late November and December there are no strong signals for wetter conditions than normal," he said.

"Those sorts of signals can be amplified, so the fact that there aren't any gives us some confidence that it's unlikely we'll get significantly wetter than normal conditions."

A main climate driver this summer is the El Nio-Southern Oscillation whose current outlook is at La Nia ALERT.

"That means there is a greater than 70 per cent chance that we'll go into a La Nina event, which creates average to above average rainfall in the top half of the state and in the eastern states, which is what we had last season (Summer 2020)," he said.

"A La Nina event will also mean an early start to the tropical cyclone season and more tropical systems than normal."

However if we move into a La Nina event, that won't necessarily mean rainfall for all of WA.

"Rainfall across summer will all depend on where tropical systems go," he said.

"These tropical systems are the main things that give us the flooding and the heavy rainfalls.

"I would expect to see a decent wet season, average to above average wet season rainfall towards the top half of the state and the southern half typically dry across summer.

"The only real way we would get really heavy rainfall in the southern half is if any tropical systems come southwards.

"There were a couple of events last season which generated a fair bit of rainfall throughout the south west of the state and we ended up with above average summer rainfall because of those one or two systems,'' he said.

All this results in hopefully good news for farmers, who can try and get back on schedule with harvesting, putting an end to what has been an unusual year of weather.