Right through the season stud breeders achieved new benchmarks for their studs whether it be a top price value or a record average as buyers went to never before seen levels at ram sales in WA. 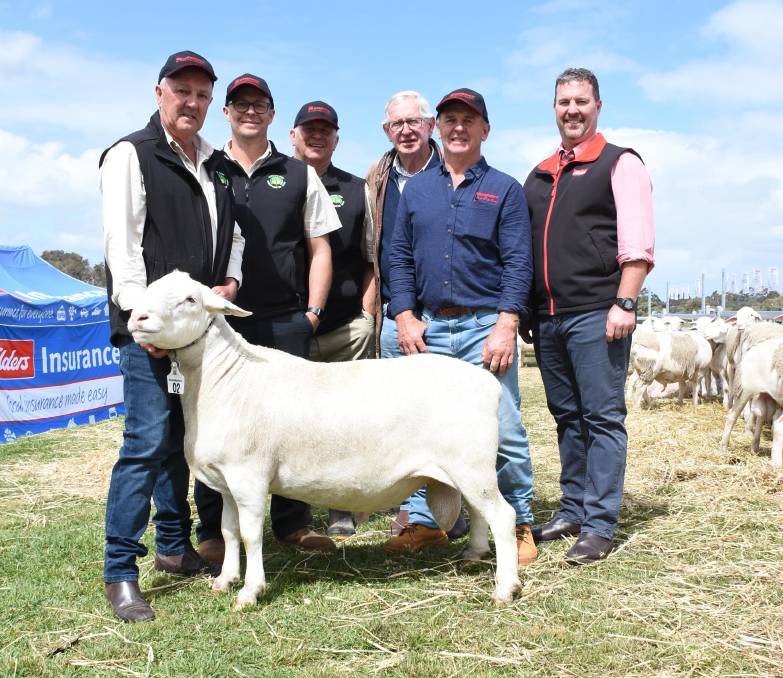 Prices hit a top of $90,000 this ram selling season for this SheepMaster ram offered by the SheepMaster parent stud, White Dog Lane, Elleker at last week's National SheepMaster ram sale at Elleker, making it the highest priced WA-bred ram of any breed sold at auction in WA since 1991. It was purchased by the Reed and Crabb family, Rainbows Rest stud, Dongara and Walkaway. With the ram were buyers Geoff Crabb (left) and Tristan and Des Reed, White Dog Lane stud's Neil Garnett and Brian Prater and Elders auctioneer Nathan King.

IT was the case of another sale and another record during this year's ram selling season.

Right through the season stud breeders achieved new benchmarks for their studs whether it be a top price value or a record average as buyers went to never before seen levels at ram sales in WA.

With water in dams, feed in the paddocks, continued strong sheep and lamb markets and improved wool prices from 12 months ago, producers had plenty of enthusiasm when it came to their sheep enterprise as they lined up at rams sales in 2021.

This enthusiasm, combined with faith in the sheep and wool industries staying strong for years to come, meant buyers were much stronger in their bidding compared to last year in terms of what they were prepared to pay and the numbers they wanted, which resulted in both prices and the number of rams sold being up.

The season average across all breeds this year finished at $1761, ranking it as the best on record, while the $90,000 top price for the season paid for a SheepMaster ram, was the highest price paid for a WA-bred ram of any breed at auction in WA since 1991.

The previous best price was $110,500 for a Lewisdale ram sold at the Katanning stud ram sale.

The result this year was somewhat surprising given the number of ewes which have been offloaded to the Eastern States in the past couple of years.

As a consequence of this exodus, one would have assumed there would again be less demand for rams sold in WA this year, but it wasn't the case.

With strong commodity prices for wool and sheepmeat, producers showed at ram sales this season they were certainly focused on rebuilding their flocks on the back of the good season which started with an early break and then was followed up with good winter rains.

The main driving factor in the confidence of buyers at ram sales again this year was the record sheep and lamb prices which have been achieved over the past 12 months.

Again over the past 12 months producers have regularly seen prices surpass $200 for lambs and mutton.

The WA heavy lamb indicator sat above 720 cents a kilogram carcase weight (CWT) from late March through to the end of September, while the trade lamb indicator has mostly been above 700c/kg CWT since late February.

Prices this year for lambs peaked in late July/early August and as a result producers regularly saw heavy, old season lambs make more than $200 a head through July and August.

At the start of the selling season prices were well up on 2020 in WA saleyards for lamb and mutton.

Mutton has also been strong again over the past 12 months and WA producers saw a record price of $291 achieved by heavy ewes at Katanning on August 18.

From the beginning of June through to the end of August, the WA saleyard indicator for mutton (18-24kg CWT), fluctuated between 550c/kg CWT up to a high of 621.74c/kg CWT, which was recorded on August 3 by MLA.

Since then the mutton market has come off slightly and in MLA's sheep and lamb indicator report (for the week ending August 24), mutton (18-24kg CWT) was reported at 598c/kg CWT, up on last year's figure at the same time of 484c/kg CWT, while in the same report last week (week ending November 2) it reported mutton at 565c/kg CWT which is up 80c/kg.

Like trade sheep prices, prices at this year's spring ewe sales were again strong but unlike last year it wasn't Eastern States' buyers driving prices it was local buyers on the back of a very good season (wet winter) across most of the agricultural regions which has put water in dams and feed in paddocks.

Also the significant increase in the price of fertiliser and chemicals has also made producers look at their cropping programs for next year and keep their unproductive cropping paddocks in pasture for the year.

Following on from the strong values of the past three years, Merino ewe prices this year continued to strengthen with prices peaking at $298 in the Nutrien Livestock Merredin, Corrigin and Wickepin ewe sale.

But this wasn't the only sale where Merino ewes sold for more than $220, all the sales saw top prices of more than $220 and the Merino ewe offerings at the sales held so far this season have averaged between $197 and $234, to be up on last year.

But it wasn't only Merino ewes which have sold to high prices, shedding ewes have also been in demand selling to $1265 for UltraWhite ewes.

The wool market has also provided producers with hope again over the past 12 months.

After falling away to its lowest levels since 2012 when ram sales kicked off last year, the wool market has lifted a significant amount over the past 12 months albeit in an up and down way.

In comparison, in the same week last year the EMI was at 858c/kg clean and the WMI 895c/kg.

When wool sales were completed last week the WMI was at 1402c/kg, which is the highest it has been since the third sale of the season in Fremantle in the second week of August and up 185c/kg on last year.

During September/October a bale of the same description was worth $1580 compared to $1258 in September and $1445 in October last year.

So with a number of factors playing on producers' minds from good sheep and lamb prices, an improved wool market, paddocks full of feed and water, higher fertiliser prices, the continued mulesing debate, difficulty getting shearers, producers had plenty to think about leading into this year's ram selling season.

And when you look at the final ram sale figures there is no doubt these factors had an impact on producers buying decisions from what they were willing to pay, to how many rams they wanted and what type of rams they purchased.

In terms of gross revenue, this year ranks as the largest, the first time the figure has surpassed the $25 million mark.

Also in this sale a ram sold for $85,000 while at the Hillcroft Farms UltraWhite sale at Popanyinning, a ram made $51,500 to complete the top three prices for the year, showing the growing interest in shedding breeds due to their easy-care and high fertility traits.

As well as topping the top price list this year the shedding breeds (UltraWhite, Sheepmaster, Kojak, Australian White and Western Whites), also came out on top in the average stakes achieving an average of $3477, with SheepMasters the best performing with an average of $5653 for 98 rams sold from 99 offered.

When it came to an improvement in averages this year, the biggest lift was recorded by the White Dorper and Dorper breeds which saw a rise of $524, which was followed by the shedding breeds and Merinos which achieved a lifts of $480 and $338 respectively.

With the total number of rams offered and sold up on last year the majority of breeds offered saw an increase in these numbers.

The Merino breed saw the biggest rise in the number of rams sold compared to last season with breeders selling an extra 459 Merino sires, the next biggest rise was 381 for the British and Australasian breeds, while the shedding breeds sold an additional 149 rams.

In terms of market share the Merinos held 59pc of the market this year for rams sold, which was back 1pc on last year.

The British and Australasian breeds market share for rams sold was up 1pc on 2020 at 29pc.

When the British and Australasian breeds market share is broken down for rams sold, White Suffolks and Poll Dorsets sit at 16pc and 8pc, making them the next biggest breeds sold behind Merinos.

The Dohne and Prime SAMM breeds recorded a market share of 5pc and 2pc respectively on the number of rams sold, the same as last year, while the market share for the shedding breeds on rams sold finished at 4pc up one point on last year.

But when you look at the market share for the breeds on the gross figures Merinos recorded a figure of 63pc which was the same as 2020, British and Australasian breeds commanded 22pc, up two points (White Suffolks 12pc and Poll Dorsets 6pc), Dohnes 4pc, Prime SAMMs 2pc with the shedding breeds and White Dorpers/Dorpers at 7pc and 2pc respectively.

The Merino, White Suffolk and Poll Dorset breeds were the only individual breeds to surpass the $1 million gross figure this season, while the shedding breeds combined surpassed it again as well.

Merinos again clearly topped the gross figures for the season with their sales grossing more than $16.159 million.