With the wool market in a more positive position compared to last year, along with feed and water in the paddocks, producers were more confident in their bidding.

AFTER a tougher selling season last year, Merinos bounced back with vengeance at ram sales this year to sell for a record average of $1887 to put a smile back on the face of Merino stud breeders across WA.

With the wool market in a more positive position compared to last year, along with feed and water in the paddocks, producers were more confident in their bidding.

As a result of this improved confidence all the important figures across the board - number of rams sold, average and gross were up on last year when the wool market was at its lowest levels since 2012.

Not only were the overall gross figure of more than $16.159 million and average figure of $1887 up on last year, they also smashed the previous best figures set for the breed in 2018, setting a new benchmark for Merino sales in the State.

With the wool market up significantly on 2020 levels it certainly provided more confidence to buyers at Merino ram sales this year.

When sales got underway at the beginning of September, the wool market was up more than 50 per cent on last year.

But it wasn't only the recovery of the wool market which provided producers with added incentive to bid strongly at Merino sales, the record returns they have seen for not just mutton and lamb but also breeding ewes were also a driving factor.

Prices at spring sheep sales this year again continued to strengthen but this year it wasn't on the back of strong Eastern States' demand but rather local demand.

In these sales Merino ewe prices peaked at $298 in the Nutrien Livestock Merredin, Corrigin and Wickepin ewe sale for a line of 1.5-year-old ewes, while the sales which included both ewes and lambs averaged between $175 to $234.

So with all the positives in the industry buyers showed they were very keen to bid strongly on the rams they really wanted to further improve their genetic programs and this lifted both prices and clearances across nearly all sales.

During Merino and Poll Merino sales this year a total of 9210 rams were offered at 74 sales, broken into 64 single vendor sales and 10 multi-vendor sales and 8563 of these rams sold under the hammer.

Like the gross figure and the clearance rate there was also a rise in the overall average for Merino sales.

Looking back over the results since 1996 the Merino has lost market share with the introduction of numerous other breeds to the industry but it still remains the most dominant breed.

The market share for Merinos for the number of rams sold this year was 59pc, which was down one point on 2020, while in terms of the gross figure the Merino breed held 63pc of the market, which was the same as last year.

The more than $16m gross figure achieved this year, ranks as the second largest ever recorded for the breed.

The strong season result was no doubt built around the top end of the market, which was very impressive as buyers were prepared to pay top dollar for top rams to improve their breeding programs.

Prices for the season topped at $51,000, for a two-tooth Poll Merino sire sold by the Gooding and Robinson families' East Mundalla stud, Tarin Rock, at the Rabobank WA Sheep Expo & Ram Sale at Katanning in August.

The March shorn youngster was purchased by the House family, Barloo and Willemenup studs, Gnowangerup, while the underbidder was the Crichton Vale stud, Narembeen.

The ET-bred 143 kilogram ram was by East Mundalla Masterbuild 53 and out of East Mundalla 28, which is a daughter of Oakbank 44 Imperial 111-39.

The price tag of $51,000 is the highest value paid for a Merino ram in WA since 2016 when the East Mundalla stud sold a sire at its on-property sale for $57,000, while it was the highest price paid at the Katanning sale in two decades.

The next best price was $37,000 achieved by the Thompson family's Moojepin stud, Katanning, when it sold a two-tooth Poll Merino for this value at its on-property sale to the Kerin Poll Merino stud, Yeoval, New South Wales. 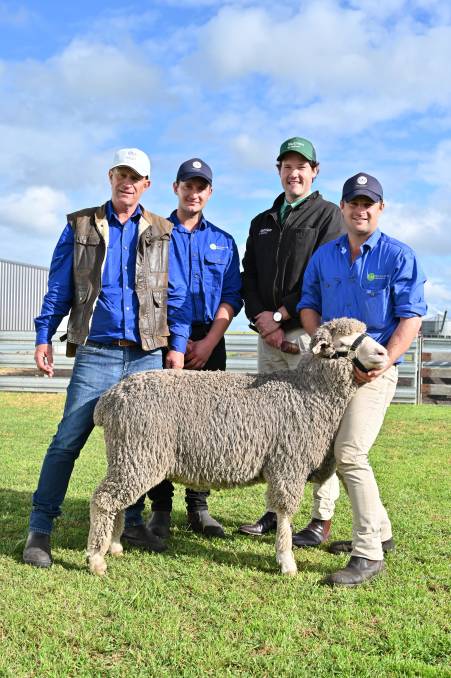 The third top price was $30,000 and this was recorded by the Button family's Manunda stud, Tammin, at the Rabobank WA Sheep Expo & Ram Sale at Katanning.

The four-tooth, full-wool Poll Merino sire was purchased by the Campbell family, Coromandel stud, Gairdner and the Griffiths family, Canowie Fields stud, Gairdner, with a semen share going to the Rothbury stud, Tenterden.

The fourth highest price was $26,000 for a two-tooth Poll Merino sold at the Anderson family's Anderson Rams on-property ram sale which sold to the O'Connor family, Oxton Park, Harden, NSW.

The top price for a Merino ram was $15,500 paid for a two-tooth ram from the Norrish family's Angenup stud, Kojonup, at their on-property sale by commercial producer Tom Marshall, Cranbrook. The top-priced Merino ram for the season was sold by the Norrish family's Angenup stud, Kojonup, when they sold this two-tooth Merino sire at the stud's on-property ram sale for $15,500 to by TG Marshall, Cranbrook. With the ram were Angenup co-principal Gavin Norrish (left), buyers Jeff Pope and Tom Marshall, Elders south area manager Matt Ericsson and Angenup co-principal Rod Norrish.

The Norrish family in their on-property sale also sold a Poll Merino ram at $20,000.

Along with the strong sale prices there were also a number of high priced private sales during the year and the biggest of these was $40,000 for a March-shorn, two-tooth Poll Merino sire, sold by the Hobley family, Wiringa Park stud, Nyabing, to the Pyramid Poll stud and Woodyarrup stud.

The sale was negotiated at the Rabobank WA Sheep Expo & Ram Sale at Katanning.

Also at Katanning it was announced the Rangeview stud, Darkan, had negotiated the private sale of a four-tooth, August shorn Poll Merino ram for $15,000 to Ashley Wilson, Yass, New South Wales.

Like the number of rams sold this year, the average and gross figures for single vendor sales rose.

At these values this year's gross and average rank as the best on record for single vendor sales, breaking the previous records set in 2018 where the sales grossed $14,059,170 and averaged $1813.

In the single vendor offerings, Anderson Rams for a second year running, took the honour of recording the best average when it offered and sold 174 rams at an average of $3961, ranking it as the best ever average recorded at a single vendor Merino ram sale in WA.

Fifty five single vendor sales (or 85pc) saw a lift in average and these rises ranged between $18 and $1524.

Recording the largest jump in average was Anderson Rams, which recorded the $1524 increase.

The Ledwith family with its Kolindale, Lewisdale-Corrigin, Eastville and Wanjalonar ram sales, again presented the largest offering of rams to buyers, cataloguing a whopping 669 rams and selling 632 at three different sales.

It offered 330 and sold 325 at its on-property Kolindale sale, which was the biggest offering this year at a single sale, while at its Lewisale-Corrigin, Eastville and Wanjalonar on-property sale it cleared 225 head from an offering of 255, ranking it as the fourth biggest of the season.

The Ledwith family's third sale for the year was their Kolindale Esperance sale and in it they sold 82 from 84 offered.

The second biggest sale in terms of numbers after the Kolindale on-property sale was the Barloo/Willemenup sale and in this fixture the House family offered 318 rams from its two studs and sold 306.

This season there were 1022 rams offered under the hammer at 10 multi-vendor ram sales, which was back 71 head and of these 917 sold, up 46 head on last season.

There were five sales where the same number or more rams were offered this year compared to 2020, while in eight sales the number of rams sold was either more or equal to 2020.

In comparison to last season the average was up an impressive $416 on last year's figure of $1281.

It was no surprise the highest multi-vendor sale average was chalked up at the Rabobank WA Sheep Expo & Sale at Katanning when it realised a sale record $13,156 over the 16 rams sold from the 23 offered, which included both four-tooth and two-tooth rams.

Nine of the 10 multi-vendor sales posted an increase in average compared to 2020 and these rises ranged from $135 to the biggest increase of $3356 recorded at the Rabobank WA Sheep Expo & Ram Sale.

It's a hard task to achieve a total clearance and this year only one sale did - Chapman Valley, while there were five sales, which achieved a 90pc or better clearance - Merredin and Wongan Hills (94); Northampton (93); Esperance (92) and Williams (90).

There were 22 studs to offer rams at multi-vendor ram sales (excluding the Rabobank WA Sheep Expo & Ram Sale) this year and five of them achieved a total clearance.

Those to achieve a total clearance were Toorackie (55) at Williams; Westwood (46) at Esperance; Wynarling (38) at Chapman Valley plus Mulga Springs (20) and Lyndale (14) at Northampton.

The largest yarding of rams at a multi-vendor fixture was at the Esperance Breeders' ram sale where 198 rams were offered and 182 sold.

In comparison last season there was one sale to gross more than $200,000.