Unlike last year when more than half of the yarding headed across the border to the Eastern States, this year it was local WA buyers, who were looking for replacement ewes or an extra mob to mate, that dominated the buying list securing all but four lines.

THE run of strong spring sheep sales continued at Narrogin when Nutrien Livestock hosted its annual Narrogin ewe and wether lamb sale where prices topped at $244 for 4.5-year-old ewes and young maiden ewes made to a high of $228.

In the sale the Nutrien Livestock team, led by sale co-ordinator and Narrogin agent Ashley Lock, presented a quality yarding of 7958 ewes and lambs, made up predominantly of spring shorn maiden purple tag and mature black tag ewes, as well as a good run of wether lambs from the local and surrounding areas.

With the support from a good crowd of local buyers from the area and a strong representation from the Nutrien Livestock network, auctioneer Mark Warren had no problem finding new homes for the lines on offer at an overall average of $175 across all descriptions.

Unlike last year when more than half of the yarding headed across the border to the Eastern States, this year it was local WA buyers, who were looking for replacement ewes or an extra mob to mate, that dominated the buying list securing all but four lines.

The ewe prices achieved were very similar to last year's sale where 4389 1.5 to 5.5yo ewes averaged $203, while the prices for wether lambs was up significantly compared to last year's average of $115 for the 1556 head sold.

The lines of maiden ewes may have dominated the yarding but it was the proven breeders which created the most interest among the buyers and achieved the top prices.

Leading the way in these lines was a draft of 410 September shorn, Hyfield blood, 4.5yo ewes offered by the Rhodes family, TJ & ME Rhodes & Sons, Narrogin.

Mr Warren took an opening bid of $180 on the well-grown, genuine line of ewes, which were on the market as a result of the Rhodes family downsizing their operation and from there the buyers jumped in and quickly pushed the price above the $200 barrier.

Eventually the ewes, which achieved a 114 per cent lambing in 2021, were knocked down at the day's $244 top price to the Lavender family, Lavender Farm Co, Williams, who bought with the support of Elders, Williams agent Graeme Alexander.

Buyer Wes Lavender said the ewes came recommended to them by Kevin Broad, Elders stud stock, who classes for both them and the Rhodes.

"We are looking to join more ewes this year as we have plenty of feed and these fitted the bill in terms of what we wanted."

The Lavenders will join the ewes to Merino rams this season.

The second top-price for the sale was $232 and it was also achieved for a line of 4.5yo ewes. 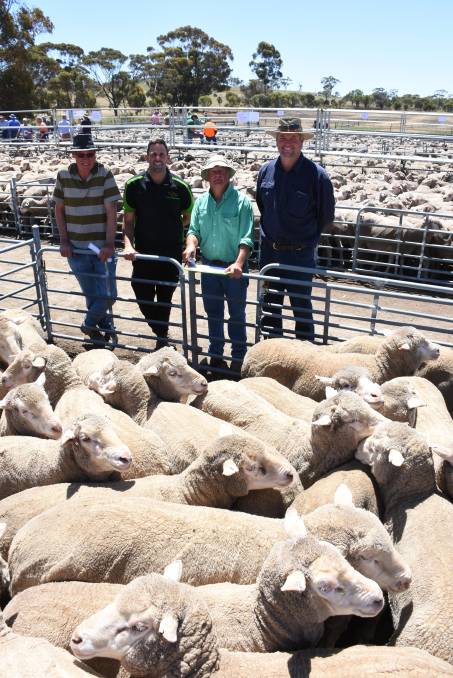 Achieving the price was a draft of 318 August shorn, Navanvale blood ewes offered by RJ Rowe & Co, Boundain, when it was knocked down to the Eckersley family, RA & JM Eckersley, Narrogin.

John Eckersley said they purchased the ewes as replacement breeders for their prime lamb enterprise in which they join 1100 ewes to White Suffolk rams.

Taking the $228 top price honour in the run was the first line offered in the sale.

Bidding kicked off at $200 on the line of 302 September shorn, Woolkabin blood, genuine ewes from TJ & ME Rhodes & Sons and when it finished at $228, it was Carlton Springs, Narrogin, which was written down as the buyer.

Mr Lock, who was buying over the phone for Nutrien Ag Solutions, Echuca, Victoria, purchased the next three lines of 1.5yo ewes for the Eastern States' order. The Wiese family, RL & CM Wiese, Highbury, offered two lines of 1.5yo ewes in the sale which were October shorn and based on Anderson Rams and Centre Plus bloodlines.

The Highbury producers Perrin and Gayelle Quartermaine, PT & GJ Quartermaine picked up the first line of 336 head at $198, while the second line of 254 head sold at $152 to Ken and Dean Hart, KP & CM Hart, Narrogin.

The 5.5yo proven breeders were keenly sought after by buyers and again topping these lines at $212 was a draft from TJ & ME Rhodes & Sons.

Nutrien Livestock, Wickepin/Kulin agent Ty Miller also wasn't afraid to bid up on the 5.5yo ewes when purchasing two lines for a Kulin operation.

Mr Alexander, who had earlier helped the Lavenders secure the day's top-priced line, was active in the 5.5yo ewes as he tried to purchase replacement ewes for Williams-based prime lamb enterprises and he was successful finishing the run with three lines to his name.

The third line he purchased was written into the sheets at $190 and consisted of 176 October shorn, Darijon blood ewes from R & R Stott.

There was only one line of ewe lambs offered and the draft of 432 unshorn, Eastville Park ewe lambs from Taarblin Farms Pty Ltd, Wickepin, sold at $122 to Mr Lock for his Nutrien Ag Solutions, Echuca account.

The sale rounded out with an impressive run of shorn and unshorn wether lambs which topped at $148 for 476 Woolkabin blood, September shorn wethers from TJ & ME Rhodes & Sons, when they sold to Graeme Manton, Colorado Farms, Yealering.

After purchasing ewes for a Kulin client Mr Miller was also an active buyer in the wether lambs, bidding to $146 on behalf of PJ Ellis & Co, Kulin, for 448 Darijon blood, October shorn wethers from RA & JM Eckersley.

A run of 305 October shorn, Navanvale blood wether lambs from RJ Rowe & Co also made $146 selling to a Williams buyer operating through AuctionsPlus.