Some of the 110 Angus-Friesian heifers to be offered by long-time volume sale vendors Keith and Alison Jilley, KL & AJ Jilley, Boyanup, at the Elders Supreme Springing Heifer Sale next month. The Jilley's heifers are PTIC to Limousin bulls and due to calve from February 1, 2022, for 11 weeks. Angus-Friesian heifers will make up 86 per cent or 667 head of the total catalogue of 776 PTIC first cross heifers nominated for the sale.

The Elders Supreme Springing Heifer sale is one of the first female sales this selling season and one of the marquee cattle sale events in the South West for baby beef producers to source A-grade replacement first-cross breeders.

WITH the female selling season about to start, it's time to start thinking about sourcing replacement breeders for your herd.

The Elders Supreme Springing Heifer sale is one of the first female sales this selling season and one of the marquee cattle sale events in the South West for baby beef producers to source A-grade replacement first-cross breeders.

This year's sale will be held on Friday, December 10, commencing at 11.30am at the Boyanup saleyards and will feature another quality catalogue of first-cross females.

The Elders South West network has nominated 776 PTIC first-cross heifers, which have been handpicked from astute vendors, ensuring the sale maintains its reputation of offering the best quality first-cross females.

All heifers are out of dairy dams and carry a vendor guarantee for a maximum 10-week joining period and a maximum calving period of 12 weeks.

The heifers are also pregnancy tested in calf by a veterinarian to be due not before November 1 and are accompanied by a pregnancy certificate and for the third year in a row, all heifers will again be ear notch tested free from persistent infection (PI) of Pestivirus.

Mr Carroll said there would be another large line-up of 776 PTIC first-cross heifers being catalogued by Elders.

"For those needing some replacements or if you are making the change into breeders then this sale is a great opportunity to purchase quality PTIC females," Mr Carroll said.

"The heifers are looking great and many of the vendors in the sale have presented PTIC first-cross heifers in this fixture for many years and do a professional job.

"First-cross heifers make the best of mums if you're looking for females with a quiet temperament that put the absolute most into their calves, making them suitable for a wide range of markets."

Mr Roberts said the line-up of first-cross heifers would present extremely well this year after a great season in the South West.

"There have been some excellent results reported so far this season with drafts of vealer calves from first calving heifers purchased at last year's sale selling for an average in excess of $2000," Mr Roberts said.

"The performance of the first-cross breeder is impressive and they produce a wonderful product that is in high demand from both processors and lotfeeders.

"Congratulations to the vendors who have done an exceptional job again in preparing the heifers, especially for this sale that comes with pregnancy and calving length guarantees and treatments for purchasers.

"The market is up considerably compared to the time of last year's sale and buyers can select and buy heifers at the sale with confidence."

Making up 86 per cent of the total catalogue, Angus-Friesian heifers will again dominate the yarding with 11 vendors set to offer 667 heifers. An example of the Hereford-Friesian heifers that form part of the largest individual consignment of heifers to be offered by original sale vendors Michael and Loretta Roberts and family, KS & EN Roberts & Son, Elgin, at this year's Elders Springing Heifer Sale on Friday, December 10, 2021, commencing at 11.30am. The Roberts family will offer 221 PTIC first-cross heifers consisting of 140 Angus-Friesian heifers, 33 Murray Grey-Friesian heifers and 48 Hereford-Friesian heifers, all synchronised AI or naturally mated to Limousin sires and due to calve from January 20, 2022 for 20 days or from February 10 for four weeks.

The Roberts family is a renowned producer of mated first-cross heifers and will offer a total draft of 221 quality heifers which are all mated to Limousin sires.

The Roberts heifers have been carefully sourced from reputable local South West dairies many of which they have been buying off for a number of years.

When selecting the heifers the Roberts look for females that have good shape, frame, type and temperament.

A feature of the Roberts' draft is a majority of the heifers are synchronised AI mated, giving buyers the opportunity to select heifers with a tighter 20-day calving period.

The 111 PTIC Angus-Friesian, 23 Murray Grey-Friesian and 40 Hereford-Friesian heifers are synchronised AI mated to proven Limousin bull Unison Nadire N93 and due to calve from January 20 to February 9 for 20 days.

The polled bull was chosen for its calving ease, shape and temperament.

The balance of the Roberts' draft consists of 29 PTIC Angus-Friesian, 10 Murray Grey-Friesian, eight Hereford-Friesian heifers (three are red factor) naturally joined to Unison Limousin sires and are due to calve from February 10 to March 10.

The heifers have been treated twice with Pestigard and Ultravac 7in1 prior to joining and received Multimin and an Eclipse drench in September.

Candyup Farms, Benger, is the next biggest vendor with 115 heifers nominated which have all been joined to Limousin sires.

Broken down Candyup Farms will offer 63 Angus-Friesians, 14 Hereford-Friesians and two Montbeliarde-Friesians which are synchronised AI mated to an apricot Balamara Limousin bull and due to calve for 20 days from January 29 to February 8. After celebrating the sale's 30th anniversary last year in style with prices hitting a record high, this year vendors will be hoping for much the same when the sale is held at the Boyanup saleyards on Friday, December 10, 2021, commencing at 11.30am. In the sale another outstanding line-up of 776 PTIC first-cross heifers will be offered.

The heifers, which were purchased in and prepared with this sale in mind, have been treated with Multimin, 5in1 and an Eprinex drench twice.

The Jilleys have been producing first-cross heifers since 1973 and the former dairy farmers source all heifers from select dairy breeders throughout the South West at various unjoined first-cross female sales.

They select a specific type of heifer from non-Jersey herds, resulting in a big line of very even heifers presented from their J-BAS 8 accredited property.

The Jilley's heifers were mated to Unison Limousin sires and have an 11-week calving period from February 1 to April 19.

The beautifully quiet, well-grown heifers have been treated twice with Pestigard.

The heifers have been joined to low birthweight Sheron Farms Angus bulls and are due to calve from February 1 to April 12.

The Ridley's heifers received two rounds of Pestigard, are vaccinated with 7in1 and have had Multimin administered and been backline drenched.

The heifers were sourced from local dairies as unjoined heifers, both onfarm and at Boyanup sales.

The extremely quiet cattle are handled a lot during mating while there is a strong emphasis also placed on temperament when selecting the heifers.

All heifers were purchased as unmated heifers and prepared and joined especially for the sale at their J-BAS 8 accredited property.

The heifers have been joined to Gandy Angus bulls and will calve for 12 weeks from February 2 to April 21.

They have been treated with Pestigard, drenched with Dectomax and received B12 and selenium treatments.

The owner-bred heifers, which are by Blackrock and Monterey Angus bulls, are PTIC to Unison Limousin bulls and due to calve from February 1 to April 12 for a 10-week calving period.

The heifers have been treated with Ultravac 7in1 and drenched with Cydectin.

Longterm sale vendors the Milner family, Milners Farm, Busselton, who traded for a long-time as AJ Milner, will offer 49 owner-bred Angus-Friesian heifers from their dairy property. 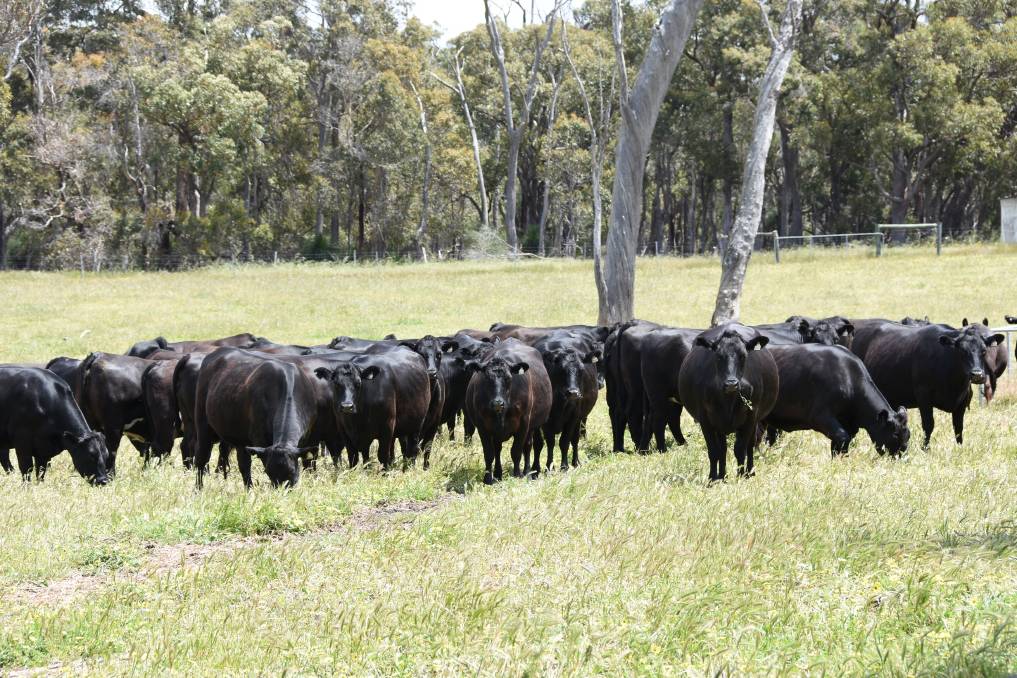 Long-term sale vendors the Milner family, Milners Farm, Busselton, will offer 49 PTIC Angus-Friesian cross heifers in this year's sale which were bred in their dairy operation. The heifers are due to calve to Angus bulls from January 19 for 10 weeks.

The Milners, who run a milking herd of 180 head, have a long association with the sale dating back to when it was held in Busselton and their heifers are always chased by return buyers.

The Milners aim is to breed a big, open female so buyers of their heifers will have a nice breeder going forward suitable for producing top quality second-cross calves.

The heifers are due to calve for 10 weeks from January 19 to March 30.

Second year vendor KL Smeathers, Northcliffe, will offer a draft of 35 Angus-Friesian heifers that are due to calve to Angus bulls for eight weeks from February 9 to April 11.

Its offering will consist of 28 heifers which have been joined to Angus sires.

The owner-bred heifers are due to calve for eight weeks from February 3 to March 31.

The Merritt family, Elgin Dairies, Elgin, who have been selling in the sale for a handful of years, will offer a total draft of 23 Angus-Friesian owner-bred heifers from their J-BAS 8 accredited dairy operation.

The consignment consists of 21 heifers synchronised AI mated to an Angus sire which have a 20 day calving from February 8 to 28 and two heifers which are PTIC to an Angus sire and due to calve for four weeks from March 16.

All Elgin Dairies heifers have been vaccinated with 7in1.

Rounding out the vendors is Ryeland Dairy, Boyanup, with 19 owner-bred heifers.

The offering will be made up of 15 Angus-Friesian heifers and four Murray Grey-Friesian heifers, which have all been synchronised AI-mated and backed up to an Angus bull.

The line has a 12 week calving period from February 3 to April 27.