POTENTIAL: Agricultural soil carbon farming is here to stay and landholders across the country are starting to explore what this means for their financial planning.

The accessibility of a carbon trading is getting easier.

EXISTENTIAL to soil health, farm productivity and longevity, the power of carbon in the form of soil organic matter has been our focus in the past few months (you can find part one here, part two here and part three here).

After the climate change summit COP26 in Glasgow has officially given international carbon trading the green light, carbon farming and generating carbon credits from agricultural farmland has been making headlines globally.

With the value of carbon having more than doubled in Australia over the last 12 months and our own government announcing heavy investments into soil carbon sequestration technology, agricultural soil carbon farming is here to stay - and landholders across the country are starting to explore what this means for their financial planning.

But soil carbon farming in Australia hasn't been easy.

From a project management perspective, the biggest barriers to entry have been knowledge, cost and time.

Thanks to rapid technological advances in the past 12 months however, this is now changing.

Melbourne-based company Carbon Count has been playing a key role in transforming the soil carbon farming market by slashing the costs of running a soil carbon project for agricultural consultants in half. 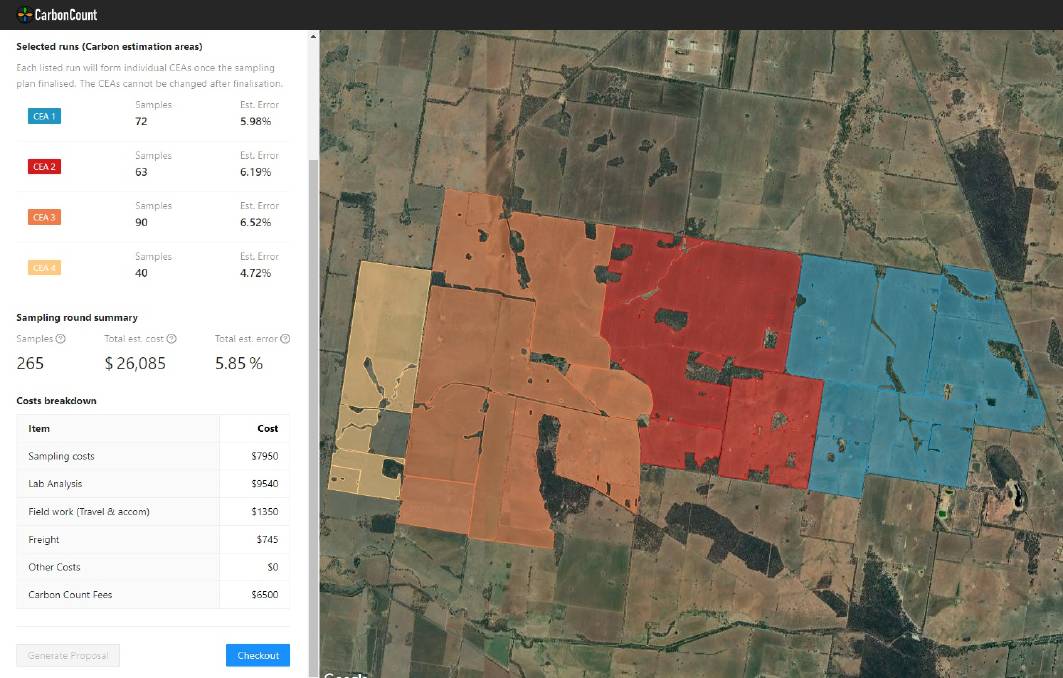 DETAIL: The patented Fast Adaptive Algorithm for Soil Testing (FAAST) can determine the most cost-effective sampling plan for any farm in any region. This particular farm spans across 8500ha.

An intelligent soil carbon project management SaaS platform, Carbon Count is built on the Clean Energy Regulator's ERF soil carbon method and breaks the complicated process of running such a project down into five simple steps - and performs all mathematical calculations and reporting required by the government.

At the core of this platform is it's revolutionary sampling plan design tool which features the FAAST algorithm that, within minutes, creates the most cost-effective sampling plan for any farm in any region.

Sampling plan creation is a crucial step to get right first-time round, as inaccuracies quickly diminish potential profits.

Rainfall controls sequestration rate - not quantity.As a result of past practices, organic matter has declined by as much as 90 per cent in our landscape.

Clearly capacity to store carbon is not the problem.

We can't control the rainfall, but as discussed in this series, we can increase the sequestration quantity by controlling the other soil factors that aid sequestration, pH, charge, C:N:P:S ratio and fungi/bacteria ratio. Thus the potential to sequester carbon is overall huge, but the sequestration rate (annual return) is highly variable according to increased rainfall.

Commencing a land management practice focused on building soil organic matter and/or improving soil charge, will not only allow you to have another potential income stream from carbon credits, but will improve farm profitability through less cost of sales resulting from improved soil health.

We at Carbon Count have made it our mission to regenerate agricultural landscape, climate and community through technological innovation.

Whether you're looking to make your land more resistant to drought and flood or also diversify farm income by entering the carbon trading market - we invite you to start your carbon journey with us today by visiting www.carboncount.com.

The story The dawn of soil carbon farming in Australia first appeared on The Land.