It was the Riverina's turn to cop wild weather last week, widening the area of NSW likely to suffer major grain quality downgrading. 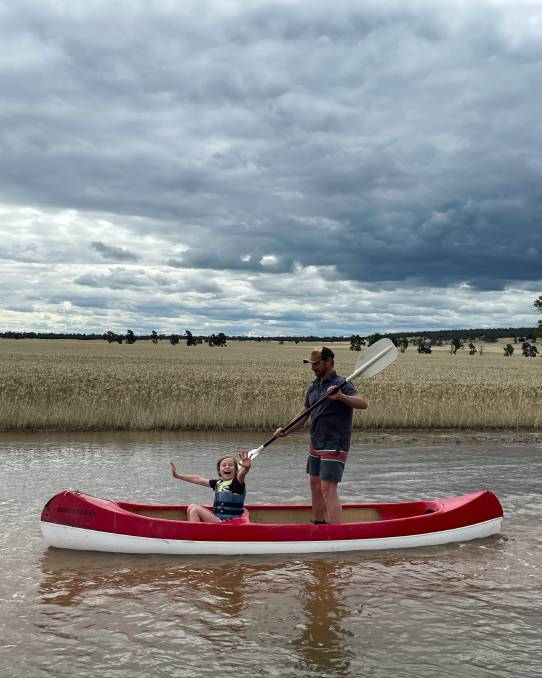 WEATHER FOR DUCKS: Brad Morris takes son Lachlan on a once in a life time aquatic crop tour at the family's property between Barellan and Narrandera. The northern Riverina bore the brunt of heavy storms last week. Photo: Sarah Morris.

WITH the heaviest rain over NSW's cropping belt set to dissipate in coming days before potential further nuisance falls early next week grain growers are getting a handle on the extent of downgrading after a record-breaking wet November.

Nearly all the state's cropping belt has received significant rain in the past week, with flood warnings on many of the state's inland rivers.

Previously the rain had centred on the north-west and the Central West, but last week it also hit the Riverina.

Wagga Wagga had over 70mm and Narrandera over 100mm with isolated higher totals through the region as thunderstorms swept through.

Market Check head of strategy Nick Crundall said the best placed to avoid serious downgrading would be in areas where crops were not fully ripe.

"The far south-east and some of the elevated, cooler areas, places like Harden, perhaps the downgrading will not be as bad, provided we don't see further rain," Mr Crundall said.

"There will still be issues with protein but hopefully we don't see the grain shooting and causing issues with the falling numbers test," he said.

Mr Crundall said further north and west farmers were resigned to having their wheat downgraded to feed.

"The only bright spot is that at this stage we are not hearing much in the way of abandonment of crops so they are still set to generate good incomes from the paddocks given the high feed wheat price."

Grain Growers chairman Brett Hosking said he was expecting the worst in terms of quality.

"We don't really have a clear picture yet and we won't fully know until people get back into harvesting in earnest but unfortunately the anecdotal stories are that it is every bit as bad as we thought," Mr Hosking said.

"However, still having a harvestable crop after the plants in some cases have been standing in water for several days is testament to modern varieties and is at least some source of income for growers," he said.

The dry spell over coming days will be welcomed however NSW growers are keeping an anxious eye on the medium term outlook, with some forecasts predicting moderate falls early next week.

Mr Hosking said the total amounts were not necessarily the problem but the fact it was rain on already damaged grain.

"You often find crops will tolerate one rain but then start sprouting with the second one, even though the totals are not that high," he said.

Further south, while largely avoiding the rain that has plagued NSW and parts of SA over harvest, Victorian croppers are observing quality issues of their own.

In particular frost damage has been more widespread than anticipated, especially in the Wimmera.

Barley has been downgraded to feed 2 or 3 quality due to poor test weight and high screenings caused by the frost, while canola yields are down due to issues with spring frosts.

Lentil harvest is only just beginning but many growers say that visually the lentils look like the crop that could be most hard hit by the frost.

However Mr Hosking said in his area of the Mallee while yields were not exceptional compared to the big crops in the Wimmera, there had been no widespread issues with frost.

"The crops have yielded what we thought or perhaps a tiny bit better which is nice."